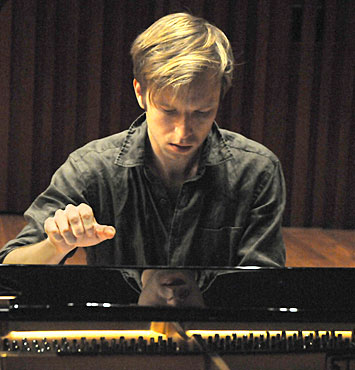 Pianist Hunter Noack will present his themed program, In a Landscape, at the U.S. Department of Energy's Brookhaven National Laboratory on Wednesday, December 16, at noon in Berkner Hall. The show at Brookhaven will include ten musical visions inspired by natural, imaginary, and man-made scenes, ranging from a water nymph to a cotton mill. Sponsored by Brookhaven Science Associates, the event is free and open to the public. All visitors to the Laboratory 16 and older must bring a photo I.D.

In addition to piano performance, Noack produces and composes for theater and film. In 2012, with playwright Joel Heinrich, Noack devised the sell-out premiere of The Sister, an immersive play at SOMArts in San Francisco. In London, he won the 2013 Guildhall School of Music and Drama's coLABorate Award for which he received resources to experiment with atypical formats for presenting live classical music. His show, Transfigured Night, premiered at the Barbican Center in April 2014, which Musical Opinion Magazine called "a very auspicious debut indeed."