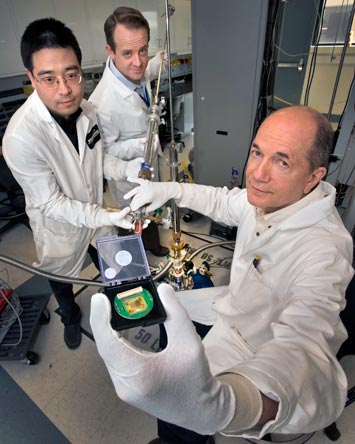 Jie Wu, Anthony Bollinger, and Ivan Bozovic (left to right) loading a sample in an apparatus capable of reaching a temperature one-third of a degree above absolute zero. The film held by Bozovic was made from a compound containing lanthanum, strontium, copper, and oxygen, and was grown with a continuous variation of chemical composition from one side to the other. The electrical resistivity of the resulting samples, each with a slightly different chemical composition, can be measured simultaneously.

UPTON, NY—Using a highly controlled deposition technique, scientists from the U.S. Department of Energy's (DOE) Brookhaven National Laboratory have synthesized ultrathin films containing multiple samples of a copper-oxide compound to study the compound's electronic behavior at near absolute zero, or minus 459 degrees Fahrenheit. This technique, as described in a paper published in this week's Online Early Edition of the Proceedings of the National Academy of Sciences, is helping scientists understand how electrons behave as this material transitions from being an insulator to a superconductor capable of carrying electric current with no resistance.

"We are trying to understand the mechanism of the insulator-superconductor transition in a family of compounds called the cuprates. These compounds become superconducting at relatively high temperatures—minus 200 degrees Fahrenheit—in comparison to most superconducting materials, which require temperatures within a few degrees of absolute zero," said Jie Wu, lead author on the paper and a physicist in Brookhaven Lab's Condensed Matter Physics and Materials Science Department. "Characterizing this mechanism may provide insight into how we can make the superconducting temperature even higher, possibly even reaching room temperature."

This capability would enable electricity to be transferred much more efficiently. "Imagine a power line that carries electricity without any energy loss. We could wire the whole planet, resulting in trillions of dollars in savings and reduced environmental impact," said Wu.

In their native state, cuprates are insulators; they do not readily conduct electricity. But cuprates can become superconducting when chemically "doped" with strontium atoms, which produce free-moving electrons that pair up in the crystalline copper-oxide layers where superconductivity is known to occur.

At a certain reduced doping level, however, superconductivity weakens and eventually disappears. As the cuprates' superconducting temperature is lowered to near absolute zero, resistance increases somewhat (a characteristic of insulators) yet conductivity remains quite high (a characteristic of metals). The nature of this strange "insulating" state has been a puzzle to scientists for years.

Solving the puzzle requires a method of fine-tuning the doping level to incrementally approach the quantum critical point—the "tipping" point at which a material is on the cusp of transitioning from one state of electronic order to another, similar to the phase change that happens when ice melts into liquid water. It also requires a highly sensitive way to measure the electronic changes corresponding with the different doping levels.

One film, many samples

To study the insulator-superconductor transition in fine detail, the scientists synthesized films of a compound containing lanthanum, strontium, copper, and oxygen. They used a combinatorial molecular beam epitaxy system at Brookhaven that places materials onto a substrate, atom by atom, in a layered manner and at tightly controlled deposition rates.

Through photolithography, a technique of transferring a geometric pattern onto a substrate, the scientists patterned single-crystal films into a linear "combinatorial" library containing 30 samples, each with a slightly different chemical doping level near the quantum critical point. To provide the electrical contact needed to measure the resistivity of the samples, they evaporated gold pads onto the films' surface.

"We programmed the system to vary the doping level continuously and very precisely at a set minute increment," said Ivan Bozovic, co-author on the paper and a senior physicist in Brookhaven's Condensed Matter Physics and Materials Science Department.

The scientists then measured the electrical resistivity of the samples with varying temperatures, magnetic fields, and doping levels near the quantum critical point. Two types of measurements were taken: one parallel to the electrical current (longitudinal resistivity) and one perpendicular (Hall resistivity).

"The Hall resistivity is much more sensitive because it measures the voltage at a particular cross section of the sample. Longitudinal resistivity averages the whole section," said Wu. "Our Brookhaven team is the first to use this more localized approach that can give us a direct measurement of the density of mobile electrons."

At a fixed low temperature, decreasing the doping level or increasing the applied magnetic field both suppressed superconductivity, allowing a competing state of electronic order to take over. Dramatic fluctuations appeared in the Hall resistance below a critical temperature, and these fluctuations increased in frequency and magnitude as all samples were further cooled toward absolute zero, indicating that they are of quantum origin.

"The behavior of these fluctuations is opposite to that seen in fluctuations driven by thermal energy, such as the vapor bubbles that appear when water is boiled," said Wu. "The bubbles fade away as the temperature is lowered."

The scientists' data reveal that, at near-absolute-zero temperatures, the superconducting state competes with another state of electronic order characterized by the random distribution of many small charge "clusters," or localized groups of electrons. Unlike the free-flowing electrons in metals and superconductors, the electrons in these clusters are localized and pinned to particular atoms, rendering them immobile and unable to carry current when an electric field is applied. The clusters can hop around and trade places in the lattice as a result of quantum fluctuations.

"This picture explains the weak conductivity of this strange "insulating" state, revealing that the state originates from localization of charges," said Wu. "Our conclusion builds upon our understanding of the insulator-superconductor transition in an important class of high-temperature superconductors. We are one step closer toward our goal of predicting and designing new superconducting materials with superior properties for energy applications."