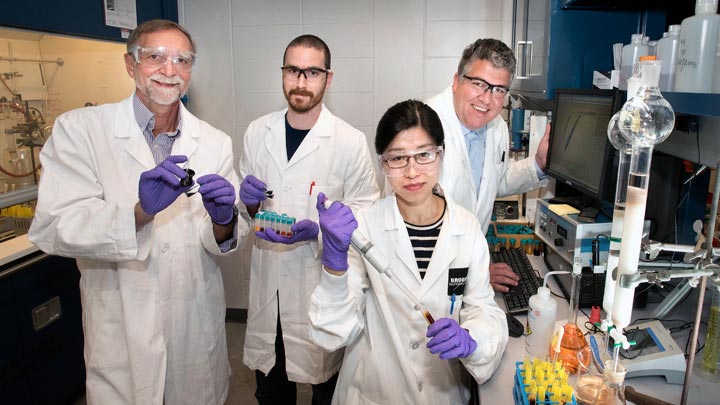 UPTON, NY—For years, scientists have been trying to emulate photosynthesis, the process by which plants, algae, and some bacteria harness light from the sun to chemically transform water and carbon dioxide into energy that is stored for later use. An artificial version of photosynthesis could provide a clean, renewable source of energy to help satisfy society's growing demands. For artificial photosynthesis to become a viable alternative to fossil fuels, the efficiency and speed of water oxidation—the reaction that turns water into oxygen gas, hydrogen ions, and electrons—is one of the processes that must be improved.

Now, a team of scientists from the U.S. Department of Energy's Brookhaven National Laboratory, Adam Mickiewicz University, and Baruch College, City University of New York, has synthesized two new molecular catalysts for water oxidation. The catalysts—complexes of ruthenium surrounded by binding molecules (ligands) containing phosphonate groups—accelerate the formation of the oxygen-oxygen bond, usually the most energy-intensive and slowest step of water oxidation. Initial studies, described in a paper published on May 11 in Angewandte Chemie International Edition, demonstrated that these ruthenium complexes could offer a low-energy pathway to faster water oxidation.

"Storing solar energy as hydrogen fuel or carbon-based fuels like methanol requires catalysts that can oxidize water at fast rates, with high efficiency, and for long periods of time," said Javier Concepcion, an author of the paper and a chemist in the artificial photosynthesis group at Brookhaven Lab. "Our ruthenium complexes catalyze the oxygen-oxygen bond formation faster than any other known catalysts, generating hundreds of oxygen molecules per molecule of catalyst per second. With these catalysts, the electrical potential required to start the reaction is approximately 10 times less than that of a AA battery."

In water oxidation, four protons and four electrons—required in a subsequent reaction to convert carbon dioxide into usable energy—are removed from two water molecules, and an oxygen-oxygen bond is formed. For water oxidation to occur, the bonds between hydrogen and oxygen atoms in the two water molecules must be broken. In the case of artificial photosynthesis, a chemical catalyst triggers this molecular breakup.

"Water is a very stable molecule, so getting two water molecules to react with each other is very difficult," explained first author Yan Xie, a doctoral candidate at Stony Brook University and a research assistant in Brookhaven's artificial photosynthesis group. "Our ruthenium complexes provide the reactivity needed to break those bonds."

The paper describes details of the series of steps through which the catalyst initiates and completes the reaction. In short, one of the water molecules binds to the ruthenium complex and loses protons as the complex is oxidized (loses electrons), resulting in an electron-deficient ruthenium-oxo group. Then, with the assistance of a phosphonate group, the other water molecule reacts with this highly reactive ruthenium-oxo to release molecular oxygen (O2).

"The phosphonate group accepts protons, or hydrogen ions, from water," said coauthor David Shaffer, a research associate in Brookhaven's Chemistry Department. "It is positioned near the active site of the ruthenium complex where water oxidation occurs. Incorporating the phosphonate group and ruthenium in a single complex makes it easy for the water molecule to find that one site and react." Eventually, the protons are transferred from the phosphonate group to the surrounding solution.

Studying the electrochemistry of the ruthenium complexes

To determine the efficiency and rate of water oxidation with the ruthenium catalysts, the team studied the electrochemistry of each oxidation state by applying different voltages and measuring the amount of current flowing through the system at various pH values (the concentration of protons in the solution).

"The voltage at which catalysis starts tells you about the energy efficiency of water oxidation, while the current tells you how quickly water oxidation is occurring," explained Concepcion. "Our ruthenium complexes minimize the amount of energy lost as heat, both in terms of the voltage and the rate that would be required for the catalyst, if incorporated into a device, to make use of all incoming sunlight."

The team also used computational modeling to study the activation parameters—the energy and molecular order—required to break and make bonds during the key reaction between the water molecule and the ruthenium-oxo group.

The computational studies showed why the phosphonate group resulted in faster catalysis. "Phosphonate is a good proton acceptor, so it energetically favors the reaction. Because it is part of the ligand, it is already positioned and ready to interact with water, removing the need for a more ordered arrangement of molecules," said Concepcion.

From separate studies, the scientists were able to tell that one of the oxidation steps—not the oxygen-oxygen bond-formation step—was limiting the rate of the catalysis. The team is now developing second-generation catalysts to optimize this step.

Eventually, they hope to make equally reactive catalysts using metals such as iron and cobalt that are more abundant and less expensive than ruthenium, but whose chemistries are much more complicated.

"By incorporating these catalysts into systems capable of absorbing sunlight and combining them with catalysts that reduce carbon dioxide or water into fuels, artificial photosynthesis could become a practical approach for storing solar energy as fuels," said Concepcion.

The research was supported by the DOE Office of Science.