Revealing the Nature of Magnetic Interactions in Manganese Oxide

UPTON, NY—For nearly 60 years, scientists have been trying to determine how manganese oxide (MnO) achieves its long-range magnetic order of alternating up and down electron spins. Now, a team of scientists has used their recently developed mathematical approach to study the short-range magnetic interactions that they believe drive this long-range order. By comparing measurements of the local magnetic interactions in MnO with those predicted by competing theoretical models, they determined that the antiparallel electron spin alignment is due to neighboring Mn ions interacting magnetically through an intermediary nonmagnetic oxygen ion—a mechanism called superexchange. 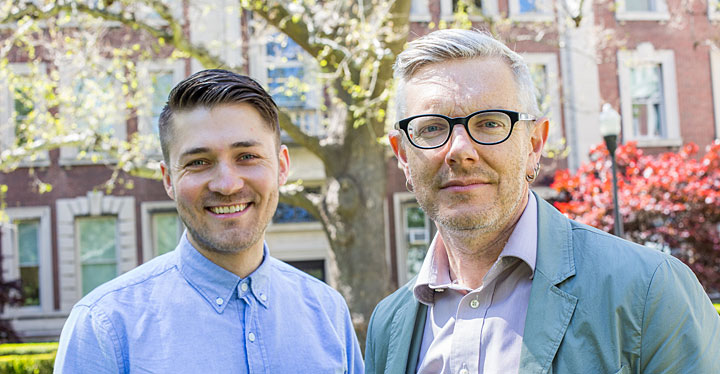 The research was described in a paper published on May 11 in Physical Review Letters by a collaboration of scientists from the U.S. Department of Energy's (DOE) Brookhaven National Laboratory, Columbia University, DOE's Oak Ridge and Los Alamos National Laboratories, Institut Laue-Langevin in France, and the University of Warwick in England. The mathematical approach, called magnetic pair distribution function (mPDF) analysis, was developed at Brookhaven Lab and Columbia University. It holds great promise as a new tool for understanding the magnetic properties of superconductors, transition metal oxides, and other materials whose electrons strongly interact.

"This research demonstrates that our technique can be used to study fluctuating local magnetism and yield important scientific insights about a material's magnetic properties, which are closely related to its ability to conduct electricity without resistance (superconductivity), change electrical resistance under an applied magnetic field (magnetoresistance), and transition from a conducting to an insulating state," said Brookhaven Lab physicist and Columbia University School of Engineering Professor Simon Billinge, lead author on the paper and co-developer of mPDF. "If we can understand how materials get these properties, we can make power transmission more efficient, increase data-storage capacity, and build smaller electrical components."

However, even above 118 Kelvin, scientists have observed fleeting, short-ranged remnants of magnetic order in the fluctuating moments, which are expected to contain crucial information about the nature of the magnetic interactions. Unfortunately, these short-ranged correlations have been very difficult to study because conventional measurement techniques are not sensitive enough to capture the details of the correlations, such as how the magnetic moments are arranged on the nanometer scale. mPDF is intended to rectify this problem.

An animation showing how the magnetic moments in manganese oxide (MnO) fluctuate at different temperatures. The orderly antiparallel alignment of the Mn ions is maintained at lower temperatures. At higher temperatures, this long-range order disappears, but short-range correlations persist underneath the thermal fluctuations.

"The ultimate goal of our research is to understand what causes these magnetic moments to line up," said Billinge.

In the MnO structure, there are Mn-O-Mn chains, and the O ion can serve as a "bridge" for the second-nearest neighbor Mn ions to exchange magnetic information through electron hops—an interaction called superexchange. Alternatively, Mn ions can directly exchange magnetic information through first-nearest neighbors (ions that are diagonal from one another) by direct electron hops through space. Both mechanisms are known to occur, but it has been unclear which one is dominant.

"Determining which of these two interactions—those between nearest neighbor spins or second-nearest neighbor spins—is primarily responsible for the ordering of the magnetic moments is key to understanding how the material gets its magnetic properties," said Benjamin Frandsen, a Columbia University graduate student in Billinge's group and the main developer of mPDF.

"As the temperature is increased, the magnetic correlations over long ranges are lost. Five neighbors over from an Mn ion, the electron spins are completely random," said Billinge. "But there are remnants of what the locally ordered state looked like. Using mPDF, we can measure patches of remaining magnetic order, even when these patches are fluctuating and short-range ordered only, and compare predictions of competing models based on superexchange versus direct-exchange interactions."

To measure the correlations, the team first conducted neutron scattering experiments to collect the data needed to apply their technique. They directed beams of neutrons at a powder sample of MnO for temperatures between 15 Kelvin and 300 Kelvin and detected the angle and energy at which the neutrons were scattered after interacting with the sample. They measured two types of scattering signals: nuclear (how the neutrons interacted with sample's atomic nuclei) and magnetic (how the neutrons' magnetic moments interacted with the magnetic moments of Mn ions).

From these signals, the team simultaneously calculated the atomic and magnetic pair distribution functions (PDF), mathematical equations that represent correlations in a sample. The atomic PDF is the probability of finding any two atoms separated by a given distance. The magnetic PDF is similar to the atomic PDF but also encodes information about the relative orientations of the electron spins. 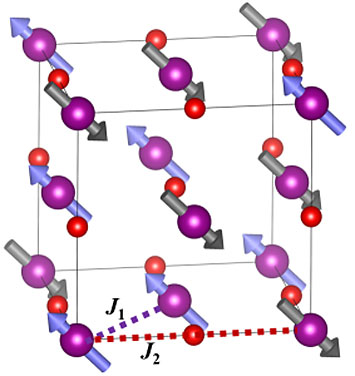 The scientists then compared these experimental measurements with the PDF signals calculated by structural and magnetic models of MnO. They also fitted models of atomic structure and magnetic order to the experimental PDF data—iteratively changing parameters such as the direction of electron spins on each Mn ion or the position of Mn ions—until the computed PDF agreed with the measured PDF. Both of these modeling capabilities are available in a software program called mPDF that the team recently made available to other scientists.

At temperatures above 118 Kelvin, the measurements revealed that local atomic structure of MnO was slightly distorted from cubic to rhombohedral, while the long-range average structure remained cubic. Analysis of the mPDF signals confirmed the existence of short-range magnetic correlations at these temperatures and revealed that they are subtly different from those in the long-range magnetic structure.

"The local structure exhibits a slightly different type of magnetic order than that found in the low-temperature average structure—for example, the second-nearest neighbor spins have significantly stronger local correlations than would be expected from the low-temperature structure," said Frandsen. "Our experimental mPDF signals do not match the signals generated by the known long-range magnetic order."

To compare competing theories for magnetic exchange, Julie Staunton of the University of Warwick led the team in calculating the magnetic correlations at high temperatures for several different magnetic exchange ratios between first- and second-nearest neighbors. The value of these ratios is theoretically predicted to be lower for interactions dominated by superexchange and higher for direct exchange. Using the calculated magnetic correlations, the scientists then calculated the mPDF and compared it to the experimental data. The predicted and experimentally observed ratios were close in value, and both pointed toward a superexchange model of magnetic interactions in MnO.

Now that scientists know that superexchange is the dominant mechanism for magnetic exchange in MnO, the next step is to determine why.

Billinge and Frandsen are also interested in using their technique to explore the magnetic interactions in other materials.

"Our technique provides a new diagnostic tool for studying the physics of strongly correlated electron systems. If we can understand the physics of these systems—how their magnetic, electronic, and structural properties relate—we can design new materials for specific applications," said Billinge.

This research was supported by DOE's Office of Science and the National Science Foundation.