UPTON, NY — Hong Ma has been named chair of the Physics Department at the U.S. Department of Energy's (DOE) Brookhaven National Laboratory, effective July 1, 2016. He succeeds Laurence Littenberg, who became Physicist Emeritus at the end of June after having worked in the department since 1974, serving as chair since 2013. Ma will oversee some of the Lab's premiere research programs, a staff of 244, and an annual budget of about $100 million for nuclear and particle physics, funded primarily by the DOE Office of Science. 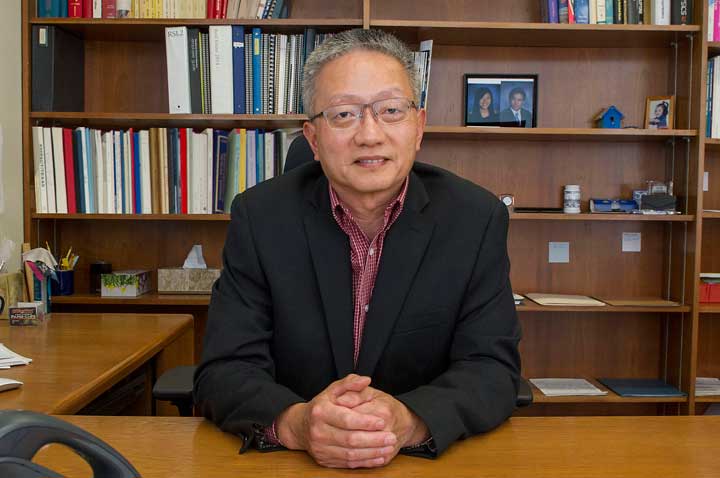 "I am very pleased that Hong Ma has agreed to lead the Brookhaven Physics Department," said Berndt Mueller, Associate Laboratory Director for Nuclear and Particle Physics at Brookhaven.  "His outstanding record of scientific leadership and broad experience provide a strong background and make him an excellent choice for this position. I also want to thank Laurence Littenberg for the excellent work he has done as chair of Physics over the past three years."

Said Ma, "It is a huge honor and responsibility to serve as the chair of this great department. The research carried out here is at the forefront of particle and nuclear physics. We are proposing, designing, and constructing the next-generation detectors while exploring the unknown with our currently running experiments. I am committed to maintaining the excellence required to do this fascinating science."

From its inception, Brookhaven Lab has had a world-renowned physics program, recognized by five Nobel Prizes in physics. Through the design and use of complex experiments and facilities at Brookhaven and throughout the DOE complex and the world, scientists in the physics department have made numerous important discoveries about the properties and interactions of subatomic particles that are helping to unravel the secrets of the universe. These discoveries include new details about the origin of mass, the astonishing properties of the quark-gluon plasma, and the mysteries of dark matter and dark energy. In addition to expanding the boundaries of human knowledge, the department's work has yielded advances in other areas of science, including new energy technologies and methods for diagnosing and treating diseases such as cancer.

Ma, who joined the Brookhaven physics staff in 1989, is best known for developing detector components for particle physics experiments at colliders. Since 1999, he has played a major role in designing and commissioning various detector systems and data analysis software for the ATLAS experiment at the Large Hadron Collider (LHC), the world's most powerful particle collider, located at the European Center for Nuclear Research (CERN). Brookhaven Lab serves as the host laboratory for U.S. scientists involved in research at ATLAS.

The research carried out here is at the forefront of particle and nuclear physics.

Ma helped coordinate the Lab's physics analysis program that contributed to the historic 2012 discovery of the Higgs boson, a subatomic particle long-predicted by the Standard Model of particle physics as the source of mass for all the other fundamental particles. He was involved at every stage of the construction of ATLAS, including making important contributions to the Liquid Argon Calorimeter, and is currently contributing to Brookhaven's efforts in the ATLAS Silicon Detector and Liquid Argon Calorimeter Upgrade for the High Luminosity LHC. His work on ATLAS built upon earlier studies Ma had carried out in the late 1980s and early 1990s on detector designs for the Superconducting Super Collider (SSC), a Texas-based physics facility that was never completed.

During the 1990s, Ma played leadership roles in planning, constructing, and carrying out experiments on the decay of subatomic particles called kaons at Brookhaven's Alternating Gradient Synchrotron (AGS). These experiments involved precision measurements of the products generated by the kaon decays—some predicted by the Standard Model but very difficult to detect, and others that might offer insight into various symmetry violating processes and/or new physics phenomena unexplainable by the existing Standard Model.

Ma earned a bachelor of science degree from Fudan University in Shanghai in 1983, and a Ph.D. in physics in 1988 from the California Institute of Technology, where he continued as a research fellow until joining Brookhaven as a research associate in 1989. He was awarded a Junior Faculty SSC National Fellowship by the Texas National Research Laboratory Commission, 1990-91. At Brookhaven, he was promoted through the ranks to physicist in 1994, group leader of the Omega Group and physicist with tenure in 2008, and senior physicist with tenure in 2016. He was an elected member of the Brookhaven Council 2011-2013, serving as secretary (2012) and chair (2013).