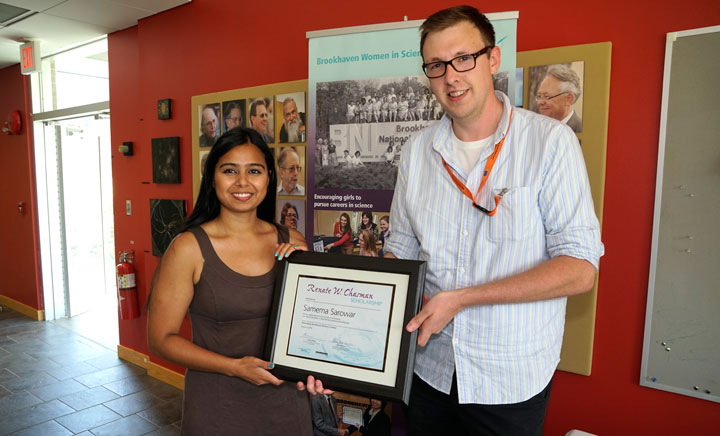 Stony Brook University student Samema Sarowar, this year's winner of the Renate Chasman Scholarship, receives a certificate from Brookhaven Women in Science (BWIS) board member Neil Robinson. The scholarship is named after the late Renate W. Chasman, a noted physicist who worked at Brookhaven National Laboratory. BWIS has awarded the $1,000 scholarship annually since 1987.

The scholarship is named after the late Renate W. Chasman, a noted physicist who worked at Brookhaven National Laboratory. Chasman's legacy includes contributions to the development of particle accelerators. BWIS has awarded the scholarship honoring Chasman annually since 1987. Under current guidelines, the $1,000 scholarship is offered to a woman who is pursuing a career in natural sciences, engineering, or mathematics. The scholarship has been awarded to 32 women since its inception.

Sarowar has been working with Brookhaven Lab researcher Huilin Li studying the role and structure of membrane uropathogenic bacterial pili, hair-like appendages found on the surface of many bacteria, and their role in cellular infection and invasion. This research may potentially influence the treatment (and possibly the prevention) of urinary tract infections.

In addition to receiving the Chasman Scholarship, Sarowar has received numerous awards. In 2013, she received Brookhaven Lab's John Dunn Excellence Award in Biosciences and SBU's Biochemistry Outstanding Service Award. In 2011, she was the recipient of the Jerome Karle Award in Chemistry from The City College of New York.

At SBU, Sarowar serves as a teaching assistant in the Department of Biochemistry, coordinating undergraduate biology lectures and laboratories. She is also an instructor for the Stony Brook Women in Science and Engineering (WISE) program.

"I am honored to receive the Chasman Scholarship because it helps highlight my background as a woman in science working on women's health issues," said Sarowar. "I became interested in structural biology because I found that understanding the mechanism and function of diseases and 3D visualization is fundamental. My experience at Brookhaven Lab will help me with scientific communication and as a liaison between drug companies and health care providers."