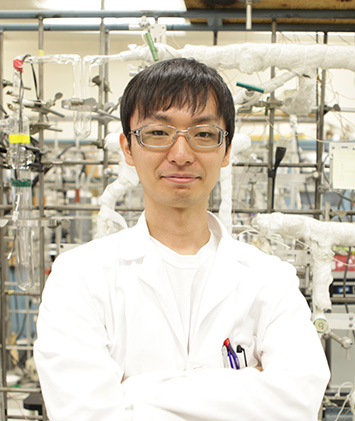 Tomoyasu Mani, pictured above in one of Brookhaven's Chemistry Department labs, is the winner of the 2016 Blavatnik Regional Award for Young Scientists in the chemistry category.

UPTON, NY—Tomoyasu Mani, former Goldhaber Fellow at the U.S. Department of Energy's (DOE) Brookhaven National Laboratory and now an assistant professor in the University of Connecticut's Department of Chemistry, has received the 2016 Blavatnik Regional Award for Young Scientists in the chemistry category. The awards, established in 2007 by the Blavatnik Family Foundation in partnership with the New York Academy of Sciences, celebrate the innovative achievements of postdoctoral scientists 42 years of age or younger who work in New York, New Jersey, or Connecticut. Mani is being recognized for his "advances in the understanding of electron transport occurring in organic photovoltaics used in solar energy capture and conversion."

"I'm very honored to be recognized by the Blavatnik Regional Award. As an early-career scientist, I appreciate the increased visibility in the field of chemistry and the larger scientific community that this award will bring me, and I look forward to continuing to make contributions to the field," said Mani. "Although younger generations of scientists may be unfamiliar with radiation chemistry or find it hard to apply to their work, my research to understand fundamental processes in organic solar cells is a good example of how radiation chemistry can provide us with valuable information that is hard or impossible to come by using other means."

Mani joined the Chemistry Department at Brookhaven Lab in 2013. The following year, he was awarded the prestigious Gertrude and Maurice Goldhaber Distinguished Fellowship, which is given to exceptionally talented candidates who have a strong desire for independent research at the frontiers of their fields. He held this appointment until August 2016, when he became part of the Department of Chemistry faculty at the University of Connecticut.

While at Brookhaven, Mani studied how delocalized electrons move through chains of organic molecules with alternating double and single bonds. Organic photovoltaic devices use these "conjugated" molecules to convert sunlight into electricity. While organic solar cells are more flexible and lightweight than the conventional silicon-based versions, their power-conversion efficiency has been limited. Understanding how the electrical charges generated by sunlight are separated and transported to produce a current is critical to increasing this efficiency.

"The challenge is to characterize these charged species in the non-polar environments where the electricity-producing chemical reactions occur. We are trying to elucidate the basic principles that govern the nature of charges on a very fundamental level in such an environment," said Mani.

To investigate the nature of charges in conjugated molecules, Mani combined chemical synthesis (to make the molecules), pulse radiolysis (to inject charges into the molecules), infrared spectroscopy (to study the atomic vibrations of these charged molecules), and theoretical analysis (to understand how the electrons move). His research demonstrated that molecular vibrations provide insights into the nature of charged species that can help scientists design better molecules and materials for harnessing and storing solar energy.

"For someone only a few years out of graduate school, Tomo has made impressive accomplishments," said John Miller, leader of Brookhaven's Electron- and Photo-Induced Processes Group and Mani's former advisor. "He came up with several innovative ideas and designed and carried out experiments to test these ideas, often using sophisticated equipment such as accelerators and performing complex theoretical computations. Creativity, initiative, and enthusiasm are important characteristics of a young scientist, and Tomo has them all."

A distinguished jury of senior scientists and engineers selected Mani from among 125 nominations submitted by 24 academic and research institutions in the New York tri-state area. One winner and two finalists were selected in each of the three award categories: life sciences, physical sciences and engineering, and chemistry. Winners each receive $30,000; finalists receive $10,000.

"Tomo asked important science questions and was creative in designing new molecules to test his ideas, adept in chemical synthesis, astute in using the unique capabilities of the division's Accelerator Center for Energy Research, and insightful in his collaborations to understand how his results could give new meaning to molecular charge dynamics," said Alex Harris, chair of the Chemistry Division at Brookhaven. "We expect more great work will come from him, and we look forward to continuing our collaboration with him while he is at the University of Connecticut."

This fall, Mani is teaching a course on advanced physical chemistry and leading a new research group that seeks to understand how to control electronic excited states, charge and energy transfer reactions, and spin dynamics in molecules and molecular assemblies. For his research, he continues to combine various approaches, including chemical synthesis, photo- and radiation-chemistry experimental techniques, and theoretical and computational analysis. Part of his computational work will involve the use of the computer cluster at the Center for Functional Nanomaterials, a DOE Office of Science User Facility at Brookhaven Lab. Mani will be back at Brookhaven from October 10 through 14 to discuss his research at the 2016 International Conference on Ionizing Processes.

Mani regularly presents his work at conferences and is invited to talk at institutes throughout the United States and abroad. For the past five years, he has been mentoring undergraduate and graduate students. His professional memberships include the American Chemical Society, the American Association for the Advancement of Science, and the Japanese Photochemistry Association. He earned a BS in biochemistry from the University of Texas at Dallas in 2009 and a PhD in biochemistry and molecular biophysics at the University of Pennsylvania in 2013.

Mani, the other two regional award winners, and the six regional finalists will be honored at a ceremony during the New York Academy of Sciences Annual Gala on November 7, 2016 in New York City.