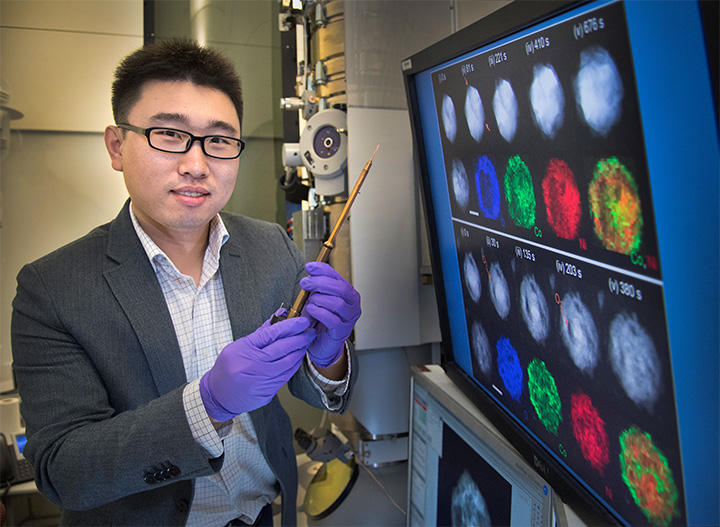 Huolin Xin of Brookhaven Lab's Center for Functional Nanomaterials with a sample holder in front of the electron microscope his team used to track the chemical and structural evolution of catalytic nanoparticles in 3D.

UPTON, NY— Catalysts are at the heart of fuel cells—devices that convert hydrogen and oxygen to water and enough electricity to power vehicles for hundreds of miles. But finding effective, inexpensive catalysts has been a key challenge to getting more of these hydrogen-powered, emission-free vehicles out on the road.

To help tackle this challenge, scientists at the U.S. Department of Energy's (DOE) Brookhaven National Laboratory used a high-resolution electron microscope to study nanoscale details of catalytic particles made of nickel and cobalt—inexpensive alternatives to the costly platinum used in most fuel cells today. A paper describing the research in the journal Nature Communications includes 3D, dynamic images that reveal how the particles' external and internal structure and chemical makeup change as they become catalytically active. Understanding these nanoscale structural and chemical features will help scientists learn what characteristics make the inexpensive particles most effective—and devise ways to optimize their performance.

This movie shows the differential distribution of cobalt, then nickel, then the two elements combined within a single particle. Cobalt is preferentially located on the exterior surface and along the internal surfaces of pores where it can react with oxygen.

One of the most important characteristics of a catalyst is having a high surface area compared to its volume. "Reactions happen on the surface," explained Huolin Xin, who led the work at Brookhaven's Center for Functional Nanomaterials (CFN). The more surface area there is, the higher the reactivity.

Tiny nanoparticles naturally have a large surface-to-volume ratio. However, the imaging techniques Xin and colleagues used to study the bimetallic nickel-and-cobalt particles revealed that these nanoparticles increase their surface area in an additional, unique way.

A comparison of two different oxidation results in nickel-cobalt nanoparticles. While a small percentage of the particles form hollow spheres (top), the vast majority form a porous Swiss-cheese-like structure (bottom) that has much greater surface area for the same volume.

The transformation happens when the nanoparticles are oxidized. Instead of forming a metal oxide shell enclosing a single void in the center—as single-metal materials such as nickel and cobalt do—the bimetallic particles developed an extremely porous "Swiss cheese" like structure that was no longer hollow, Xin said.

"This is the first time anyone has shown how a bi-metallic material forms these Swiss cheese structures," Xin said.

Because the porous structure has a higher "packing density"—meaning more reactive material is packed into a smaller space than in hollow nanoparticles—it should result in higher catalytic activity, Xin said. The porous particles may also make stronger structures, which would be particularly useful in applications where mechanical specifications exclude weaker hollow structures, such as batteries.

This imaging technology gives us an accurate way to … understand why one catalyst will perform better than another.

Revealing the details of how these structures formed, including their chemical makeup, was no simple task. The scientists used chemical-sensitive electron tomography, which is a nanoscale version of a CAT scan, to track what was happening structurally and chemically on the surface and inside the particles in 3D as they were oxidizing. This process occurs as the sample is heated to 500 degrees Celsius.

"We custom-designed a sample holder that could withstand that change in temperature, while also letting us tilt the sample to scan it from every angle—all within a transmission electron microscope," Xin said.

These capabilities are unique to the CFN, a DOE Office of Science User Facility that offers both state-of-the-art instruments and the expertise of scientists like Xin to the entire scientific community through its user program.

"In the first stage, oxidation occurs only on the surface, with metal ions moving out of the particles to react with the oxygen forming an oxide shell," Xin said. "In the second stage, however, oxidation starts to happen on the inside of the particles as well, suggesting that oxygen moves in."

The scientists suspected that tiny pinholes were created on the particles' surface as the oxide shell was forming, providing a pathway for the influx of oxygen. A closer look at one partially oxidized particle confirmed this suspicion, showing that as the oxide formed on the surface, it beaded up like droplets on a water-repellent surface, leaving tiny spaces in between.

The scientists also used "electron energy loss spectroscopy" and the distinct "chemical fingerprints" of nickel and cobalt to track where the individual elements were located within the particles as the oxidation process progressed. This gave them another way to see whether oxygen was finding a way into the particles.

"We found that cobalt moves preferentially to where the oxygen is," Xin explained. "This is because cobalt reacts more easily with oxygen than nickel does."

Three stages of oxidation of nickel-cobalt nanoparticles. Left: the pristine nickel-cobalt nanoparticle. Middle: an intermediate stage in which the formation of pinholes allows oxygen access to the interior. Right: the Swiss-cheese-like structure with dark areas representing the voids within the particle. Catalytic reactions can occur across the entire surfaces and along the inner surfaces of the pores.

During early oxidation, cobalt preferentially moved to the exterior of the particles to engage in the formation of the oxide shell. But later-stage scans revealed that the internal surfaces of the Swiss cheese pores were rich in cobalt as well.

"This supports our previous idea that oxygen is getting inside and pulling the cobalt out to the surface of the internal pores to react," Xin said.

This ability to monitor the surface chemistry of nanoparticles, both externally and along the internal curved surfaces of pores, could result in a more rational approach to catalyst design, Xin said.

"People usually try to just mix particles and create a better catalyst by trial and error. But what really matters is the surface structure. This imaging technology gives us an accurate way to determine the composition of naturally curved surfaces and interfaces to understand why one catalyst will perform better than another."