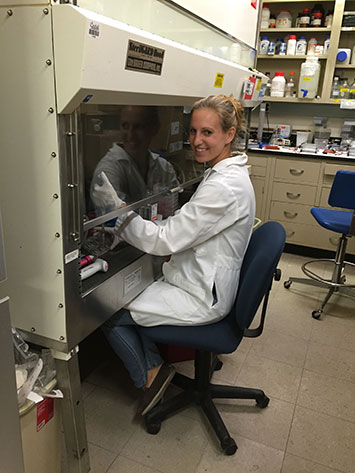 UPTON, NY — Maria Michta, an adjunct instructor who teaches microbiology at Suffolk County Community College, will give a talk, "Dream, Believe, Become," at the U.S. Department of Energy's Brookhaven National Laboratory on Thursday, December 8, at 4:30 p.m. in the Physics Department Large Seminar Room. Sponsored by Brookhaven Science Associates, the event is free and open to the public. All visitors to the Laboratory 16 and older must bring a photo I.D.

Michta began her science career at Brookhaven Lab in 2007 as a junior research associate at the National Synchrotron Light Source (NSLS) while she was studying at Long Island University-C.W. Post. In 2008, she was accepted into the U.S. Department of Energy's Science Undergraduate Laboratory Internship program and continued to do research at the NSLS. She earned her Ph.D. in microbiology from Mt. Sinai Medical School in 2014.

Michta achieved her childhood dream to become an Olympic athlete and participated in the Olympic games in London and Rio as a racewalker, completing the events in her best personal times, placing 28th in London and 22nd in Rio.

At this talk, she will discuss her journey and how she applies the same discipline, beliefs, and motivation to her training as a scientist, teacher and athlete.