Honor recognizes his work on instrumentation and standards for optical measurements 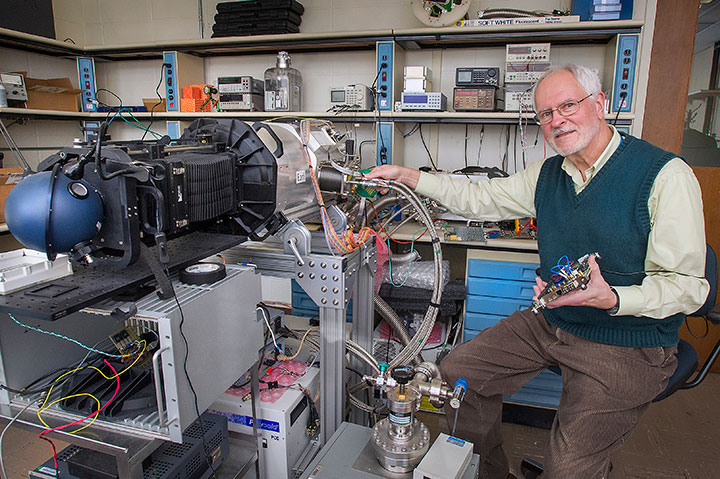 Peter Takacs with a test system that measures the imaging performance of charge-coupled device sensors used in the Large Synoptic Survey Telescope camera that is under construction in Brookhaven's Instrumentation Division. The integrating sphere on the left provides uniform illumination onto the sensors mounted in the vacuum chamber to the rear. A custom-made electronics board, held by Takacs, is used to record the images produced by the sensors. About 200 of these sensors will be used in the complete camera when the telescope begins operations in Chile in 2020.

UPTON, NY—Peter Takacs, a physicist in the Instrumentation Division at the U.S. Department of Energy's (DOE) Brookhaven National Laboratory, has been named a Fellow of the Optical Society (OSA). He is among the 96 OSA members who the society's board of directors selected to be part of the 2017 class of Fellows for their significant contributions to the advancement of optics and photonics.

Takacs is being recognized for "outstanding original contributions to grazing incidence optical metrology instrumentation, theory, practice, and standards applied to x-ray optics for synchrotrons, free electron lasers, and space instrumentation, setting the pace for major development over three decades." Optical metrology refers to the science of performing measurements with light.

"Working with some very smart people to design state-of-the-art optical systems in the early days of synchrotron science at Brookhaven Lab, I was able to recognize the need for improved synchrotron optics," said Takacs. "Because Brookhaven was not in the business of fabricating mirrors, I channeled my efforts into developing metrology instrumentation that allowed manufacturers to improve their polishing techniques and produce useful optical components for us. This was a textbook example of the old adage "If you can't measure it, you can't make it.""

With the exception of managing the metrology program for a chemical laser project at TRW Defense and Space Systems from 1982 to 1983, Takacs has been part of the Instrumentation Division at Brookhaven Lab since 1981. He first joined Brookhaven as a member of the Biology Department in 1979.

Takacs was responsible for establishing the Optical Metrology Laboratory (OML) in 1983 as part of Brookhaven's Instrumentation Division. Scientists at the OML worked to improve the quality of optical components used in synchrotron radiation beamlines at the National Synchrotron Light Source (NSLS), a former DOE Office of Science User Facility at Brookhaven (replaced in 2015 by NSLS-II with its own metrology laboratory). Every major synchrotron light source around the world now has an optical metrology laboratory modeled after the one Takacs started at Brookhaven.

Throughout his career at Brookhaven, Takacs has developed instrumentation and measurement techniques to test the surface quality of high-precision aspheric (not perfectly round) optics, such as cylindrical mirrors used to reflect x-rays at extreme grazing-incidence angles. He played a critical role in the development of the Long Trace Profiler—a surface-profiling instrument to characterize the shape of optics—and the transfer of its technology to a local small business. This technology transfer has enabled many synchrotron facilities around the world to characterize such mirrors, which are essential in building beamlines for studying nanostructured materials and thin films.

Takacs currently manages the metrology effort in characterizing the performance of charge-coupled device (CCD) sensors, which convert light into electronic signals that are digitized to produce images. He is part of the Brookhaven team that is leading the design and development of the CCD sensor array for the camera of the Large Synoptic Survey Telescope (LSST) currently under construction in Chile. One of the most critical components of LSST, the array contains more than 200 sensors that must be precisely placed on the camera's extremely flat focal plane in order to capture the light from billions of stars, galaxies, and solar system objects like asteroids and comets. When completed, LSST will rapidly survey the night sky, taking more than 800 panoramic images each night with its 3.2-billion-pixel camera, to provide an unprecedented view of our universe.

His other notable accomplishments include the development of a resolution calibration tool for optical, electron, and atomic-force imaging systems—a collaborative project with NSLS-II physicist Nathalie Bouet and researchers from DOE's Lawrence Berkeley and Argonne National Laboratories and ABeam Technologies, Inc. This technology, which was recognized with a 2015 R&D 100 Award, solves one of the most difficult problems in surface profiling and imaging metrology: the quantitative characterization of advanced imaging systems, such as interferometers and electron microscopes.

"Peter commands high international respect for his leadership in optical design and testing, particularly the metrology of optical components," said Graham Smith, head of the Instrumentation Division at Brookhaven Lab. "His recognition by the Optical Society of America is thoroughly deserved."

Founded in 1916, the Optical Society (OSA) is the leading professional association in optics and photonics, home to accomplished science, engineering, and business leaders from all over the world. Through world-renowned publications, meetings, and membership programs, OSA provides quality information and inspiring interactions that power achievements in the science of light.