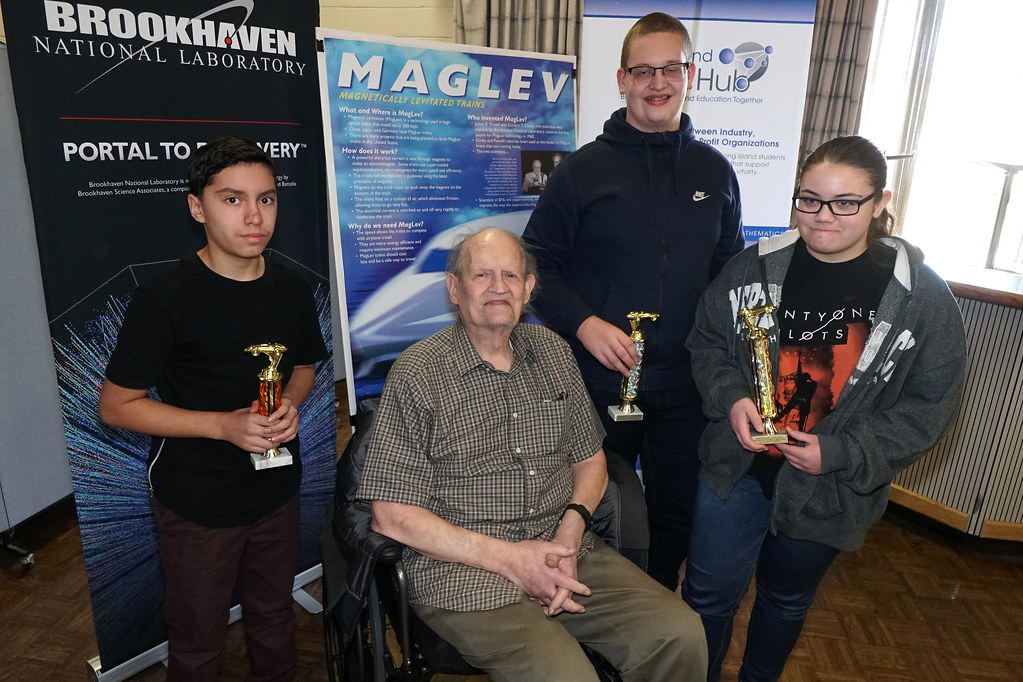 The students were welcomed by John Carter of the U.S. Department of Energy’s Brookhaven office. “The Department of Energy is proud to support educational programs like Maglev that help young people understand how science research impacts and improves our quality of life,” said Carter. “Congratulations to all of the students and their teachers who are representing their schools at the competition.”

The contest is based on research by two Brookhaven engineers, the late Gordon Danby and James Powell, who invented and patented maglev technology — the suspension, guidance, and propulsion of vehicles by magnetic forces. Powell was an honored guest at the contest and gave a brief talk encouraging students to pursue a career in science or engineering. “We are depending on young researchers like all of you,” said Powell. “You are the future of human inventions that are crucial to our very existence.”

Magnetic properties give the maglev trains their extraordinary capabilities for speed and stability. These same principles — using magnetic forces to move matter — are used in the world-class research facilities at Brookhaven Lab, including the Relativistic Heavy Ion Collider and the National Synchrotron Light Source II. Magnetic properties allow the machines to move particles at nearly the speed of light for research purposes.
Words like gravity, slow, fast, and balance could be heard with enthusiasm around the room as students tested and ran their vehicles at the various maglev track stations hoping their time would earn them a top spot in the competition.

More than 150 students from 11 Long Island middle schools entered the contest, in which they were required to design and construct model maglev vehicles according to engineering specifications in a choice of seven categories: electrified track, futuristic, wind power, gravity, self-propelled balloon, self-propelled-other, and scale-model design. Judging was based on speed, efficiency, appearance, and the students' written design process.