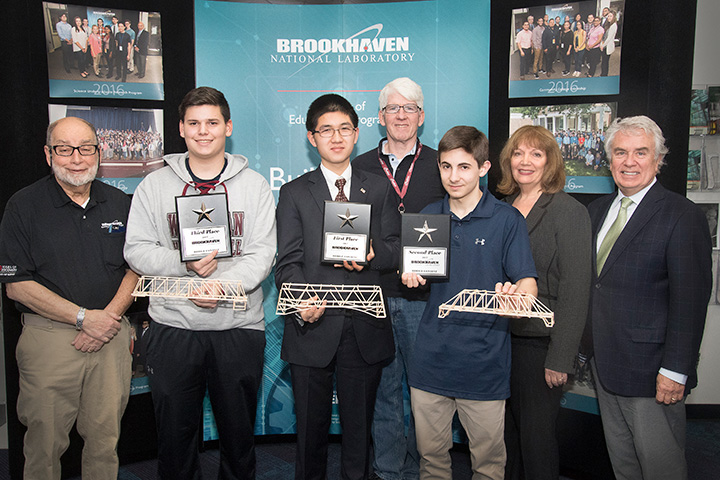 Students from 17 Nassau and Suffolk County high schools designed and constructed more than 200 model bridges intended to be simplified versions of real-world bridges. Of the 203 bridges entered in the contest, 87 bridges met the stringent specifications. In this contest, efficiency is calculated from the bridge’s weight and the weight the bridge can hold before breaking or bending more than one inch. The higher the efficiency, the better the design and construction.

Andrew Zhang of Ward Melville High School took the top spot, building a bridge that weighed 17.83 grams with an efficiency of 1048.9.

Justin Wallace of Walt Whitman High School placed second with a bridge that weighed 22.08 grams with an efficiency of 1023.7.

The construction and testing of model bridges promotes the study and application of principles of physics and engineering, and helps students develop "hands on" skills. Students get a flavor of what it is like to be an engineer, designing structures to a set of specifications and then seeing them perform their function. 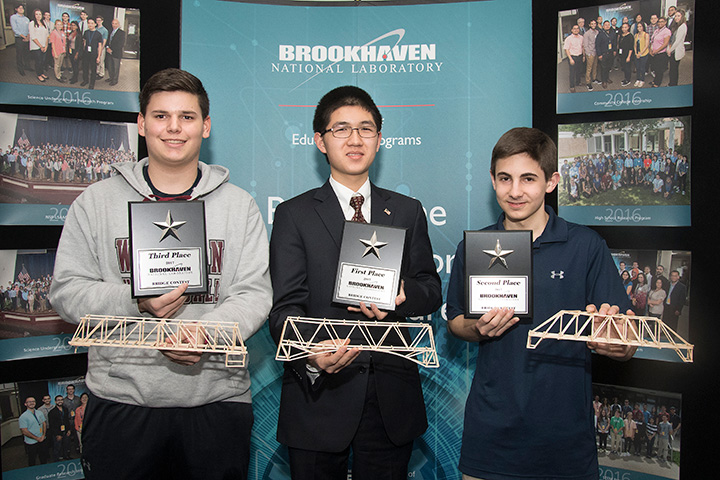 At the awards ceremony held at the Lab on March 31, retired Brookhaven Lab engineer Marty Woodle  explained how each bridge was different, yet all met the difficult criteria. “I have been testing bridges for this contest since the 1980s. Comprehending and following the precise specifications is as important as building the model bridge. It teaches our future engineers how to build things step-by-step and how to collaborate with others during the process,” said Woodle. “I congratulate every student and wish the local winners good luck at the international contest. I hope to see these students return to the Lab in the future as engineering interns.”

Evelyn Landini of the U.S. Department of Energy's Brookhaven Site Office encouraged the students to continue their good work.  “Our nation needs future scientists, engineers, and leaders like you,” said Landini.  “We encourage you to continue what you’ve started here, and hope that this bridge contest sparked your interest to consider a career path that will lead you to unraveling nature’s mysteries and the discovery of revolutionary breakthroughs that enhance our everyday lives.  Congratulations to everyone.”