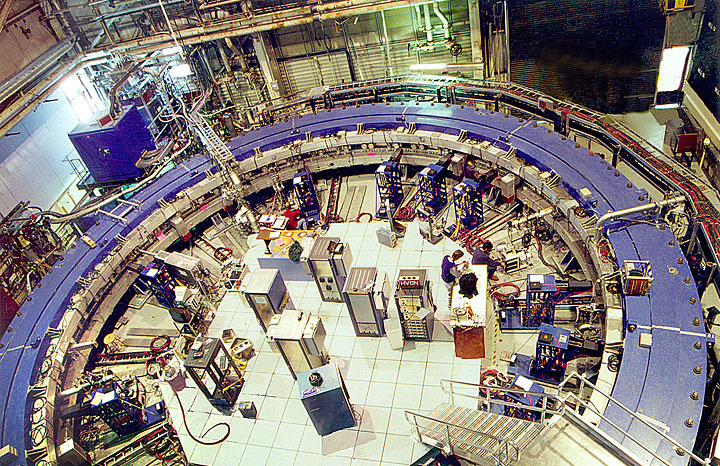 UPTON, NY — Scientists at the U.S. Department of Energy’s Brookhaven National Laboratory, in collaboration with researchers from 11 institutions in the U.S., Russia, Japan, and Germany, today announced their latest result from a ground-breaking experiment dubbed muon g-2 (pronounced gee-minus-two), a precision measurement of the anomalous magnetic moment of the muon, a type of subatomic particle. The new measurement, based on data collected in 2000, directly confronts the so-called Standard Model of particle physics and strengthens scientists’ confidence in a previous measurement reported by the same group in February 2001 (based on data collected in 1999).

The new result, with twice the precision of the earlier result, was reported today at a special colloquium at Brookhaven Lab and will be submitted to Physical Review Letters. It will also be reported at the International Conference on High Energy Physics in Amsterdam, and at the International Conference on Atomic Physics in Cambridge, Massachusetts, tomorrow.

“While not definitive, this new result is consistent with the presence of effects which are outside of the Standard Model. Further work to clarify this hint of something new is essential, nevertheless this result is very interesting and provocative. Muon g-2 may provide a door which opens onto physics beyond the Standard Model,” said Boston University physicist Lee Roberts, co-spokesperson for the muon g-2 experiment.

Vernon Hughes, the Yale physicist who initiated the muon g-2 program at Brookhaven and is the other co-spokesperson, added, “Our new, higher-precision measurement of muon g-2 provides a unique and unusually sensitive test of the validity of the general theory of electromagnetism or, equivalently of the Standard Model of particle physics. The present difference between our experimental result and theoretical predictions may indicate new physics beyond the Standard Model. Effects on g-2 of speculative new theories have been extensively discussed in the literature.”

The muon g-2 measurement is a very sensitive test of the Standard Model of particle physics, an overall theory of particles and forces that has withstood experimental challenge for some 30 years. In February 2001, however, the muon g-2 collaboration published a finding that deviated significantly from the value predicted by the Standard Model. The result of that experiment, which, like the current one, was performed at Brookhaven’s Alternating Gradient Synchrotron, had a one percent statistical chance of being explained by the theory as it was understood at that time.

Since then, perhaps because of the startling experimental result at Brookhaven, many theoretical physicists have taken a closer look at the predicted theoretical value for g-2. In October 2001, theorists reported that a mathematical error had been made in calculating the predicted value. As a result of the revised theory estimate, the measured difference from the Standard Model prediction reported by Brookhaven in 2001 was no longer as statistically significant.

The result released today is twice as precise as the previous measurement and is in excellent agreement with it, making this new measurement a much more sensitive test of the Standard Model.

In addition, the Standard Model theory value for g-2 is being refined further based on experiments at accelerators in Russia and China, and, when available, these new results will provide an even stronger test of the Standard Model.

“The ongoing dialogue between theory and experiment is typical of how progress is made in science,” said Roberts. “The intense activity in the theory stimulated by our announcement in 2001 will eventually result in a much more reliable number for us to compare our experimental result with.”

The g-2 value measures the effects of three of the four forces known to exist in the universe — the strong force, the electromagnetic force, and the weak force (but not the fourth force, gravity) — on a characteristic of these particles known as “spin,” which is somewhat similar to the spin of a toy top. Using Standard Model principles, theorists can calculate with great precision how the spin of a muon, a particle similar to but heavier than the electron, would be affected as it moves through a magnetic field.

The scientists and engineers led by Hughes and Roberts have been collecting data at Brookhaven since 1997. “This experiment makes use of a very intense source of muons, the world’s largest superconducting magnet, and very precise and sensitive detectors to measure g-2 to a much higher level of precision than previously possible,” said William Morse, the Brookhaven resident spokesperson for g-2.

At present, the team has one more data set, collected in 2001 and currently being analyzed, which will further increase the precision of their measurement.

This research was funded by the U.S. Department of Energy, the U.S. National Science Foundation, the German Bundesminister fur Bildung und Forschung, and the Russian Ministry of Science, and through the U.S.-Japan Agreement in High Energy Physics.