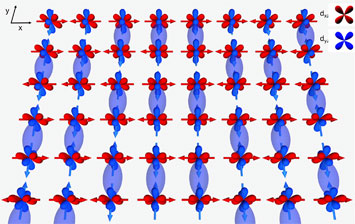 Iron-based superconductivity occurs in materials such as iron selenide (FeSe) that contain crystal planes made up of a square array of iron (Fe) atoms, depicted here. In these iron layers, each Fe atom has two active electron "clouds," or orbitals—dxz (red) and dyz (blue)—each containing one electron. By directly visualizing the electron states in the iron planes of FeSe, the researchers revealed that that electrons in the dxz orbitals (red) do not form Cooper pairs or contribute to the superconductivity, but instead form an incoherent metallic state along the horizontal (x) axis. In contrast, all electrons in the dyz orbitals (blue) form strong Cooper pairs with neighboring atoms to generate superconductivity. Searching for other materials with this exotic "orbital-selective" pairing may lead to the discovery of new superconductors.

UPTON, NY—A team of scientists has found evidence for a new type of electron pairing that may broaden the search for new high-temperature superconductors. The findings, described in the journal Science, provide the basis for a unifying description of how radically different “parent” materials—insulating copper-based compounds and metallic iron-based compounds—can develop the ability to carry electrical current with no resistance at strikingly high temperatures.

According to the scientists, the materials’ dissimilar electronic characteristics actually hold the key to commonality.

“Scientists have thought that because the starting point for superconductivity in these two classes of materials is so different, you need different theoretical approaches to describe them,” said J.C. Séamus Davis, a physicist at the U.S. Department of Energy’s (DOE) Brookhaven National Laboratory and Cornell University, who led the team of experimental scientists. “Instead, we’ve been motivated to explore what is universal about these two systems. Ideally, there should be just one explanation.”

Séamus Davis, a physicist at Cornell University and the U.S. Department of Energy's Brookhaven National Laboratory

Scientists have generally understood that the mechanism of superconductivity in copper oxide compounds depends on the ability of electrons on adjacent copper atoms to pair up. Each copper atom has a single, unpaired electron in its outermost energy shell, or orbital. While the outermost electrons on adjacent copper atoms interact with one another strongly, they ordinarily stay locked in place, stuck in a “quantum mechanical traffic jam” with nowhere to go, Davis said. With no electrons moving, the material acts as a “strongly correlated” electrical insulator.

Removing some of the electrons that reside on copper atoms results in electron vacancies known as holes. This alleviates the quantum traffic jam so that, when the material is cooled to a certain temperature, oppositely aligned electrons (magnetic partners where the “spin” of one electron points up and the adjacent one points down) form pairs and then become free to zip through the material unimpeded—a superconductor.

The custom-built Spectroscopic Imaging Scanning Tunneling Microscope used for these experiments stands one meter high, with cryogenic circuitry at the top for cooling samples to temperatures just above absolute zero (nearly -273 degrees Celsius). Inside, a needle with single atom on the end scans across the crystal surface in steps as small as 2 trillionths of a meter, measuring the electron tunneling current at each location. These measurements reveal the quantum wavefunctions of electrons in the material with exquisite precision.

Iron atoms, which have a nucleus with smaller positive charge than copper, exert less pull on the circulating electrons. So instead of filling up electron orbitals, electrons in several outer energy orbitals remain unpaired, yet aligned with one another and electronically active. The alignment of unpaired electrons in multiple orbitals gives simple iron its strong magnetic and metal properties, so it’s easy to see why iron compounds would be good conductors. But it’s not really clear how they could become zero-resistance superconductors at high temperatures without the strong interactions that create a correlated insulating state in the copper based materials.

“The challenge is to find a way to see that some of the electrons are superconducting and some are insulating in the same crystal,” Davis said.

The theory team for this project—Andreas Kreisel (University of Leipzig), Peter Hirschfeld (University of Florida), and Brian Anderson (University of Copenhagen)—defined the electronic signatures that should be associated with each orbital on the iron atoms. Then, experimentalists Peter Sprau and Andrey Kostin (both of Brookhaven Lab and Cornell) used a scanning tunneling microscope at the Center for Emergent Superconductivity—a DOE Energy Frontier Research Center at Brookhaven Lab—to measure the energy and momentum of electrons in iron-selenide samples that were synthesized by Anna Bohmer and Paul Canfield at DOE’s Ames Laboratory. Comparing the measurements with the predicted electronic signatures allowed the scientists to identify which electrons were associated with each orbital.

With this information, “We can measure the binding energy and momentum of electrons in the ‘Cooper pairs’ responsible for superconductivity and identify which energy momentum characteristics they have—which orbital they’re from,” Davis said.

“We were able to show that almost all of the electrons in Cooper pairs in iron selenide were from a particular lower energy orbital (the dyz orbital),” Davis said. The findings also imply that the electron in iron’s outermost orbital in iron selenide exhibits virtually insulating properties, just as it does in the copper oxide compounds.

“Because iron selenide normally exhibits good metallic conductivity, how would one ever know that the electrons in this orbital are acting as they are in correlated insulators? This strongly interacting and virtually insulating state was hiding in plain sight!” he said.

With this outer-orbital insulating state, the iron compound has all the same requirements for superconductivity that the copper oxides do—a strong magnetic interaction (up/down pairing) of the almost localized electrons, and a metallic state that allows those pairs to move. The big difference is that in iron selenide, these contributions come from different electrons in three separate active orbitals, instead of the single electron in one active orbital in copper. 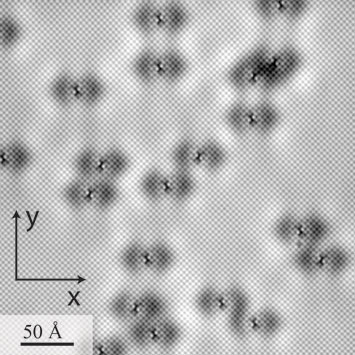 This image produced by the Spectroscopic Imaging Scanning Tunneling Microscope reveals the location of every atom on the surface, as well as every single atomic defect in the field of view. The white dots making up squares arrayed 45-degrees to the x/y-axis are selenium (Se) atoms, while the defects—missing Fe atoms in the Fe plane, about a quarter of a nanometer below the Se surface—show up as butterfly-shaped perturbations produced by quantum interference of electrons scattering from the defects. These scattering interference patterns led to the discovery of orbital selective Cooper pairing in FeSe.

“In iron you have the conductivity for free. And you have the magnetism for free, but it’s based on a different electron. Both coexist in the same atom,” Davis said. So once you have Cooper pairs, it seems there’s no need to add holes to get the current flowing.

This realization may broaden the search for new superconductors that can potentially operate under warmer conditions. Such higher high-temperature superconductors would be more practical for real world, energy-saving applications such as power lines or energy storage devices.

“Instead of searching for new single-electron antiferromagnetic insulators like copper oxide to make high-temperature superconductors, maybe we should be searching for new highly magnetic, metallic materials that have properties like iron but in an orbitally selective arrangement,” Davis said. “This opens the world of materials science to many new types of materials that could be high-temperature superconductors.”

This research was funded by the DOE Office of Science, the Moore Foundation’s EPiQS Initiative, and a Lundbeckfond Fellowship.