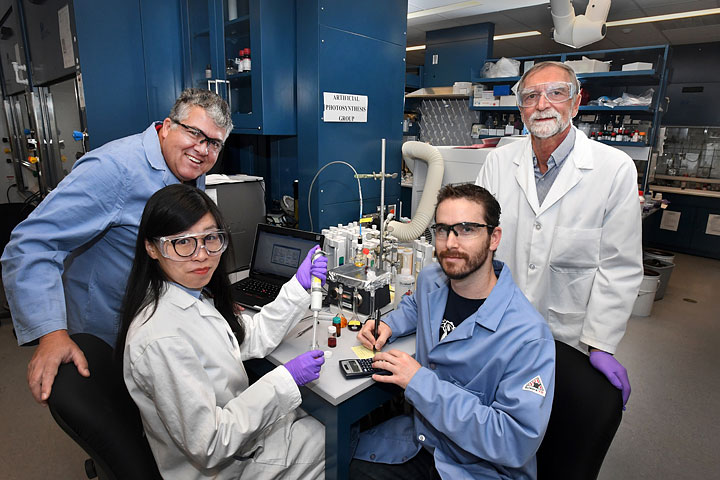 UPTON, NY—Chemists at the U.S. Department of Energy’s Brookhaven National Laboratory have designed a new catalyst that speeds up the rate of a key step in “artificial photosynthesis”—an effort to mimic how plants, algae, and some bacteria harness sunlight to convert water and carbon dioxide into energy-rich fuels. This step—called water oxidation—releases protons and electrons from water molecules, producing oxygen as a byproduct.

This “single-site” catalyst—meaning the entire reaction sequence takes place on a single catalytic site of one molecule—is the first to match the efficiency of the catalytic sites that drive this reaction in nature. The single-site design and high efficiency greatly improve the potential for making efficient solar-to-fuel conversion devices.

The more efficient the water oxidation cycle is, the more energy we can store.

“The end goal is to break out those molecular building blocks—the protons and electrons—to make fuels such as hydrogen,” said David Shaffer, a Brookhaven research associate and lead author on a paper describing the work in the Journal of the American Chemical Society. “The more efficient the water oxidation cycle is, the more energy we can store.”

“Water is very stable,” said Brookhaven chemist Javier Concepcion, who led the research team. “Water can undergo many boiling/condensing cycles and it stays as H2O. To get the protons and electrons out, we need to make the water molecules react with each other.”

The catalyst acts as a chemical handler, shuffling around the water molecules’ assets—electrons, hydrogen ions (protons), and oxygen atoms—to get the reaction to happen.

Bubbles indicate the rapid production of oxygen (O2) when the catalyst is added to the solution. For each O2 molecule produced, four protons (H+) and four electrons are released—enough to make two hydrogen (H2) molecules.

The new catalyst design builds on one the group developed last year, led by graduate student Yan Xie, which was also a single-site catalyst, with all the components needed for the reaction on a single molecule. This approach is attractive because the scientists can optimize how the various parts are arranged so that reacting molecules come together in just the right way. Such catalysts don’t depend on the free diffusion of molecules in a solution to achieve reactions, so they tend to continue functioning even when fixed to a surface, as they would be in real-world devices.

“We used computer modeling to study the reactions at the theoretical level to help us design our molecules,” Concepcion said. “From the calculations we have an idea of what will work or not, which saves time before we get into the lab.”

In both Xie’s design and the new improvement, there’s a metal at the core of the molecule, surrounded by other components the scientists can choose to give the catalyst particular properties. The reaction starts by oxidizing the metal, which pulls electrons away from the oxygen on a water molecule. That leaves behind a “positively charged,” or “activated,” oxygen and two positively charged hydrogens (protons). 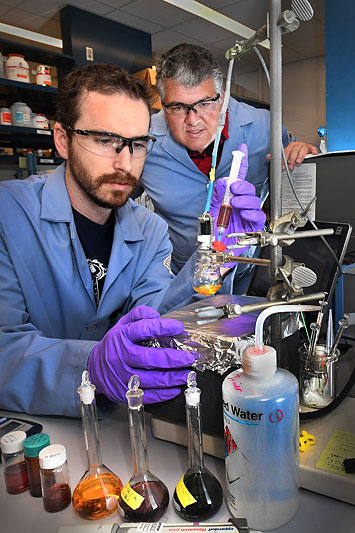 David Shaffer injects the catalyst into the reaction solution as Javier Concepcion looks on.

“Taking electrons away makes the protons easier to release. But you need those protons to go somewhere. And it’s more efficient if you remove the electrons and protons at the same time to prevent the build-up of excess charges,” Concepcion said. “So Xie added phosphonate groups as ligands on the metal to act as a base that would accept those protons,” he explained. Those phosphonate groups also made it easier to oxidize the metal to remove the electrons in the first place.

But there was still a problem. In order to activate the H2O molecule, you first need it to bind to the metal atom at the center of the catalyst.

In the first design, the phosphonate groups were so strongly bound to the metal that they were preventing the water molecule from binding to the catalyst early enough to keep the process running smoothly. That slowed the catalytic cycle down.

So the team made a substitution. They kept one phosphonate group to act as the base, but swapped out the other for a less-tightly-bound carboxylate.

“The carboxylate group can more easily adjust its coordination to the metal center to allow the water molecule to come in and react at an earlier stage,” Shaffer said.

“When we are trying to design better catalysts, we first try to figure out what is the slowest step. Then we redesign the catalyst to make that step faster,” he said. “Yan’s work made one step faster, and that made one of the other steps end up being the slowest step. So in the current work we accelerated that second step while keeping the first one fast.”

The improvement transformed a catalyst that created two or three oxygen molecules per second to one that produces more than 100 per second—with a corresponding increase in the production of protons and electrons that can be used to create hydrogen fuel. 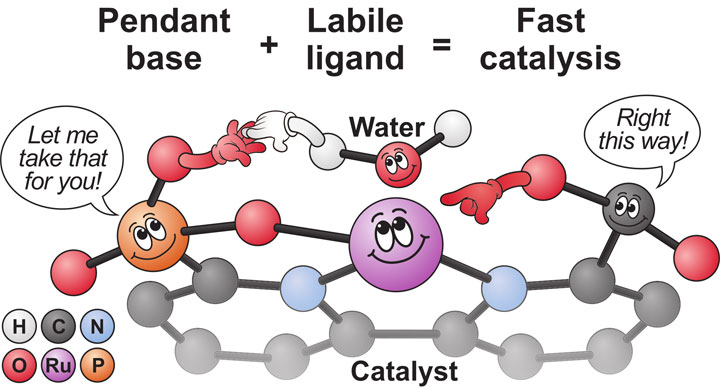 The new catalyst has a ruthenium (Ru) atom at its core, a "pendant" phosphonate group to act as a base that accepts protons (H+) from water, and a more flexible, or "labile," carboxylate group that facilitates the interaction of the catalyst with water.

“That’s a rate that is comparable to the rate of this reaction in natural photosynthesis, per catalytic site,” Concepcion said. “The natural photosynthesis catalyst has four metal centers and ours only has one,” he explained. “But the natural system is very complex with thousands and thousands of atoms. It would be extremely hard to replicate something like that in the lab. This is a single molecule and it does the same function as that very complex system.”

The next step is to test the new catalyst in devices incorporating electrodes and other components for converting the protons and electrons to hydrogen fuel—and then later, with light-absorbing compounds to provide energy to drive the whole reaction.

“We have now systems that are working quite well, so we are very hopeful,” Concepcion said.