UPTON, NY—Theoretical physicists at the U.S. Department of Energy’s (DOE’s) Brookhaven National Laboratory and their collaborators have just released the most precise prediction of how subatomic particles called muons—heavy cousins of electrons—“wobble” off their path in a powerful magnetic field. The calculations take into account how muons interact with all other known particles through three of nature’s four fundamental forces (the strong nuclear force, the weak nuclear force, and electromagnetism) while reducing the greatest source of uncertainty in the prediction. The results, published in Physical Review Letters as an Editors' Suggestion, come just in time for the start of a new experiment measuring the wobble now underway at DOE’s Fermi National Accelerator Laboratory (Fermilab).

A version of this experiment, known as “Muon g-2,” ran at Brookhaven Lab in the late 1990s and early 2000s, producing a series of results indicating a discrepancy between the measurement and the prediction. Though not quite significant enough to declare a discovery, those results hinted that new, yet-to-be discovered particles might be affecting the muons’ behavior. The new experiment at Fermilab, combined with the higher-precision calculations, will provide a more stringent test of the Standard Model, the reigning theory of particle physics. If the discrepancy between experiment and theory still stands, it could point to the existence of new particles.

“If there’s another particle that pops into existence and interacts with the muon before it interacts with the magnetic field, that could explain the difference between the experimental measurement and our theoretical prediction,” said Christoph Lehner, one of the Brookhaven Lab theorists who led the latest calculations. “That could be a particle we’ve never seen before, one not included in the Standard Model.” 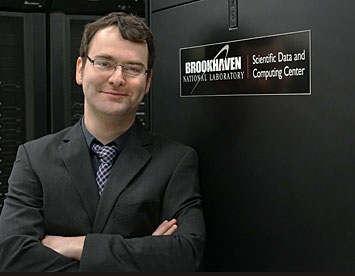 Christoph Lehner, a theoretical physicist at Brookhaven Lab, with computational resources that were essential to refining the predicted value of muon g-2.

Finding new particles beyond those already cataloged by the Standard Model has long been a quest for particle physicists. Spotting signs of a new particle affecting the behavior of muons could guide the design of experiments to search for direct evidence of such particles, said Taku Izubuchi, another leader of Brookhaven’s theoretical physics team.

“It would be a strong hint and would give us some information about what this unknown particle might be—something about what the new physics is, how this particle affects the muon, and what to look for,” Izubuchi said.

The Muon g-2 experiment measures what happens as muons circulate through a 50-foot-diameter electromagnet storage ring. The muons, which have intrinsic magnetism and spin (sort of like spinning toy tops), start off with their spins aligned with their direction of motion. But as the particles go ’round and ’round the magnet racetrack, they interact with the storage ring’s magnetic field and also with a zoo of virtual particles that pop in and out of existence within the vacuum. This all happens in accordance with the rules of the Standard Model, which describes all the known particles and their interactions, so the mathematical calculations based on that theory can precisely predict how the muons’ alignment should precess, or “wobble” away from their spin-aligned path. Sensors surrounding the magnet measure the precession with extreme precision so the physicists can test whether the theory-generated prediction is correct.

Both the experiments measuring this quantity and the theoretical predictions have become more and more precise, tracing a journey across the country with input from many famous physicists.

A race and collaboration for precision

“There is a race of sorts between experiment and theory,” Lehner said. “Getting a more precise experimental measurement allows you to test more and more details of the theory. And then you also need to control the theory calculation at higher and higher levels to match the precision of the experiment.”

With lingering hints of a new discovery from the Brookhaven experiment—but also the possibility that the discrepancy would disappear with higher precision measurements—physicists pushed for the opportunity to continue the search using a higher-intensity muon beam at Fermilab. In the summer of 2013, the two labs teamed up to transport Brookhaven’s storage ring via an epic land-and-sea journey from Long Island to Illinois. After tuning up the magnet and making a slew of other adjustments, the team at Fermilab recently started taking new data. 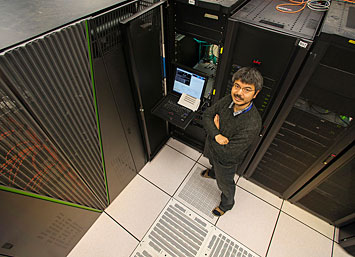 Taku Izubuchi, a leader of Brookhaven Lab's theoretical physics team, notes that many physicists have spent a huge part of their lives on efforts to solve the muon g-2 theory calculations.

Meanwhile, the theorists have been refining their calculations to match the precision of the new experiment.

“There have been many heroic physicists who have spent a huge part of their lives on this problem,” Izubuchi said. “What we are measuring is a tiny deviation from the expected behavior of these particles—like measuring a half a millimeter deviation in the flight distance between New York and Los Angeles! But everything about the fate of the laws of physics depends on that difference. So, it sounds small, but it’s really important. You have to understand everything to explain this deviation,” he said.

The path to reduced uncertainty

By “everything” he means how all the known particles of the Standard Model affect muons via nature’s four fundamental forces—gravity, electromagnetism, the strong nuclear force, and the electroweak force. Fortunately, the electroweak contributions are well understood, and gravity is thought to play a currently negligible role in the muon’s wobble. So the latest effort—led by the Brookhaven team with contributions from the RBC Collaboration (made up of physicists from the RIKEN BNL Research Center, Brookhaven Lab, and Columbia University) and the UKQCD collaboration—focuses specifically on the combined effects of the strong force (described by a theory called quantum chromodynamics, or QCD) and electromagnetism.

“This has been the least understood part of the theory, and therefore the greatest source of uncertainty in the overall prediction. Our paper is the most successful attempt to reduce those uncertainties, the last piece at the so-called ‘precision frontier’—the one that improves the overall theory calculation,” Lehner said.

"Our paper is … the last piece at the so-called 'precision frontier'—the one that improves the overall theory calculation."

The mathematical calculations are extremely complex—from laying out all the possible particle interactions and understanding their individual contributions to calculating their combined effects. To tackle the challenge, the physicists used a method known as Lattice QCD, originally developed at Brookhaven Lab, and powerful supercomputers. The largest was the Leadership Computing Facility at Argonne National Laboratory, a DOE Office of Science user facility, while smaller supercomputers hosted by Brookhaven’s Computational Sciences Initiative (CSI)—including one machine purchased with funds from RIKEN, CSI, and Lehner’s DOE Early Career Research Award funding—were also essential to the final result.

“One of the reasons for our increased precision was our new methodology, which combined the most precise data from supercomputer simulations with related experimental measurements,” Lehner noted. 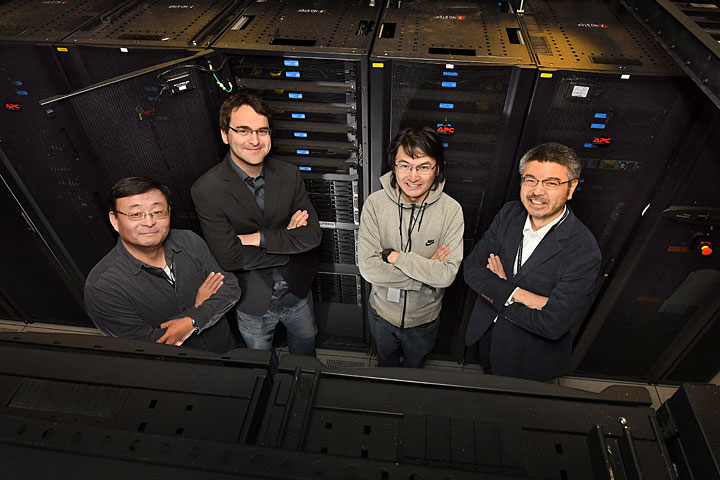 Other groups have also been working on this problem, he said, and the entire community of about 100 theoretical physicists will be discussing all of the results in a series of workshops over the next several months to come to agreement on the value they will use to compare with the Fermilab measurements.

“We’re really looking forward to Fermilab’s results,” Izubuchi said, echoing the anticipation of all the physicists who have come before him in this quest to understand the secrets of the universe.

The theoretical work at Brookhaven was funded by the DOE Office of Science, RIKEN, and Lehner’s Early Career Research Award.