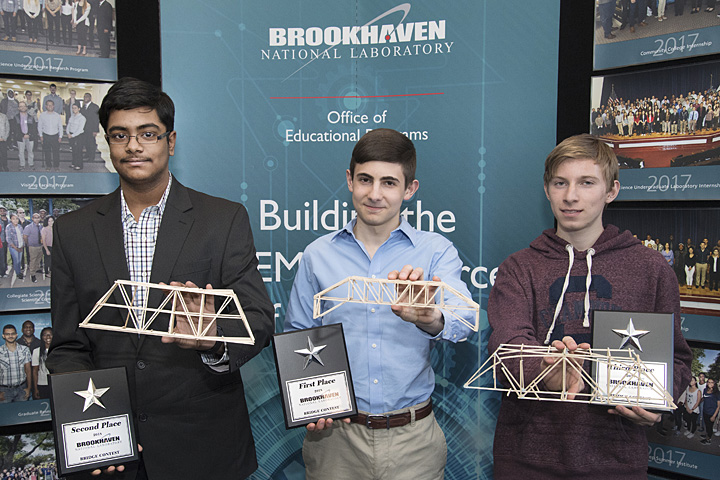 Students from 16 Nassau and Suffolk County high schools designed and constructed a total of 87 model bridges intended to be simplified versions of real-world bridges. In this contest, efficiency is calculated from the bridge’s weight and the weight the bridge can hold before breaking or bending more than one inch. The higher the efficiency, the better the design and construction.

Justin Wallace from Walt Whitman High School took the top spot, building a bridge that weighed 14.62 grams with an efficiency of 2117. Wallace had placed second in the Lab's 2017 competition.

Hasnain Sayed from Bay Shore High School placed second with a bridge that weighed 23.38 grams with an efficiency of 1316. The construction and testing of model bridges promotes the study and application of principles of physics and engineering, and helps students develop "hands on" skills. Students get a flavor of what it is like to be engineers, designing structures to a set of specifications and then seeing the bridges they build perform their function.

Gillian Winters, a science teacher from Smithtown High School East, conducted a bridge competition in her classroom to help students prepare for the contest at Brookhaven. She also built a bridge of her own to compete among students.

“My students built two bridges—one that we could smash in the classroom and one for the Lab competition,” said Winters. “I’m getting better, but I’m thrilled when the students beat my bridge!”

First place winner Justin Wallace said he built a few bridges before deciding which one to enter in the Lab contest.

“I did some online research on bridge design to gain a better understanding of the concepts and specifications,” said Wallace. “As you can imagine, I’m very happy my research paid off!”

Wallace will graduate from Walt Whitman High School this year and plans to pursue a career in mechanical engineering.