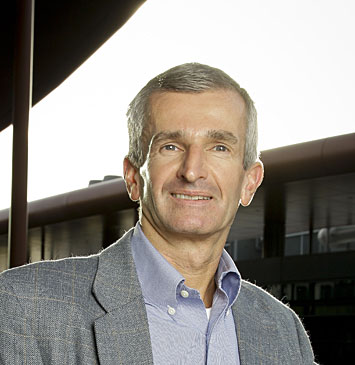 UPTON, NEW YORK—Axel Brunger, a professor at Stanford University and an investigator for the Howard Hughes Medical Institute, will present a BSA Distinguished Lecture at the U.S. Department of Energy's Brookhaven National Laboratory on Thursday, April 26. Brunger's talk, titled "Molecular Mechanisms of Neurotransmitter Release," will be held at 4 p.m. in Berkner Hall.

The messages running through your body's nervous system are important enough to save your life—and keep you breathing. Some of those messages help you spring into action, for example, jamming your foot on the brake pedal to avoid a car accident. Others help regulate things beyond conscious control, like your heartbeat and breathing while you sleep. But, just how do those messages travel from your brain to where they need to arrive, and how do they do it so quickly?

Scientists already know your central nervous system, comprising your brain and spinal cord, relies on electrical signals that travel through specialized nerve cells called neurons. These neurons communicate by releasing packages of neurotransmitters through gaps, or "synaptic junctions," between cells. This requires a process called membrane fusion, which is important in many areas of biology, but in the central nervous system, it occurs much faster than elsewhere in the body—less than a millisecond.

Brunger’s lab team is working to decipher the molecular mechanisms of neurotransmitters as they are released. During Brunger’s lecture at Brookhaven, he will discuss recent structural and biophysical studies.

Brunger earned a Ph.D. in biophysics at the Technical Institute of Munich in Germany in 1982. After his time as a postdoctoral fellow in Harvard University's Chemistry Department and a fellow at the Max Planck Institute for Biochemistry, he returned to Harvard as a research associate from 1985 to 1987. He then joined the faculty at Yale University and Howard Hughes Medical Institute, and, in 2000, left Yale to join Stanford University's Department of Molecular and Cellular Physiology. He served as chair of that department from 2013 to 2017. Today Brunger remains at Stanford as a professor of molecular and cellular physiology and at Howard Hughes as an investigator.

Brunger received a number of awards and prizes over the years, and has authored or coauthored more than 280 publications. He is a member of the National Academy of Sciences.

This lecture is scheduled to be webcast live and archived on WBNL (https://www.bnl.gov/video/).