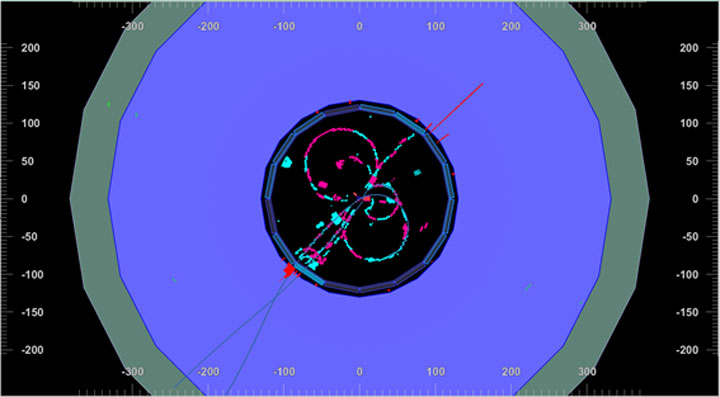 A hadronic event in the Belle II detector. Heavier particles produced by the electron-positron collision decay to lighter particles.

Electrons and positrons accelerated and stored by the SuperKEKB particle accelerator collided for the first time on 26 April 2018 0:38, GMT+09:00 at KEK in Tsukuba, Japan. The Belle II detector, installed at the collision point, recorded events from electron-positron annihilation (matter-antimatter annihilation) of the beam particles, which produced other particles likely including beauty quark and anti-beauty quark pairs as well as other hadronic and Bhabha scattering events1. These are the first electron-positron collisions at the KEK particle physics laboratory in 8 years; the previous KEKB particle collider ceased its operations in 2010.

The Belle II detector at SuperKEKB was designed and built by an international collaboration of over 750 researchers from 25 countries and regions. Compared to Belle, the detector for the previous experiment, Belle II has dramatically improved capabilities and can detect and reconstruct events at much higher rates provided by the 40 times higher luminosity2 of SuperKEKB. A dataset of about 50 billion B anti-B meson pair production events, which is 50 times larger than the entire data sample of the KEKB/Belle project, will be accumulated in about 10 years of operation.

SuperKEKB, along with the Belle II detector, is a facility designed to search for New Physics beyond the Standard Model by measuring rare decays of elementary particles such as beauty quarks, charm quarks, and tau leptons. Belle II will tackle the problem of finding evidence of the existence of new particles, a new possible reason why matter is dominant compared with antimatter and answer other open fundamental questions in understanding the universe. 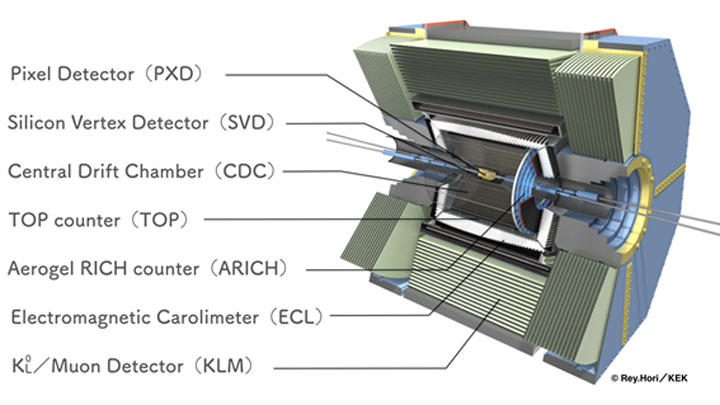 Last month, KEK began a new stage of operation of the SuperKEKB electron-positron collider, with a brand new positron damping ring, a new extremely complex system of superconducting final focusing magnets, and the Belle II detector in place at the interaction point. A beam of electrons was successfully stored for the first time in the main high energy ring on March 21st. A beam of positrons was also successfully stored in the main low energy ring on March 31st. Since then, final accelerator tuning of the two beams for collisions at the center of Belle II has continued for several weeks.

In contrast to the LHC at CERN in Geneva, Switzerland, which is the world’s highest energy proton accelerator, SuperKEKB/Belle II is designed to have the world’s highest luminosity. SuperKEKB is the leading accelerator on the “luminosity frontier”. Background information on the science goals of the SuperKEKB/Belle II facility is available on the Belle II public web page: belle2.jp

Comments from Project Members and the KEK Directorate

“It is my great pleasure to announce the first collisions in the SuperKEKB accelerator and to celebrate the start of the Belle II Experiment after more than 7 years of major improvements. I am looking forward to seeing how the results from the Belle II Experiment help humankind understand the nature of the universe. We are grateful to everyone who has supported the project so far. Though there will be further difficulties that we must face before the SuperKEKB accelerator achieves its design luminosity, 40 times higher than KEKB’s world record, KEK will strive towards success in research together with many collaborators from all over the world.”

“After more than seven years of construction and preparation by many dedicated and talented researchers, engineers and students, the Belle II experiment has finally started. This is a truly gratifying moment for all of us in the international collaboration. We now look forward to launching the physics program of the first electron-positron super B Factory. The world is waiting for our results.”

“Detecting the first collisions is a great accomplishment of the teams involved in the beam commissioning process over the last months. The deep experience of the Japanese accelerator physicists has brought this far in a very short time and gave us confidence to gradually power up the Belle II detector without any significant risk to the experiment. Now it’s over to the detector physicists to make the best out of the discovery potential this superb machine is giving us; we are ready to accept the challenge.”

“We have been working hard to upgrade the data acquisition system, consisting of thousands of electronics boards and computers, to handle a maximum trigger rate of 30 kilo-Hertz. Our centralized control system, which supervises all the electronics systems such as power supplies for sub-detectors, trigger timing distributions, readout electronics inside the detector and the high level trigger computing farm has been developed, commissioned and is now fully operational and ready to record the first collision data. We are happy to start data taking on time with beam collisions.”