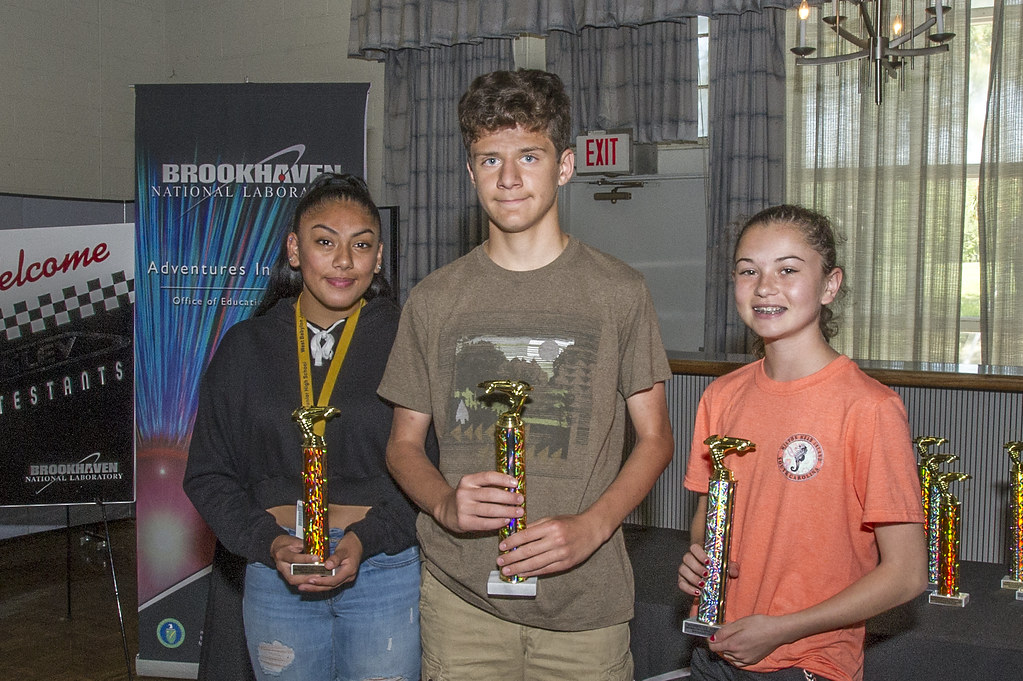 John Mollica, a technology teacher at Bay Shore Middle School, said he was happy to bring home just one trophy. “This is the first year we have entered the Maglev contest, so taking home a trophy was a big accomplishment,” said Mollica. “Coming to the Lab let us interact with other students and teachers to see what methods they used to build their maglev vehicles. As a teacher, it’s more about motivating our students and teaching them about the spirit of competition while broadening their horizons. Now that we have had this experience, we’re hoping to return next year with improved maglev vehicles to race on the tracks.”

The contest is based on research by two Brookhaven engineers, the late Gordon Danby and James Powell, who invented and patented maglev technology — the suspension, guidance, and propulsion of vehicles by magnetic forces. Magnetic properties give the maglev trains their extraordinary capabilities for speed and stability. These same principles — using magnetic forces to move matter — are used in world-class research facilities at Brookhaven Lab, including the Relativistic Heavy Ion Collider (RHIC) and the National Synchrotron Light Source II (NSLS-II) — which are both DOE Office of Science user facilities. Magnetic properties allow the machines to move particles at nearly the speed of light for research purposes.

Words like gravity, slow, fast, and balance could be heard with enthusiasm around the room as students tested and ran their vehicles at the various maglev track stations hoping their time would earn them a top spot in the competition.

Nearly 200 students from Long Island middle schools entered the contest, in which they were required to design and construct model maglev vehicles according to engineering specifications in a choice of seven categories: electrified track, futuristic, wind power, gravity, self-propelled balloon, self-propelled-other, and scale-model design. Judging was based on speed, efficiency, appearance, and the students' written design process.