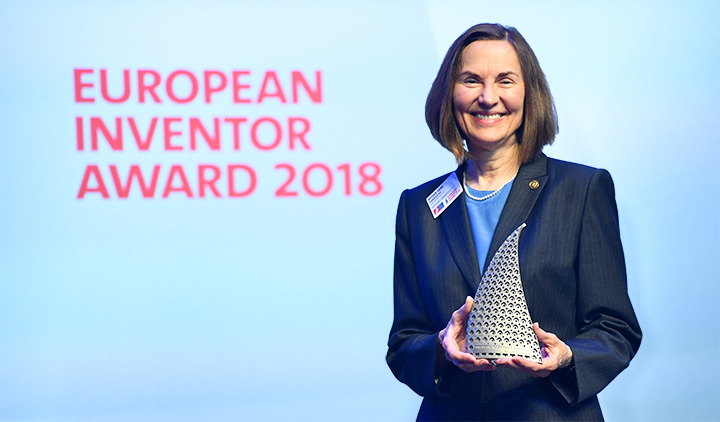 UPTON, NY & PARIS –Esther Sans Takeuchi, PhD, has won the 2018 European Inventor Award in the "Non-EPO countries", the European Patent Office (EPO) announced today. The award was given to her by the EPO at a ceremony held today in Paris, Saint-Germain-en-Laye. Of the four U.S. scientists nominated for the award, Takeuchi is the only American to bring home Europe’s most prestigious prize of innovation.

Takeuchi is the Chief Scientist of the Energy Sciences Directorate at the U.S. Department of Energy’s Brookhaven National Laboratory, Stony Brook University’s (SBU) William and Jane Knapp Endowed Chair in Energy and the Environment, and a Distinguished Professor of Chemistry in the College of Arts & Sciences and in Materials Science and Chemical Engineering in the College of Engineering and Applied Sciences at SBU. She was honored for developing the compact batteries that power tiny, implantable cardiac defibrillators (ICDs)—devices that detect and correct irregular, potentially fatal, heart rhythms. Her lithium silver vanadium oxide ("Li/SVO") battery extended the power-source lifetime for ICDs to around five years, considerably longer than its predecessors, thus reducing the number of surgeries patients needed to undergo to replace them. Her invention led not only to an advance in battery chemistry, but also enabled the production and widespread adoption of ICDs and significantly improved patient well-being.

"Esther Sans Takeuchi's innovative work on energy storage and power sources is enabling lifesaving technologies that benefit millions of heart patients," said EPO President Benoît Battistelli. "Her developments in the field of battery technology have also made her one of the most prolific U.S. women inventors. She serves as an exceptional role model for women in science today, while demonstrating the immense advances in human well-being that science and technology can bring about."

Esther Sans Takeuchi is one of four women inventors being honored with the 2018 European Inventor Award, the highest number ever since the Award was launched in 2006.

“On behalf of Stony Brook University and Brookhaven National Laboratory, I am thrilled that Esther Takeuchi was selected for this award,” said Samuel L. Stanley Jr., President of Stony Brook University and Board Chair of Brookhaven Science Associates, which manages Brookhaven National Laboratory on behalf of the U.S. Department of Energy. "Esther's work is the epitome of innovation, as demonstrated in this breakthrough translational research for which she was recognized by the European Patent Office. She continues to follow the science toward the next big, revolutionary idea for energy storage, while mentoring others to follow in her footsteps as she executes on multiple grants from the Department of Energy and philanthropic foundations. Her star keeps getting brighter, and I’m proud that she is part of the Stony Brook University family.”

The award ceremony, held at the Théâtre Alexandre Dumas, was attended by some 600 guests from the areas of politics, business, intellectual property, and science. The award is presented annually by the EPO to distinguish outstanding inventors from Europe and around the world who have made an exceptional contribution to social development, technological progress and economic growth. The winners were chosen by an independent international jury from a nomination list of more than 500 individuals and teams of inventors put forward for this year's award.

When the first ICD was implanted in 1980, the relatively bulky device—placed in the patient's abdominal region due to its size—required battery replacement every 12 to 18 months. The resulting frequent surgeries presented an additional risk for patients who were already suffering from heart problems. As a materials scientist and chemical engineer, Esther Sans Takeuchi focused her expertise on developing a better solution:

Using synchrotron x-rays has been a life-changing experience in terms of research, because now, we can watch the batteries as they are working.

"We took on the almost impossible challenge of developing a battery that would last five years, and have one million times higher power than the pacemaker battery," said Takeuchi. “We achieved this through several innovations: a new cathode material, a highly conductive electrolyte, and a novel cell design that enabled high power.”

As a result of her work, ICD batteries now offer significantly greater longevity and are small enough to be fitted underneath a patient's collarbone in the same location that pacemakers are placed. Takeuchi's Li/SVO batteries are now the most commonly used batteries in implantable cardiac defibrillators. With about 300,000 of these devices implanted each year worldwide, they are quite literally life-savers—using a high-voltage shock to reset the heart and prevent sudden death in high-risk patients who are susceptible to cardiac arrest.

The battery technology was first employed in an implanted ICD in 1987 and commercialized by U.S. medical device manufacturer Greatbatch, where Takeuchi headed research and development for batteries. Speaking about the development of the technology, the inventor added, “We were very clever in how we approached patents; we realized that patents could be a strategic advantage for the company.”

The daughter of Latvian emigrants, Esther Sans Takeuchi credits her parents for instilling in her a strong work ethic from a young age and for awakening her interest in science. Today, she is recognized as one of the world’s leading energy-storage researchers and also one of the most successful U.S. woman inventors, with over 150 U.S. patents and 39 European patents to her name. Since 2012, she is the SUNY Distinguished Professor in the Materials Science and Engineering department at Stony Brook University, as well as the Chief Scientist of the Energy Sciences Directorate at Brookhaven National Laboratory in New York. After 40 years in industry and academia, she continues to work at the forefront of battery technology innovation:

“Batteries seem to be simple, but in reality they are very complex,” the inventor says. “The mechanisms are still not fully understood, and so research continues.”

Among the tools Takeuchi uses to advance battery research is the National Synchrotron Light Source II, a DOE Office of Science user facility at Brookhaven National Laboratory. She notes how synchrotrons have revolutionized battery research:

“In the 1980s, when we were studying batteries, we had to cut the batteries open, take out the parts, and do the analysis. Using synchrotron x-rays has been a life-changing experience in terms of research, because now, we can watch the batteries as they are working.”

Stony Brook University is going beyond the expectations of what today’s public universities can accomplish. Since its founding in 1957, this young university has grown to become a flagship as one of only four University Center campuses in the State University of New York (SUNY) system with more than 26,000 students and 2,600 faculty members, and 18 NCAA Division I athletic programs. Our faculty have earned numerous prestigious awards, including the Nobel Prize, Pulitzer Prize, Indianapolis Prize for animal conservation, Abel Prize and the inaugural Breakthrough Prize in Mathematics. The University offers students an elite education with an outstanding return on investment: U.S. News & World Report ranks Stony Brook among the top 50 public universities in the nation. Its membership in the Association of American Universities (AAU) places Stony Brook among the top 62 research institutions in North America. As part of the management team of Brookhaven National Laboratory, the University joins a prestigious group of universities that have a role in running federal R&D labs. Stony Brook University is a driving force in the region’s economy, generating nearly 60,000 jobs and an annual economic impact of more than $4.6 billion. Our state, country and world demand ambitious ideas, imaginative solutions and exceptional leadership to forge a better future for all. The students, alumni, researchers and faculty of Stony Brook University are prepared to meet this challenge.