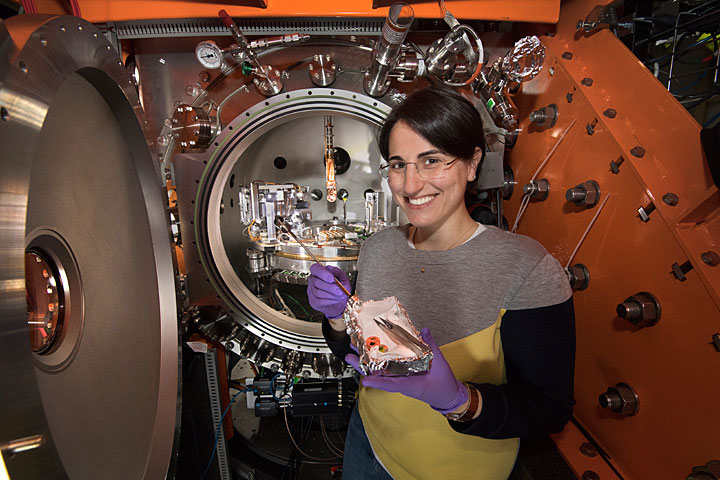 Valentina Bisogni, an associate physicist at the U.S. Department of Energy’s (DOE) Brookhaven National Laboratory, has been selected by DOE’s Office of Science to receive significant research funding as part of DOE’s Early Career Research Program.

The effort, now in its ninth year, is designed to bolster the nation’s scientific workforce by providing support to exceptional researchers during the crucial early career years, when many scientists do their most formative work. Bisogni is among a total of 84 recipients selected this year after a competitive review of proposals. Thirty winners come from DOE national laboratories and 54 from U.S. universities.

“Supporting talented researchers early in their career is key to building and maintaining a skilled and effective scientific workforce for the nation. By investing in the next generation of scientific researchers, we are supporting lifelong discovery science to fuel the nation’s innovation system,” said Secretary of Energy Rick Perry. “We are proud of the accomplishments these young scientists have already made, and look forward to following their achievements in years to come.”

Each researcher will receive a grant of up to $2.5 million over five years to cover their salary and research expenses. A list of the 84 awardees, their institutions, and titles of their research projects is available on DOE’s Early Career Research Program webpage.

Many technological advancements to electronics have stemmed from scientists’ ability to control the motion of charges in semiconductors, and to manufacture semiconductor-based devices on smaller scales. However, as semiconductor technology is starting to reach its physical limits for storage density and speed, scientists are searching for new kinds of materials to build the next generation of energy-efficient electronics. Bisogni and her colleagues are focused on quantum materials and manipulating their collective spin excitations. Collective spin excitations in quantum materials permit the transfer of information without requiring any movement of charge, thus eliminating the major challenge of semiconductors—heat dissipation.

To conduct her research and study the microscopic mechanisms of collective spin excitations, Bisogni will use the Soft Inelastic X-ray Scattering (SIX) beamline at the National Synchrotron Light Source II (NSLS-II)—a DOE Office of Science User Facility at Brookhaven Lab. NSLS-II is one of the world’s most advanced synchrotron light sources, and SIX is the only instrument capable of providing the energy resolution needed for Bisogni’s research.

Bisogni will also lead the development of a new and unique sample environment, called Opera, that replicates the working conditions of electrical devices. Combining SIX’s ultra-high energy resolution with Opera will enable Bisogni to optimize the energy efficiency of quantum materials by studying the behavior of electrical devices in response to currents, electric fields, magnetic fields, temperature changes, and strain—in unprecedented detail.

“I am very excited and honored to receive the Early Career Award funding from DOE. This is a great and unique opportunity for a scientist,” Bisogni said. “I am extremely motivated to realize this project and I am looking forward to achieving unique results on the spin dynamics of model devices leaning towards novel, energy-efficient electronics.”

Bisogni received her undergraduate and master’s degrees in physics engineering from the Polytechnic University of Milan in 2004 and 2006, respectively. She earned her Ph.D. in Physics jointly from the Polytechnic University of Milan and the European Synchrotron Radiation Facility in 2010. Bisogni worked as a postdoctoral fellow at the Leibniz Institute for Solid State and Materials Research in Dresden from 2010 to 2012, and as a postdoctoral fellow at the Swiss Light Source from 2012 to 2014. She joined Brookhaven Lab in 2014 as a beamline scientist for SIX at NSLS-II, and was promoted from assistant physicist to associate physicist in 2016. Bisogni is an expert in soft x-ray resonant inelastic x-ray scattering, and has contributed to the understanding of quantum materials’ electronic structure using soft x-ray scattering and spectroscopy techniques.