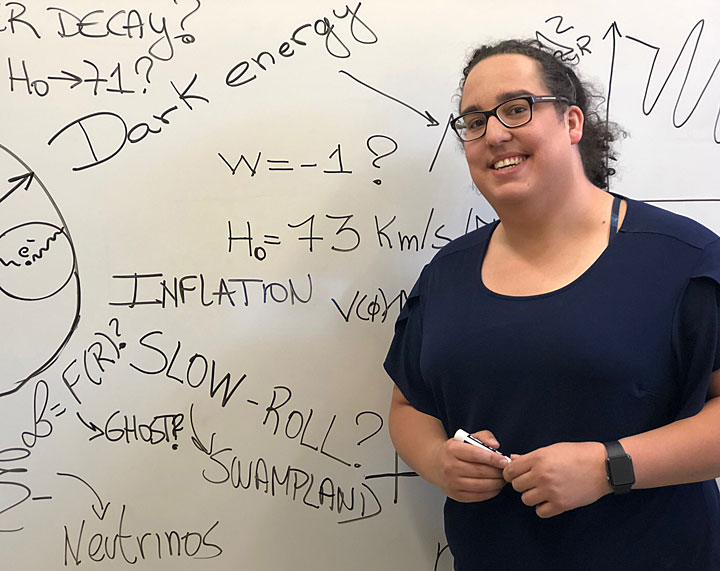 UPTON, NY—Vivian Miranda, a postdoctoral research associate at the University of Arizona and member of the Dark Energy Survey collaboration, has been named a recipient of the Leona Woods Distinguished Postdoctoral Lectureship Award. The award was established by the Physics Department at the U.S. Department of Energy’s Brookhaven National Laboratory in honor of renowned physicist Leona Woods to celebrate the scientific accomplishments of outstanding female physicists and physicists from other under-represented minority groups, including the LGBTQ community—and to promote diversity and inclusion in the department. Miranda will receive an honorarium of $1,000 and the opportunity to give a general-interest colloquium and a technical talk about her work during a weeklong stay at Brookhaven Lab.

“This award means the world to me,” said Miranda, who was born and raised in Brazil. “Being a scientist who lives far from family and friends is rewarding but challenging. In addition, being a transgender woman in a field that is still learning about what that entails can be terrifying. This award has helped me to believe that I work in an open culture of acceptance that will embrace my talent. It gives me the energy to continue cracking the standard model of our universe, and become a model for the transgender community, both in the USA and in my home country.”

Miranda’s research uses observations about the structure and distribution of matter in the universe to look for cracks in our current understanding of the cosmos as described by the standard model—the theory that encompasses all the known particles and their interactions.

“We learn, from our mundane experience, to predict the behavior of our universe by applying the laws of nature, and it is one of the most challenging and rewarding endeavors in human history,” she said. “The standard model is an excellent model, with groundbreaking predictions that have been corroborated by numerous experiments. But there are a lot of open questions about the role of 95 percent of the energy content of our current cosmos—made of so-called dark matter and dark energy. So looking for cracks in our current understanding is an active field of research, and there are both observational and theoretical difficulties in this quest.”

One of the biggest challenges, she notes, is that many of the predictions depend on estimating the distance between astronomical objects, as well as calibrating how much mass there is in the universe, and how it is distributed in clumps and voids. The Dark Energy Survey uses light emitted from collapsed stars, called supernovae, and the way gravity distorts light emitted from distant galaxies to measure these quantities.

Miranda’s talks at Brookhaven Lab will describe the observational and theoretical challenges inherent in this work. She will also touch on connections between the Dark Energy Survey and new measurements that will be enabled by the Large Synoptic Survey Telescope (LSST), currently under construction using components designed and built at Brookhaven Lab. “I cannot emphasize enough how revolutionary LSST will be,” she said.

These talks are open to the public. All visitors to the Lab age 16 and older must show a valid photo ID.