Cube-shaped nanoparticles with thick shells of DNA assemble into a never-before-seen 3-D "zigzag" pattern that breaks orientational symmetry; understanding such nanoscale behavior is key to engineering new materials with desired organizations and properties 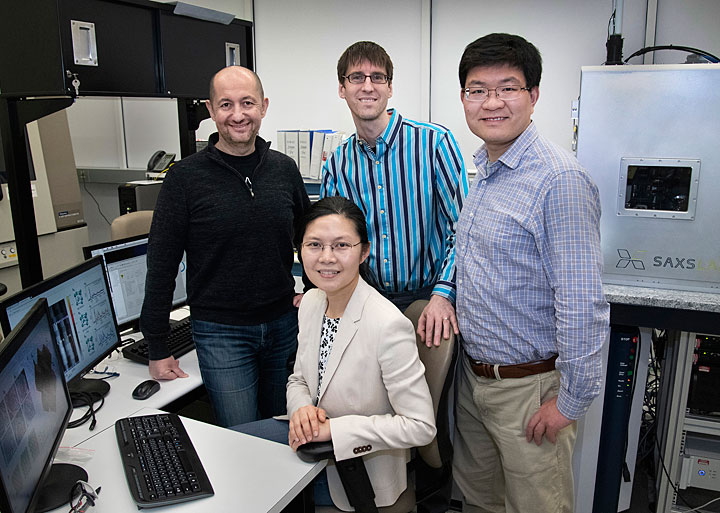 UPTON, NY—From the ancient pyramids to modern buildings, various three-dimensional (3-D) structures have been formed by packing shaped objects together. At the macroscale, the shape of objects is fixed and thus dictates how they can be arranged. For example, bricks attached by mortar retain their elongated rectangular shape. But at the nanoscale, the shape of objects can be modified to some extent when they are coated with organic molecules, such as polymers, surfactants (surface-active agents), and DNA. These molecules essentially create a “soft” shell around otherwise “hard,” or rigid, nano-objects. When the nano-objects pack together, their original shape may not be entirely preserved because the shell is flexible—a kind of nanoscale sculpturing.

Now, a team of scientists from the U.S. Department of Energy’s (DOE) Brookhaven National Laboratory and Columbia Engineering has shown that cube-shaped nanoparticles, or nanocubes, coated with single-stranded DNA chains assemble into an unusual “zigzag” arrangement that has never been observed before at the nanoscale or macroscale. Their discovery is reported in the May 17 online issue of Science Advances.

“Nanoscale objects almost always have some kind of shell because we intentionally attach polymers to them during synthesis to prevent aggregation,” explained co-author Oleg Gang, leader of the Soft and Bio Nanomaterials Group at the Center for Functional Nanomaterials (CFN)—a DOE Office of Science User Facility at Brookhaven Lab—and professor of chemical engineering and applied physics and materials science at Columbia University. “In this study, we explored how changing the softness and thickness of DNA shells (i.e., the length of the DNA chains) affects the packing of gold nanocubes.”

Gang and the other team members—Fang Lu and Kevin Yager of CFN; Yugang Zhang of the National Synchrotron Light Source II (NSLS-II), another DOE Office of Science User Facility at Brookhaven; and Sanat Kumar, Thi Vo, and Alex Frenkel of Columbia’s Department of Chemical Engineering—discovered that nanocubes surrounded by thin DNA shells pack in a similar way to that expected on the macroscale, with the cubes arranged in neat layers oriented directly above one another. But this simple cubic arrangement gives way to a very unusual type of packing when the thickness of the shells is increased (i.e., when the shell becomes “softer”).

“Each nanocube has six faces where it can connect to other cubes,” explained Gang. “Cubes that have complementary DNA are attracted to one another, but cubes that have the same DNA repel each another. When the DNA shell becomes sufficiently soft (thick), the cubes arrange into what looks like a zigzag pattern, which maximizes attraction and minimizes repulsion while remaining packed as tightly as possible.

“This kind of packing has never been seen before, and it breaks the orientational symmetry of cubes relative to the vectors (directions of the x, y, and z axes in the crystal) of the unit cell,” said first author Fang Lu, a scientist in Gang’s group. “Unlike all previously observed packings of cubes, the angle between cubes and these three axes is not the same: two angles are different from the other one.”

A unit cell is the smallest repeating part of a crystal lattice, which is an array of points in 3-D space where the nanoparticles are positioned. Shaped nanoparticles can be oriented differently relative to each other within the unit cell, such as the by their faces, edges, or corners. The zigzag packing that the scientists observed in this study is a kind of nanoscale compromise in which neither relative orientation “wins.” Instead, the cubes find the best arrangement to co-exist in an ordered lattice based on whether they have the same or complementary DNA (i.e., repelling or attracting each other accordingly).

In this case, two different lattice types can occur: body-centered cubic (BCC) and body-centered tetragonal (BCT). Both BCC and BCT have similar placements of particles in the center and corners of the cubes, but BCC has unit cell sides of equal length while BCT does not.

To visualize the shape of the cubes and their packing behavior, the scientists used a combination of electron microscopy at the CFN and small-angle x-ray scattering (SAXS) at the former X9 beamline of NSLS and the Complex Materials Scattering beamline of NSLS-II. The electron microscopy studies require that the materials are taken out of solution, but SAXS can be conducted in situ to provide more detailed and precise structural information. In this study, the scattering data were helpful in revealing the symmetries, distances between particles, and orientations of particles in the 3-D nanocube structures. Theoretical calculations performed by the Kumar Group at Columbia confirmed that the zigzag arrangement is possible and rationalized why this kind of packing was happening based on the properties of the DNA shells.

The team is now eager to determine whether soft-shelled nano-objects that are not cubes or have more than one shape also pack together in unexpected ways.

“An understanding of the interplay between shaped nano-objects and soft shells will enable us to direct the organization of objects into particular structures with desired optical, mechanical, and other properties,” said Kumar.