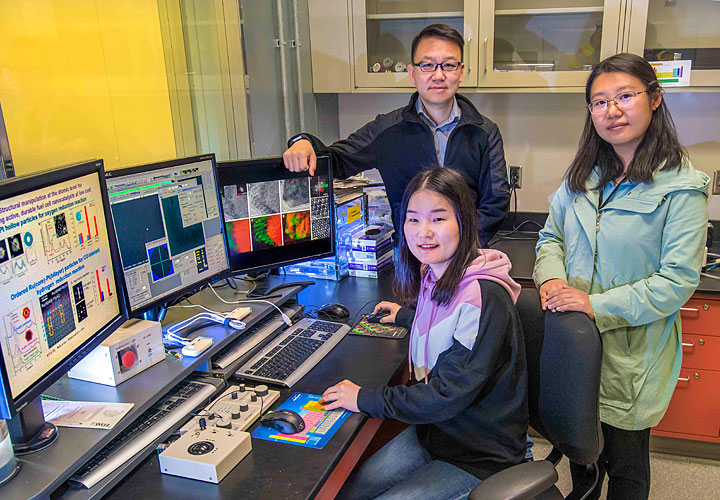 Sooyeon Hwang (sitting), Dong Su (left, standing, and Shuang Li at Brookhaven Lab's Center for Functional Nanomaterials, where they used electron microscopes to see how the crystal structure and chemical nature of a battery electrode made of an iron-oxide material called magnetite evolved as lithium was inserted and extracted over 100 charge and discharge cycles.

UPTON, NY—Because of their high energy-storage density, materials such as metal oxides, sulfides, and fluorides are promising electrode materials for lithium-ion batteries in electric vehicles and other technologies. However, their capacity fades very rapidly. Now, scientists studying an electrode made of an inexpensive and nontoxic iron-oxide material called magnetite have proposed a scenario—described in the May 20 online issue of Nature Communications—that explains why.

“Magnetite, among other conversion-type electrode materials (i.e., materials that get converted into entirely new products when they react with lithium), can store more energy than today’s electrode materials because they can accommodate more lithium ions,” said study lead Dong Su, leader of the Electron Microscopy Group at the Center for Functional Nanomaterials (CFN)—a U.S. Department of Energy (DOE) Office of Science User Facility at Brookhaven National Laboratory. “However, the capacity of these materials degrades very quickly and is dependent on the current density. For example, our electrochemical testing of magnetite revealed that its capacity drops very quickly within the first 10 high-rate charge and discharge cycles.”

A video showing the changes in morphology of precycled iron oxide during lithium insertion inside an electron microscope.

To find out what is behind this poor cycling stability, the scientists characterized how the crystal structure and chemical nature of magnetite evolved as the battery completed 100 cycles. For these characterization studies, they combined transmission electron microscopy (TEM) at the CFN and synchrotron x-ray absorption spectroscopy (XAS) at the Advanced Photon Source (APS)—a DOE Office of Science User Facility at Argonne National Lab. In TEM, an electron beam is transmitted through a sample to produce an image or a diffraction pattern characteristic of the material’s structure; XAS uses an x-ray beam instead to probe the chemistry of the material.

Using these techniques, the scientists discovered that magnetite completely decomposes into metallic iron nanoparticles and lithium oxide during the first discharge. In the following charge, this conversion reaction is not completely reversible—residues of metallic iron and lithium oxide remain. Moreover, the original “spinel” structure of magnetite evolves into a “rock-salt” structure (the location of iron atoms is not entirely identical in the two structures) at the charged state. With subsequent charge and discharge cycles, rock-salt iron oxide interacts with lithium to form a composite of lithium oxide and metallic iron nanoparticles. Because the conversion reaction is not fully reversible, these residual products accumulate. The scientists also found that the electrolyte (the chemical medium that enables lithium ions to flow between the two electrodes) decomposes in later cycles. 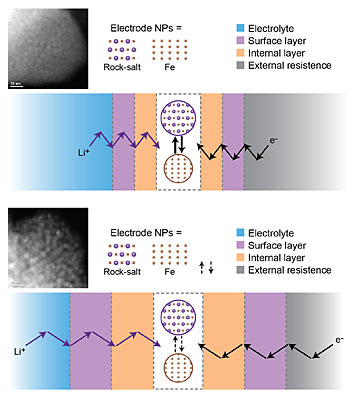 The fade in battery capacity is due to the formation and thickening of internal and surface passivation layers during charge and discharge cycles. For the electrochemical reactions to occur, lithium ions (Li+) and electrons (e-) must travel through all these layers to reach active nanoparticles (NPs) at the electrode. Top: Fe3O4 (iron oxide) sample after three cycles. Bottom: Fe3O4 sample after 100 cycles. The development of kinetic barriers during long-term cycling limits electrochemical reactions to such an extent that no reduction-oxidation reactions occur at the electrode materials after 100 cycles.

“Our real-time TEM studies in ultrahigh vacuum enabled us to see how the structure of rock-salt iron oxide changes as lithium is introduced after the initial cycles,” said Su. “This study uniquely represents the in situ lithiation of a precycled sample. Previous in situ studies only looked at the initial charge and discharge cycles. However, we need to know what happens over many cycles to design longer-lasting batteries because the structure at the charged electrode is different from that of the pristine state.”

On the basis of their results, the scientists proposed an explanation for the capacity fade.

“Because lithium oxide has a low electronic conductivity, its accumulation creates a barrier to the electrons that are shuttling back and forth between the battery’s positive and negative electrode,” explained co-leading author Sooyeon Hwang, a staff scientist in the CFN Electron Microscopy Group. “We call this barrier an internal passivation layer. Similarly, electrolytic decomposition hinders ionic conduction by forming a surface passivation layer. This buildup of obstacles blocks electrons and lithium ions from reaching active electrode materials, where the electrochemical reactions occur.”

The scientists noted that operating the battery at a low current can recover some of this capacity by slowing the charge rate to provide enough time for electron transport; however, other solutions are needed to ultimately fix the problem. They believe that adding other elements to the electrode material and changing the electrolyte could improve capacity fading.

“The knowledge we gained can generally be applied to other conversion compounds, which also face the same problem with internal and external passivation layers,” said co-corresponding author Zhongwei Chen, a professor at the University of Waterloo, Canada. “We hope this study can help guide future fundamental research on these promising conversion-type electrode materials.”