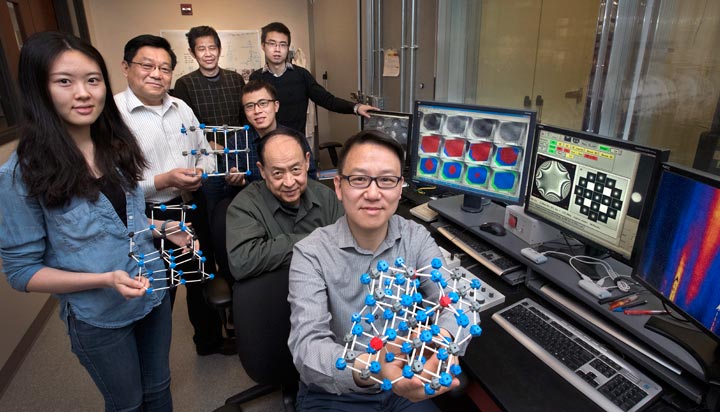 UPTON, NY—From cell phones to laptops and tablets, lithium-ion batteries power most of today's portable electronics. Understanding how these batteries store and release energy as they charge and discharge is critical to improving their performance and increasing their longevity, especially for high-power applications such as electric vehicles and smart power grids. Visualizing the atomic-scale reaction pathways involved in battery discharge, however, has been difficult because of the high sensitivity required to detect the corresponding local structural changes in battery materials just billionths of a meter in size.

Now, a team of scientists from the U.S. Department of Energy's (DOE) Brookhaven National Laboratory, the University of Pennsylvania, and the University of Maryland, College Park, has developed an electron microscopy technique to visualize—in real time and at high resolution—such pathways. The scientists used this advanced technique, described in a Nature Communications paper published on May 9, to observe the discharge of a lithium-ion battery cell containing nanoparticles of magnetite—an inexpensive, nontoxic, high-conducting, high-energy-storage material. These discharge mechanisms were then correlated with the battery's discharge rates. The team's findings about how lithium migrates at the nanoscale could help improve the electrochemical performance of comparable electrode materials in lithium-ion batteries.

"Understanding how lithium ions penetrate and move in magnetite nanoparticles may help us to rationally design new nanoelectrodes for high-performance lithium-ion batteries," said Dong Su, a scientist in Brookhaven Lab's Center for Functional Nanomaterials (CFN), a DOE Office of Science User Facility, who led this research.

Imaging the lithiation of magnetite nanoparticles

Video capturing the coexistence of three distinct phases within a single magnetite nanoparticle.

To visualize how the structure of magnetite evolves during the discharge, or lithiation, process, the scientists used strain-sensitive, bright-field scanning transmission electron microscopy. In this technique, a "bright field" detector at the bottom of the microscope collects electrons transmitted through a sample, producing a contrast image in which regions with no sample in the electron beam path appear bright while thicker regions of the sample appear dark. The contrast of this image is sensitive to the strain, or the microforces, that produce very small local structural changes in a sample. In this case, the scientists inserted lithium ions into individual magnetite nanoparticles, observing how each nanoparticle's structure evolves throughout the phases of lithiation.

While the lithiation of magnetite and other metal oxides with similar structure is known to occur as a sequential two-step reaction of intercalation (insertion of lithium ions into compound) and conversion (decomposition of compound), the intercalation reaction had been impossible to visualize.

"During intercalation, the volume of the magnetite nanoparticle lattice volume changes only by a few percent because the inserted lithium ions simply fill empty spaces within the lattice. By comparison, conversion is much easier to see—there are no empty spaces to accommodate the lithium, so the lattice has no choice but to expand, actually breaking the electrode material in some cases," explained Su. "Our team is the first to capture the phase changes that occur in the nanoparticles during the intercalation reaction."

Determining the reaction pathways of lithiation 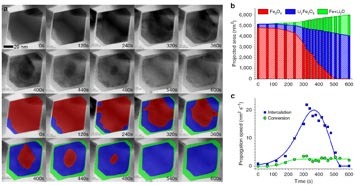 (a) Bright-field scanning transmission electron microscope image series, which shows the three phases of lithiation over a 600-second period. Below the black-and-white images in the top two rows are falsely colored images that enhance the visualization of the different phases: pure magnetite (red), lithiated magnetite (blue), and metallic iron–lithium oxide composite (green). (b) The projected areas of the three phases in a single nanoparticle as a function of time. (c) The speeds of the intercalation and conversion reactions as functions of time.

By analyzing the resulting microscope images, the scientists discovered that intercalation initially follows a two-phase "insertion and expansion" reaction sequence. Lithium ions first diffuse into the surface of the nanoparticle and then proceed inward. Under certain current conditions, further lithiation leads to the conversion reaction and the coexistence of three distinct phases within a single magnetite nanoparticle: pure magnetite (Fe3O4), lithiated rocksalt (LixFe3O4), and a composite of metallic iron (Fe) and lithium oxide (Li2O).

The team used an ex situ high-resolution transmission electron microscopy to track these atomic structural changes and to confirm they were not limited to a single nanoparticle but were characteristic of the entire battery cell. Patterns produced by the diffraction of X-rays on nanoparticle samples, an experiment conducted at the National Synchrotron Light Source II, a DOE Office of Science User Facility at Brookhaven Lab, verified the pure magnetite and lithiated rocksalt phases that occur during intercalation.

"This reaction inhomogeneity within a single particle means that intercalation and conversion are happening simultaneously in the middle course of the lithiation process," said Kai He, first author of this paper and former CFN postdoctoral researcher (now a research faculty member at Northwestern University). "The large lithium concentration at the particle surface could be triggering conversion early on while intercalation has not yet completed."

Given the laws of thermodynamics, the two reactions should occur at different voltages because of differences in their natural chemistry. The observed overlap between the two reactions suggests that the kinetic effect, or how charge or discharge currents impact the amount of energy that can be stored within a battery, plays an important role in lithiation.

At high discharge rates, for example, the intercalation reaction happens much faster than the conversion reaction. However, conversion accommodates more lithium ions because of the attachment sites made possible by the displacement of iron ions. So both reactions are important when considering the total lithium insertion capacity of a battery and, hence, its overall energy storage rate.

"The kinetic effect impacts the battery's performance. It is generally accepted that slowly charging a battery at a lower current maximizes energy capacity. But to optimize performance for high-power applications, we need to understand how phase evolution behaves with faster charge and discharge and figure out how to maximize these rates without sacrificing energy density," explained Christopher Murray, the Richard Perry University Professor of Chemistry and Materials Science and Engineering at the University of Pennsylvania, who is the co-corresponding author of the paper.

The team used computational modeling to describe the two-step reaction, calculating the discharge voltage at different lithium concentrations and simulating the lithiation process in magnetite nanoparticles. The simulation agreed with the real-time microscopy observation of mixed lithiation phases, with the voltage decreasing as conversion initiates.

In the future, the team hopes to develop a new method for simultaneously visualizing the phase evolution and measuring the corresponding electrochemical performance of electrode materials in real time.

"Our final goal is to find new electrode materials for lithium-ion batteries that can store higher amounts of charge and release energy more quickly than currently existing materials like graphite," said Sen Zhang, a NatureNet postdoctoral fellow on Murray's team. "By enabling us to understand the kinetic behavior of electrode materials at the nanoscale, our technique will help us reach this goal."