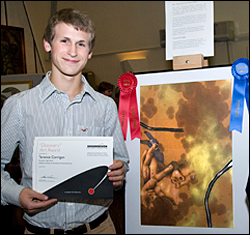 A 2009 “Discovery” prize is awarded to Terence Corrigan for his mysterious and compelling painting titled “Unzipped.” The artwork depicts elements of a portrait with two zippers incorporated into the space as part of the picture to symbolize the character waiting to be found by the onlooker who looks under the surface. This artwork is a perfect metaphor for the research done by scientists as they attempt to uncover the secrets of nature.

This year, two students were awarded the Discovery Prize: Terence Corrigan and Kayla Forman, both of Northport High School. At the BNL Art Society Art & Crafts show held in November in Berkner Hall, the winning artworks were accorded the place of honor. Robert Chrien of BNL’s Physics Department, president of the BNL Art Society, congratulated the winners and presented each with a certificate and a $500 savings bond.

Forman will continue to develop her gift for photography by studying art and will also focus on the liberal arts as her major in college. Corrigan, however, has decided teaching art will be his future career. He hopes to attend either Syracuse University or Penn State University. Both these talented students won additional prizes for their work from SBAA — Forman won a special award for her photo, and Corrigan was one of only three students awarded SBAA art scholarships. The scholarship winners were judged on three artworks of which one of Corrigan’s was his Discovery prizewinner. 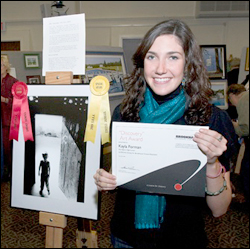 Kayla Forman receives a 2009 “Discovery” prize for her striking photograph of a boy at an open door leading him from a sunlit country scene to a dark, seemingly unknown interior — a strong metaphor for “discovery.” Forman took the photo in Nuevo Amanacer, Nicaragua, where members of a fundraising humanitarian club in her school travel twice yearly to provide aid. She will return there in February and see Jackson, the subject of her photo. “I can’t wait to tell him about the awards he has won!” she said.

Said Robert Chrien, president of the BNL Art Society and SBAA treasurer, “The excellent standard of the high school seniors’ artworks makes it very difficult to choose the winners, and the art teachers of all the participating students are to be congratulated. Special congratulations go this year to Terence’s teacher, Margaret Minardi, and Kayla’s teacher, Tara Pillich. Both our winners produced outstanding work that promises much for the future.”