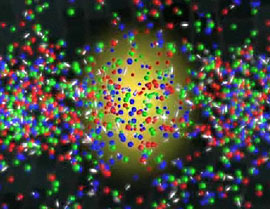 Recent analyses from the Relativistic Heavy Ion Collider (RHIC), a 2.4-mile-circumference “atom smasher” at the U.S. Department of Energy’s (DOE) Brookhaven National Laboratory, establish that collisions of gold ions traveling at nearly the speed of light have created matter at a temperature of about 4 trillion degrees Celsius — the hottest temperature ever reached in a laboratory, about 250,000 times hotter than the center of the Sun. This temperature, based upon measurements by the PHENIX collaboration at RHIC, is higher than the temperature needed to melt protons and neutrons into a plasma of quarks and gluons. Details of the findings will be published in Physical Review Letters.

'Bubbles' of Broken Symmetry in Quark Soup at RHIC

Data suggest symmetry may ‘melt’ along with protons and neutrons 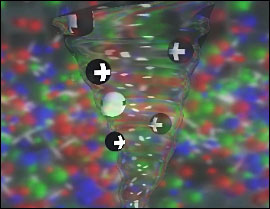 Scientists at the Relativistic Heavy Ion Collider (RHIC), a 2.4-mile-circumference particle accelerator at the U.S. Department of Energy’s Brookhaven National Laboratory, report the first hints of profound symmetry transformations in the hot soup of quarks, antiquarks, and gluons produced in RHIC’s most energetic collisions. In particular, the new results, reported in the journal Physical Review Letters, suggest that “bubbles” formed within this hot soup may internally disobey the so-called “mirror symmetry” that normally characterizes the interactions of quarks and gluons.