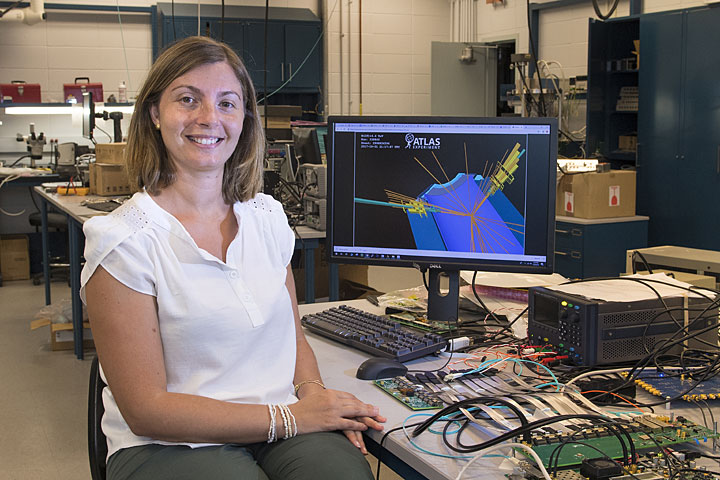 UPTON, NEW YORK — Viviana Cavaliere, a physicist at the U.S. Department of Energy's (DOE) Brookhaven National Laboratory, will receive significant funding to advance the hunt for "new physics," DOE's Office of Science announced. Cavaliere is among 73 researchers nationwide recognized through the Office of Science's prestigious Early Career Research Program. This funding will aid Cavaliere as she explores possible holes or inconsistencies in physicists' Standard Model theory that describes all known fundamental particles in the universe and explains how they interact.

“Supporting our nation’s most talented and creative researchers in their early career years is crucial to building America’s scientific workforce and sustaining America’s culture of innovation,” said Secretary of Energy Rick Perry. “We congratulate these young researchers on their significant accomplishments to date and look forward to their achievements in the years ahead.”

Now in its 10th year, the Early Career Research Program supports up-and-coming scientists to develop research programs in disciplines the Office of Science supports. Typical awards for staff at DOE national laboratories, such as Cavaliere at Brookhaven, provide $500,000 per year for five years. Scientific experts used a peer-review process to evaluate proposals from a large pool of applicants at universities and other national laboratories.

"What is the universe made of? Why does the physical world work the way it does? The Standard Model theory has been very successful in helping answer questions like these, but it doesn't describe a number of phenomena we have observed," Cavaliere said. "There could be exciting new clues and a more fundamental theory hidden in the data we will explore. That's what makes this work so exciting and why I am so grateful to be awarded this support."

Precision measurements, the LHC, ATLAS, and the Higgs

Cavaliere is working on precision measurements to find hints of new phenomena using the ATLAS detector at the Large Hadron Collider (LHC) at CERN in Europe.

ATLAS is one of two major experiments scientists used to discover the long-sought Higgs boson in 2012. This discovery provided evidence that the Higgs gives mass to other elementary particles in the Standard Model. Its discovery contributed to the 2013 Nobel Prize in Physics, which was awarded to two theoretical physicists who predicted the Higgs' existence nearly fifty years earlier.

There could be exciting new clues and a more fundamental theory hidden in the data we will explore. That's what makes this work so exciting and why I am so grateful to be awarded this support.

Brookhaven Lab is host for the 45 U.S. institutions contributing to ATLAS. The Laboratory also provides a large portion of the overall computing resources for U.S. collaborators, serving as the central hub for storing, processing, and distributing ATLAS experimental data among scientists across the country. In total, ATLAS comprises about 3,000 scientists from more than 180 institutions around the world.

Cavaliere has been a member of the ATLAS collaboration since 2011. She and her colleagues are now in an era in which the Higgs can be used with other particles to look for new physics—particles and interactions not yet discovered. Protons that collide at the LHC produce a multitude of particles, including the Higgs and other bosons. After identifying the particles produced, the scientists "work back" step by step to determine what occurred during and after the primary collision.

Cavaliere is developing hardware and data analysis software for the ATLAS detector to perform precise measurements from collisions to determine the probability of processes occurring that involve boson pairs. The Standard Model predicts quantitatively what will occur, but these precision measurements may show deviations from the model, indicating the possibility of something new and unexpected at play.

Cavaliere's research program also includes developing sophisticated new algorithms to upgrade the real-time data selection process—the "trigger" that determines which collision data to capture—for a major LHC upgrade that should be completed in 2026. Cavaliere’s program will help address the challenge of distinguishing between rare and interesting proton collisions, ensuring more Higgs bosons are detected and recorded and providing more opportunities to observe a deviation from the Standard Model.

"The High-Luminosity LHC upgrade should produce at least 15 million Higgs each year. That's five times more than the 3 million produced in 2017," Cavaliere explained. "We have only microseconds for triggers to identify interesting events. From the 40 million collision events occurring each second, we can record tens of thousands. It is among those where we will search for something new."

A bit more about Cavaliere

Cavaliere's work is funded by the DOE Office of Science.