UPTON, NY—Scientists from the U.S. Department of Energy’s (DOE) Brookhaven National Laboratory have garnered two out of five “Distinguished Scientists Fellow” awards announced today by the DOE’s Office of Science. Theoretical physicist Sally Dawson, a world-leader in calculations aimed at describing the properties of the Higgs boson, and José Rodriguez, a renowned chemist exploring and developing catalysts for energy-related reactions, will each receive $1 million in funding over three years to pursue new research objectives within their respective fields.

Both of these projects serve our mission to deliver discovery science and transformative technology to power and secure the nation’s future.

The America COMPETES Act authorized the establishment of a Distinguished Scientist opportunity to develop, sustain, and promote scientific and academic excellence in Office of Science research through collaborations between institutions of higher education and national laboratories. This opportunity is awarded on a competitive basis. The 2019 Fellows, five particularly eminent and accomplished DOE National Laboratory scientists, are distinguished by their transformative impact across multiple fields, extensive evidence of recognized awards and honors, extensive scientific productivity and accomplishment, and exceptional mentoring and training of postdocs and students. 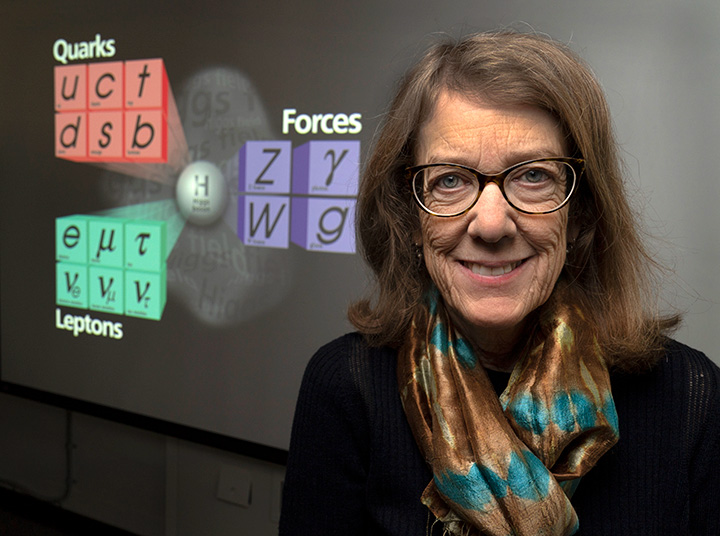 “For seminal contributions to the discovery of the Higgs particle through theoretical predictions, and a leadership role in thoroughly exploring the Higgs Boson and electroweak physics in research at particle accelerators.”

Dawson will lead a concentrated effort to compute properties of the Higgs boson—the “final” piece of physicists’ Standard Model—as well as the scattering properties of the gauge bosons that carry out interactions among the known particles described by that model.

The Higgs was discovered in 2012 at Europe’s Large Hadron Collider (LHC) and is believed to be responsible for imparting mass to the other known fundamental particles. But details of its mass-building mechanism, whether it may come in different varieties, how it (or they) might interact with yet-to-be-discovered particles remain subjects of intense interest as the LHC continues to collect data.

“Understanding LHC physics requires precision calculations to interpret experimental measurements,” Dawson said. “As LHC data becomes more precise, the target for theory calculations becomes similarly demanding and requires an approach using an effective field theory framework—a method that requires approximation and introduces many new challenges. This funding will help me initiate a ‘Higgs Theory Consortium’ by engaging partners at U.S. universities to perform these complex calculations, and more importantly, to implement them into the programs used to analyze data at the LHC’s ATLAS and CMS experiments so that new experimental results can be straightforwardly interpreted in terms of the theory.”

Dawson joined Brookhaven Lab’s Physics Department in 1986 after earning a B.S. in physics and mathematics from Duke University in 1977 and a Ph.D. in physics from Harvard University in 1981. She was a research associate at Fermi National Accelerator Laboratory from 1981 to 1983 and Lawrence Berkeley National Laboratory from 1983 to 1986. At Brookhaven, Dawson led the High Energy Theory Group from 1998 to 2004 and the Physics Department as chair from 2005 to 2007 before returning to research in 2008. She has also been an adjunct professor at Stony Brook University's Yang Institute for Theoretical Physics since 2001. Additional honors include being named a fellow of the American Physical Society in 1995 and the American Association for the Advancement of Science in 2006, a recipient of the prestigious Humboldt Research Award in 2015, and the J.J. Sakurai Prize in 2016. 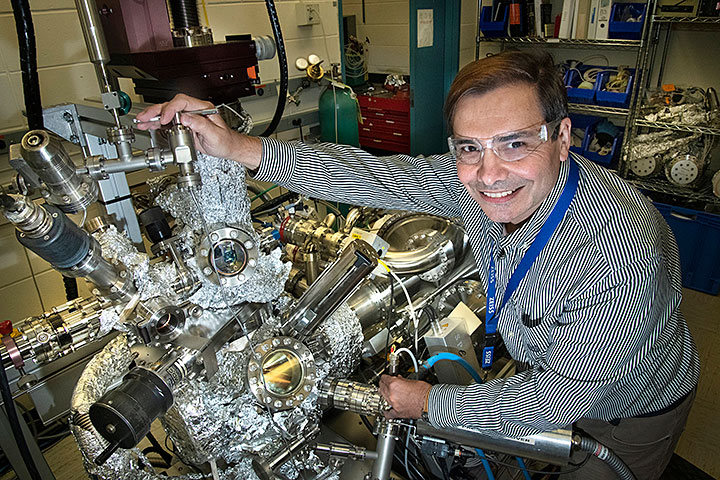 “For discoveries of the atomic basis of surface catalysis for the synthesis of sustainable fuels, and for significantly advancing in-situ methods of investigation using synchrotron light sources.”

Rodriguez will devote his funding to the development and construction of new tools for performing extremely rapid, time-resolved measurements to track the reaction mechanisms of catalytic processes as they occur under variable conditions—like those encountered during real-world reactions important to energy applications. These include processes on metal-oxide catalysts frequently used in the production of clean fuels and other “green” chemicals through hydrogenation of carbon monoxide and carbon dioxide, or the conversion of methane to hydrogen.

“At a microscopic level, the structure of a catalyst and the chemical environment around the active sites—where chemical bonds are broken and reformed as reactants transform into new products—change as a function of time, thus determining the reaction mechanism,” said Rodriguez. “We can learn a lot about the nature of the active sites under steady-state conditions, with no variations in temperature, pressure, and reaction rate. But to really understand the details of the reaction mechanism, we need ways to track what happens under transient or variable conditions. This funding will allow us to build new instrumentation that works with existing capabilities so we can study catalysts under variable conditions—and use what we learn to improve their performance.”

The tools will be installed in Chemistry Division laboratories and at beamlines at the National Synchrotron Light Source II (NSLS-II), a DOE Office of Science user facility that produces intense beams of x-rays for a wide range of studies. In catalysis, scientists use NSLS-II x-rays to create atomic-level images of how a catalyst’s structure evolves during a reaction. The new systems will add instrumentation that allows for transient experiments while varying temperature and gas pressures on the scale of milliseconds so scientists can study detailed changes within the catalyst’s active site as the reaction conditions change.

“These tools will allow us to correlate changes in surface reactivity with changes in the structural properties of the catalytic material over time,” Rodriguez said.

Rodriguez will develop the tools in collaboration with other scientists in Brookhaven’s Chemistry Division, at NSLS-II, the University of Kansas, and Stony Brook University. And the entire setup will be available for use by catalysis researchers from universities, industry, and other national laboratories, including through the Synchrotron Catalysis Consortium, which supports catalysis studies at NSLS-II.

Born and raised in Venezuela, Rodriguez earned his undergraduate degrees in chemistry and chemical engineering from the Simon Bolivar University in Caracas (1981, 1982), and a Ph.D. in physical chemistry from Indiana University (1988). After pursuing postdoctoral studies in chemistry at Texas A&M University, he joined Brookhaven as a research associate in 1991, rose through the ranks to become a senior chemist in 2002. He currently leads the Catalysis: Reactivity and Structure Group within the Chemistry Division and co-leads the Synchrotron Catalysis Consortium that operates at NSLS-II. He received Brookhaven Lab’s Science and Technology Award in 2011, and a 2007 Award for Technical Achievements from Great Minds in STEM™ — a non-profit organization, founded as HENAAC, which focuses on educational awareness and recognition programs for Hispanics in Science, Technology, Engineering and Mathematics (STEM). He is an adjunct professor of chemistry at Stony Brook University, has served as a mentor and collaborator for 16 undergraduate and graduate students, 24 postdoctoral fellows, and more than 50 visiting scientists from other national laboratories and universities.

“Both of these projects serve our mission to deliver discovery science and transformative technology to power and secure the nation’s future,” said Brookhaven National Laboratory Director Doon Gibbs. “They will build on existing collaborations and make DOE tools accessible to the wider research community, thereby broadening Brookhaven’s and the DOE’s impacts in advancing these intriguing and important research endeavors.” 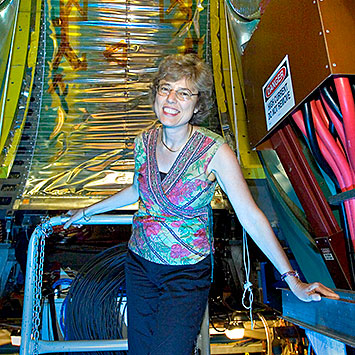 One of the three other honorees of the DOE Office of Science’s “Distinguished Scientists Fellow” awards program also has deep connections to Brookhaven National Laboratory. Former Stony Brook University professor Barbara Jacak, who now leads Lawrence Berkeley National Laboratory’s nuclear science division, is a former spokesperson for the PHENIX collaboration at Brookhaven’s Relativistic Heavy Ion Collider (RHIC), has helped to develop the strategy for the future sPHENIX experiment at RHIC, and is an active leader and advocate for an Electron Ion Collider (EIC). Jacak is being recognized “for leadership in discovering and characterizing the hottest, densest matter in the universe—the quark gluon plasma—and in building collaborations and training scientists at the frontiers of nuclear physics.” Read more about her work in this Berkeley Lab news story.