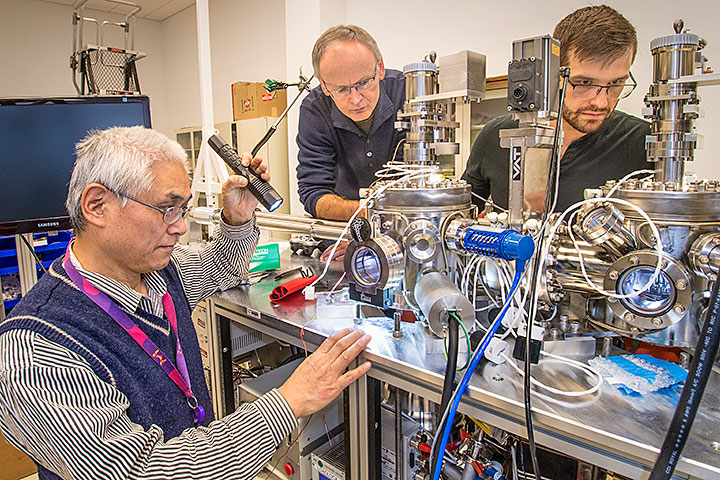 Brookhaven Lab physicists (from left to right) Genda Gu, Tonica Valla, and Ilya Drozdov at OASIS, a new on-site experimental machine for growing and characterizing oxide thin films, such as those of a class of high-temperature superconductors (HTS) known as the cuprates. Compared to conventional superconductors, HTS become able to conduct electricity without resistance at much warmer temperatures. The team used the unique capabilities at OASIS to make superconductivity in a cuprate sample disappear and then reappear in order to understand the origin of the phenomenon.

UPTON, NY—When there are several processes going on at once, establishing cause-and-effect relationships is difficult. This scenario holds true for a class of high-temperature superconductors known as the cuprates. Discovered nearly 35 years ago,  these copper-oxygen compounds can conduct electricity without resistance under certain conditions. They must be chemically modified (“doped”) with additional atoms that introduce electrons or holes (electron vacancies) into the copper-oxide layers and cooled to temperatures below 100 Kelvin (−280 degrees Fahrenheit)—significantly warmer temperatures than those needed for conventional superconductors. But exactly how electrons overcome their mutual repulsion and pair up to flow freely in these materials remains one of the biggest questions in condensed matter physics. High-temperature superconductivity (HTS) is among many phenomena occurring due to strong interactions between electrons, making it difficult to determine where it comes from.

That’s why physicists at the U.S. Department of Energy’s (DOE) Brookhaven National Laboratory studying a well-known cuprate containing layers made of bismuth oxide, strontium oxide, calcium, and copper oxide (BSCCO) decided to focus on the less complicated “overdoped” side, doping the material so much so that superconductivity eventually disappears. As they reported in a paper published on Jan. 29 in Nature Communications, this approach enabled them to identify that purely electronic interactions likely lead to HTS.

“Superconductivity in cuprates usually coexists with periodic arrangements of electric charge or spin and many other phenomena that can either compete with or aid superconductivity, complicating the picture,” explained first author Tonica Valla, a physicist in the Electron Spectroscopy Group of Brookhaven Lab’s Condensed Matter Physics and Materials Science Division. “But these phenomena weaken or completely vanish with overdoping, leaving nothing but superconductivity. Thus, this is the perfect region to study the origin of superconductivity. Our experiments have uncovered an interaction between electrons in BSCCO that correlates one to one with superconductivity. Superconductivity emerges exactly when this interaction first appears and becomes stronger as the interaction strengthens.”

Only very recently has it become possible to overdope cuprate samples beyond the point where superconductivity vanishes. Previously, a bulk crystal of the material would be annealed (heated) in high-pressure oxygen gas to increase the concentration of oxygen (the dopant material). The new method—which Valla and other Brookhaven scientists first demonstrated about a year ago at OASIS, a new on-site instrument for sample preparation and characterization—uses ozone instead of oxygen to anneal cleaved samples. Cleaving refers to breaking the crystal in vacuum to create perfectly flat and clean surfaces.

“The oxidation power of ozone, or its ability to accept electrons, is much stronger than that of molecular oxygen,” explained coauthor Ilya Drozdov, a physicist in the division’s Oxide Molecular Beam Epitaxy (OMBE) Group. “This means we can bring more oxygen into the crystal to create more holes in the copper-oxide planes, where superconductivity occurs. At OASIS, we can overdope surface layers of the material all the way to the nonsuperconducting region and study the resulting electronic excitations.”

OASIS combines an OMBE system for growing oxide thin films with angle-resolved photoemission spectroscopy (ARPES) and spectroscopic imaging–scanning tunneling microscopy (SI-STM) instruments for studying the electronic structure of these films. Here, materials can be grown and studied using the same connected ultrahigh vacuum system to avoid oxidation and contamination by carbon dioxide, water, and other molecules in the atmosphere. Because ARPES and SI-STM are extremely surface-sensitive techniques, pristine surfaces are critical to obtaining accurate measurements.

For this study, coauthor Genda Gu, a physicist in the division’s Neutron Scattering Group, grew bulk BSCCO crystals. Drozdov annealed the cleaved crystals in ozone in the OMBE chamber at OASIS to increase the doping until superconductivity was completely lost. The same sample was then annealed in vacuum in order to gradually reduce the doping and increase the transition temperature at which superconductivity emerges. Valla analyzed the electronic structure of BSCCO across this doping-temperature phase diagram through ARPES.

“ARPES gives you the most direct picture of the electronic structure of any material,” said Valla. “Light excites electrons from a sample, and by measuring their energy and the angle at which they escape, you can recreate the energy and momentum of the electrons while they were still in the crystal.”

In measuring this energy-versus-momentum relationship, Valla detected a kink (anomaly) in the electronic structure that follows the superconducting transition temperature. The kink becomes more pronounced and shifts to higher energies as this temperature increases and superconductivity gets stronger, but disappears outside of the superconducting state. On the basis of this information, he knew that the interaction creating the electron pairs required for superconductivity could not be electron-phonon coupling, as theorized for conventional superconductors. Under this theory, phonons, or vibrations of atoms in the crystal lattice, serve as an attractive force for otherwise repulsive electrons through the exchange of momentum and energy.

“Our result allowed us to rule out electron-phonon coupling because atoms in the lattice can vibrate and electrons can interact with those vibrations, regardless of whether the material is superconducting or not,” said Valla. “If phonons were involved, we would expect to see the kink in both the superconducting and normal state, and the kink would not be changing with doping.”

Moreover, the scientists found that the energy of the kink is less than that of a characteristic energy at which a sharp peak (resonance) in the spin fluctuation spectrum appears. Their finding suggests that the onset of spin fluctuations (instead of the resonance peak) is responsible for the observed kink and may be the “glue” that binds electrons into the pairs required for HTS.

Next, the team plans to collect additional evidence showing that spin fluctuations are related to superconductivity by obtaining SI-STM measurements. They will also perform similar experiments on another well-known cuprate, lanthanum strontium copper oxide (LSCO).

“For the first time, we are seeing something that strongly correlates with superconductivity,” said Valla. “After all these years, we now have a better grasp of what may be causing superconductivity in not only BSCCO but also other cuprates.”