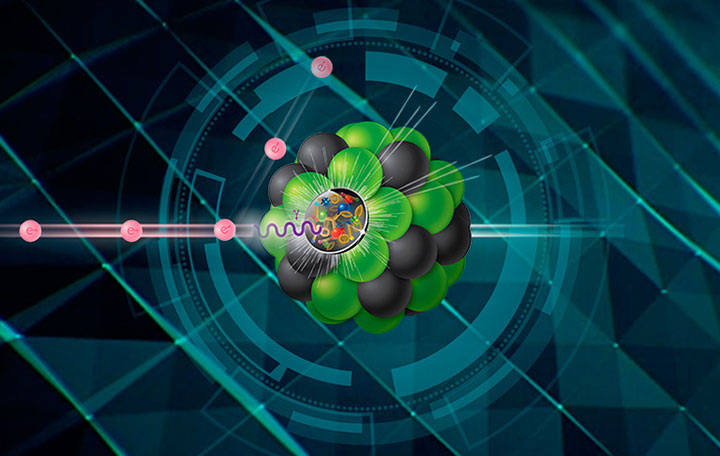 Electrons will collide with protons or larger atomic nuclei at the Electron-Ion Collider to produce dynamic 3-D snapshots of the building blocks of all visible matter.

UPTON, NY— Yesterday, the U.S. Department of Energy (DOE) named Brookhaven National Laboratory on Long Island in New York as the site for building an Electron-Ion Collider (EIC), a one-of-a-kind nuclear physics research facility. This announcement, following DOE’s approval of “mission need” (known as Critical Decision 0) on December 19, 2019, enables work to begin on R&D and the conceptual design for this next-generation collider at Brookhaven Lab.

"The EIC promises to keep America in the forefront of nuclear physics research and particle accelerator technology, critical components of overall U.S. leadership in science,” said U.S. Secretary of Energy Dan Brouillette. “This facility will deepen our understanding of nature and is expected to be the source of insights ultimately leading to new technology and innovation.”

“America is in the golden age of innovation, and we are eager to take this next step with EIC. The EIC will not only ensure U.S. leadership in nuclear physics, but the technology developed for EIC will also support potential tremendous breakthroughs impacting human health, national competitiveness, and national security,” said Under Secretary for Science Paul Dabbar. “We look forward to our continued world-leading scientific discoveries in conjunction with our international partners.” 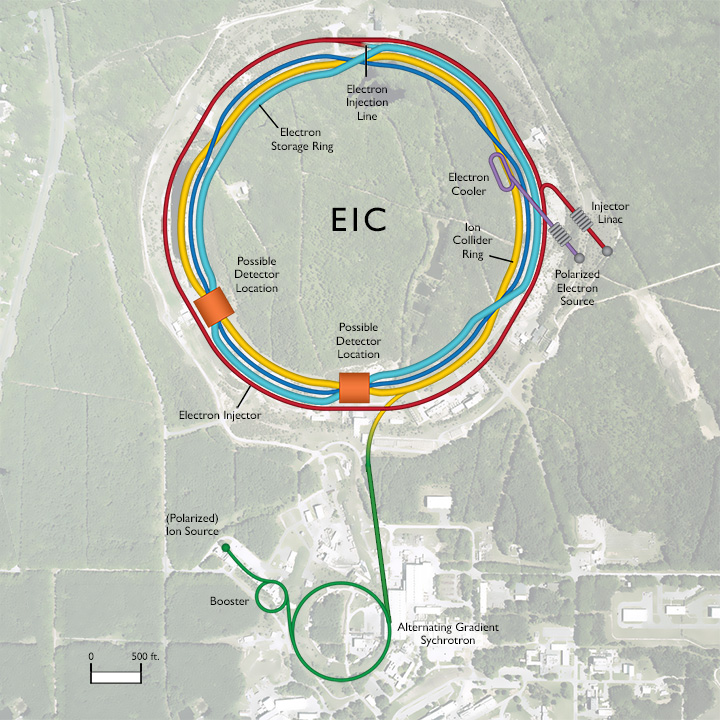 This schematic shows how the EIC will fit within the tunnel of the Relativistic Heavy Ion Collider (RHIC, background photo), reusing essential infrastructure and key components of RHIC.

The EIC will be funded by the federal government through the DOE Office of Science, drawing on expertise from throughout the DOE national laboratory complex and at universities and research institutions around the world, including Stony Brook University, a managing partner of Brookhaven Lab. International participation is also anticipated. Thomas Jefferson National Accelerator Facility (Jefferson Lab) in Newport News, Virginia, is expected to be a major partner in the project and make significant contributions. Expertise and participation from across the national laboratory complex will be required to implement the facility successfully.

“The EIectron-Ion Collider will open up a new frontier in nuclear physics that will expand our knowledge of the fundamental constituents of the atoms that make up all visible matter in the universe today and the force that holds it all together,” said Brookhaven Lab Director Doon Gibbs. “We look forward to working with Jefferson Lab, other DOE labs, universities and the worldwide EIC user community—about 1000 scientists from 30 nations—to deliver the EIC and advance this important field of science.”

The world-leading science that an EIC will achieve and the technological advances needed to make it a reality have the potential to power the advanced technologies of tomorrow, benefiting health and medicine, national security, nuclear energy, radioisotope production, and industrial uses of particle beams.

New York’s elected officials at the federal and state level have been strong advocates for bringing the EIC project to Brookhaven.

“The Lab is used to taking on big projects, critical research, and the most serious questions science can pose. This multi-billion federal investment will guarantee Brookhaven National Lab continues to be a world class research facility for the next generation,” said U.S. Senator Charles Schumer.”

U.S. Representative Lee Zeldin, who serves the district where Brookhaven Lab is located, said, “This cutting edge project will inject billions of dollars and an extensive number of jobs into New York’s First Congressional District, all while churning out scores of scientific discoveries that help us understand the world around us.”

New York Governor Andrew M. Cuomo said, “New York State has a strong record of backing both Brookhaven National Laboratory and the innovation corridor across Long Island—and we are proud that our $165 million in grants to the Laboratory have helped prepare for a one-of-a-kind electron-ion collider on Long Island. Investing in Brookhaven Lab will ensure that, as we enter the new decade, the Empire State remains at the forefront of scientific discovery, while creating thousands of jobs and generating billions of dollars in new economic activity.”

Of the NY State commitment, $100 million will support targeted upgrades of existing infrastructure at Brookhaven Lab, including roads and utilities essential for the EIC facility. This engineering and construction activity is anticipated to be performed by New York-area firms and subcontractors, drawing on local suppliers of labor and material.

The design for an EIC at Brookhaven includes building a new electron storage ring and electron accelerator components that would operate seamlessly with existing infrastructure currently providing beams for the Relativistic Heavy Ion Collider (RHIC), a DOE Office of Science user facility that has been serving nuclear physicists since it began operations in 2000. The new electron ring will allow electrons to interact with protons and large nuclei to precisely probe and produce dynamic snapshots of the building blocks of these nuclear particles (see sidebar).

“RHIC has been one of the pillars of the U.S. nuclear physics program for the past two decades,” said Robert Tribble, Brookhaven’s Deputy Director for Science and Technology. “It has consistently surpassed all expectations for performance, delivering unprecedented discoveries in the field and building a solid foundation for this new machine.”

Building the EIC will maintain U.S. leadership in nuclear physics and accelerator science—fields that are crucial to our technological, economic, and national security—and train the next generation of experts in these fields. In addition, the technological advances already under development to make the EIC a reality—e.g., innovative accelerator, particle tracking, and data-management components—could have widespread impact on new approaches to cancer therapy, solving other “big data” challenges, and improving accelerator facilities for testing batteries, catalysts, and other energy-related materials.

The knowledge stemming from research at the EIC will be published in the open scientific research literature and available to all partners, including commercial partners.

The collider-accelerator infrastructure that powers the EIC at Brookhaven will also be available to researchers who use particle beams to produce and conduct studies on medical isotopes and to study the effects of simulated space radiation with the aim of protecting future astronauts.

“We are grateful to the Department of Energy for its choice of Brookhaven as the host for the EIC, and look forward to working with Jefferson Lab and other national labs to bring it to completion,” said Gibbs. “We also recognize New York State’s financial commitment to help us deliver this facility and its benefits to the nation and the world.”

Sidebar: Science at the EIC

Research at the EIC will take our understanding of matter to the next level—beyond the interactions of atomic nuclei with their orbiting electrons, which power the electronic and information technologies we now use every day, to the forces acting inside the nucleus.

The EIC will allow nuclear physicists to track the arrangement of the quarks and gluons that make up the protons and neutrons of atomic nuclei.

Acting somewhat like a CT scanner for atoms, the EIC will allow nuclear physicists to track the arrangement of the quarks and gluons that make up the protons and neutrons of atomic nuclei. Scientists will use data collected from millions of collisions between electrons and protons and a wide range of larger atomic nuclei to study the “strong nuclear force” and to answer other longstanding questions in physics, including where the proton gets its “spin.”

The strong force, carried by the glue-like gluons, is the strongest and least-understood force in nature—more than 100 times more powerful than the electromagnetic force that governs today’s technologies. No one knows for sure where a deeper understanding of the strong force could lead, but knowledge gained through explorations at an EIC could open new opportunities. Understanding the origins of proton spin–currently used in magnetic resonance imaging—may also yield applications derived from this fundamental physics knowledge.

“I am very pleased that Brookhaven National Laboratory was chosen to host a new, nuclear physics research facility that will help us understand the science that binds us together. The Electron-Ion Collider will help Brookhaven continue to push boundaries and be at the forefront of scientific progress, attract world-class scientists to Long Island, and grow the local high-tech economy.”
— U.S. Senator Kirsten Gillibrand

"This project was made possible by the world class scientific expertise at Brookhaven Lab, Stony Brook University and the entire SUNY System. The collaboration between the DOE and SUNY is deeply rooted in years of successful scientific and technical achievement. SUNY is committed to doing everything possible to support the EIC and help maintain U.S. leadership in physics while looking for innovative ways to spin-off new companies, products and processes from the discoveries that will be made possible by the EIC.”
— Kristina Johnson, Chancellor of the State University of New York (SUNY) system

Brookhaven National Laboratory is supported by the U.S. Department of Energy’s Office of Science. The Office of Science is the single largest supporter of basic research in the physical sciences in the United States and is working to address some of the most pressing challenges of our time. For more information, visit https://www.energy.gov/science .