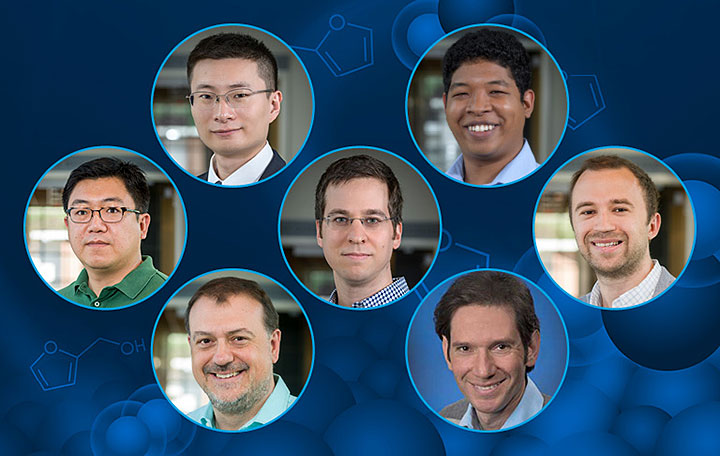 (Top row) Jiayi Fu, Jonathan Lym, (middle row) Weiqing Zheng, Konstantinos Alexopoulos, Alexander Mironenko, and (bottom row) Dionisios Vlachos of the Catalysis Center for Energy Innovation—a U.S. Department of Energy (DOE) Energy Frontier Research Center at the University of Delaware—and Anibal Boscoboinik of Brookhaven Lab's Center for Functional Nanomaterials. The scientists are part of a team that designed and characterized a catalyst to promote the selective breaking of a carbon-oxygen bond in a plant derivative (chemical structure with the OH side group shown in the image background) to produce a potential biofuel.

UPTON, NY—Scientists have designed a catalyst composed of very low concentrations of platinum (single atoms and clusters smaller than billionths of a meter) on the surface of titanium dioxide. They demonstrated how this catalyst significantly enhances the rate of breaking a particular carbon-oxygen bond for the conversion of a plant derivative (furfuryl alcohol) into a potential biofuel (2-methylfuran). Their strategy—described in a paper published in Nature Catalysis on Mar. 23—could be applied to design stable, active, and selective catalysts based on a wide range of metals supported on metal oxides to produce industrially useful chemicals and fuels from biomass-derived molecules. 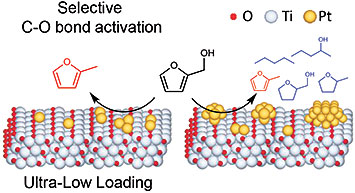 Scientists loaded single atoms of platinum (yellow) on top of titania, a compound containing titanium (grey) and oxygen (red). This catalyst selectively breaks a bond between a carbon and oxygen in furfuryl alcohol, a five-member ring-shaped molecule with an attached side group (structure in black).

“For a molecule to generate a particular product, the reaction has to be directed along a certain pathway because many side reactions that are not selective for the desired product are possible,” explained co-author Anibal Boscoboinik, a staff scientist in the Center for Functional Nanomaterials (CFN) Interface Science and Catalysis Group at the U.S. Department of Energy’s (DOE) Brookhaven National Laboratory. “To convert furfuryl alcohol into biofuel, the bond between carbon and oxygen atoms on the side group attached to the ring-shaped part of the molecule must be broken, without producing any reactions in the ring. Typically, the metal catalyst that breaks this bond also activates ring-related reactions. However, the catalyst designed in this study only breaks the side group carbon-oxygen bond.”

Aromatic rings are structures with atoms connected through single or double bonds. In molecules derived from plant waste, aromatic rings often have oxygen-containing side groups. Transforming plant waste derivatives into useful products requires the removal of oxygen from these side groups by breaking specific carbon-oxygen bonds.

“Biomass contains a lot of oxygen, which needs to be partially removed to leave behind more useful molecules for the production of renewable fuels, plastics, and high-performance lubricants,” said co-first author Jiayi Fu, a graduate student at the Catalysis Center for Energy Innovation (CCEI) at the University of Delaware (UD). “Hydrodeoxygenation, a reaction in which hydrogen is used as a reactant to remove oxygen from a molecule, is useful for converting biomass into value-added products.”

In this study, the scientists hypothesized that adding noble metals to the surfaces of moderately reducible metal oxides—those that can lose and gain oxygen atoms—would promote hydrodeoxygenation.

“Removing oxygen from the oxide surface forms an anchoring site where molecules can be held in place so the necessary bonds can be broken and formed,” said co-first author and UD CCEI graduate student Jonathan Lym. “Previous studies in the catalysis and semiconductor communities have shown how much impurities can influence the surface.”

To test their hypothesis, the team selected platinum as the noble metal and titanium dioxide (titania) as the metal oxide. Theoretical calculations and modeling indicated that the formation of oxygen vacancies is more energetically favorable when single atoms of platinum are introduced onto the surface of titania. 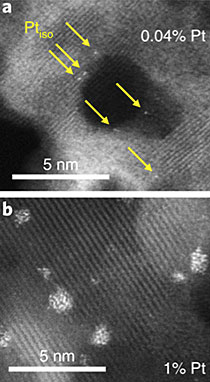 Scanning transmission electron microscope images of the platinum on titania catalyst. At a platinum concentration of 0.04 percent (top), isolated atoms (yellow arrows) are observed. When this concentration is increased to 1 percent (bottom), the atoms begin to combine into clusters.

After synthesizing the platinum-titania catalyst at UD, they performed various structural and chemical characterization studies using facilities at Brookhaven and Argonne National Labs. At the CFN Electron Microscopy Facility, they imaged the catalyst at high resolution with a scanning transmission electron microscope. At Brookhaven’s National Synchrotron Light Source II (NSLS-II), they used the In situ and Operando Soft X-ray Spectroscopy (IOS) beamline and the Quick X-ray Absorption and Scattering (QAS) beamline to track the chemical (oxidation) state of platinum. Through complementary x-ray spectroscopy studies at Argonne’s Advanced Photon Source (APS), they determined the distance between atoms in the catalyst.

“This work is a great example of how scientific user facilities provide researchers with the complementary information needed to understand complex materials,” said CFN Director Chuck Black. “The CFN is committed to our partnership with NSLS-II to enable these sorts of studies by scientists from around the world.”

Back at Delaware, the team performed reactivity studies in which they put the catalyst and furfuryl alcohol in a reactor and detected the products through gas chromatography, an analytical chemistry separation technique. In addition to these experiments, they theoretically calculated the amount of energy required for different steps of the reaction to proceed. On the basis of these calculations, they ran computer simulations to determine the preferable reaction pathways. The simulated and experimental product distributions both indicated that negligible ring-reaction products are generated when a low concentration of platinum is present. As this concentration is increased, the platinum atoms begin to aggregate into larger clusters that incite ring reactions.

“The complementary experimental and computational framework allows for a detailed understanding of what is happening on the surface of a very complex material in a way that we can generalize concepts for the rational design of catalysts,” said Boscoboinik. “These concepts can help in predicting suitable combinations of metals and metal oxides to carry out desired reactions for converting other molecules into valuable products.”

This research was supported by CCEI, a DOE Energy Frontier Research Center led by Vlachos at UD. The APS, CFN, and NSLS-II are all DOE Office of Science User Facilities. The experiments conducted at the IOS beamline relied on the ambient-pressure x-ray photoelectron spectroscopy instrument operated as a partnership between NSLS-II and CFN. The QAS beamline is one of the partner beamlines of DOE’s Synchrotron Catalysis Consortium, a group that provides support to the catalysis user community.