Scientists previously observed this peculiar behavior—characterized by electrons preferentially traveling along one direction, decoupled from the host crystal structure—in other materials whose ability to conduct electricity without energy loss cannot be explained by standard theoretical frameworks 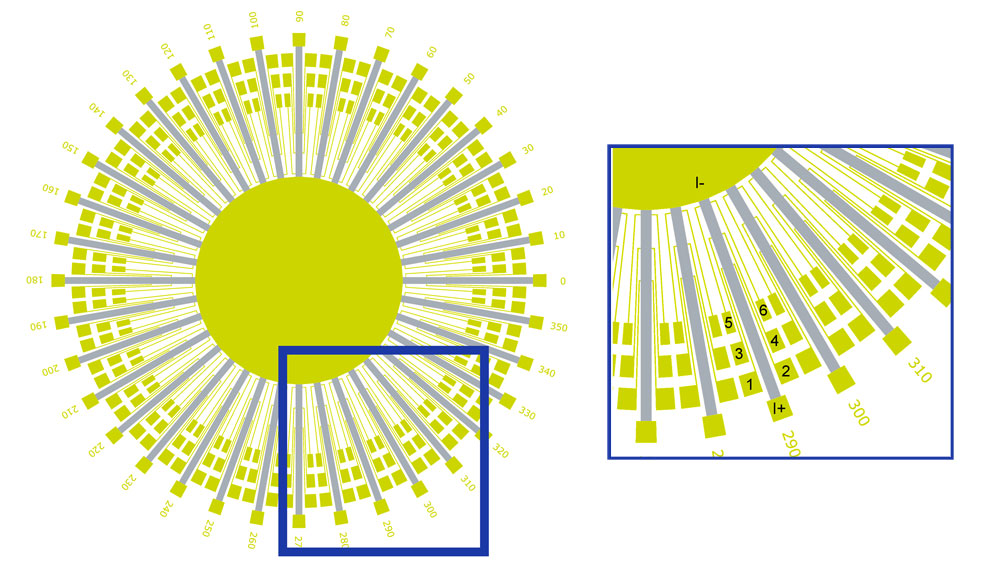 Scientists patterned thin films of strontium ruthenate—a metallic superconductor containing strontium, ruthenium, and oxygen—into the "sunbeam" configuration seen above. They arranged a total of 36 lines radially in 10-degree increments to cover the entire range from 0 to 360 degrees. On each bar, electrical current flows from I+ to I-. They measured the voltages vertically along the lines (between gold contacts 1-3, 2-4, 3-5, and 4-6) and horizontally across them (1-2, 3-4, 5-6). Their measurements revealed that electrons in strontium ruthenate flow in a preferred direction unexpected from the crystal lattice structure.

This “electronic nematicity”—the discovery of which is reported in a paper published on May 4 in the Proceedings of the National Academy of Sciences—may promote the material’s “unconventional” superconductivity. For unconventional superconductors, standard theories of metallic conduction are inadequate to explain how upon cooling they can conduct electricity without resistance (i.e., losing energy to heat). If scientists can come up with an appropriate theory, they may be able to design superconductors that don’t require expensive cooling to achieve their near-perfect energy efficiency.

“We imagine a metal as a solid framework of atoms, through which electrons flow like a gas or liquid,” said corresponding author Ivan Bozovic, a senior scientist and the leader of the Oxide Molecular Beam Epitaxy Group in the Condensed Matter Physics and Materials Science (CMPMS) Division at the U.S. Department of Energy’s (DOE) Brookhaven National Laboratory and an adjunct professor in the Department of Chemistry at Yale. “Gases and liquids are isotropic, meaning their properties are uniform in all directions. The same is true for electron gases or liquids in ordinary metals like copper or aluminum. But in the last decade, we have learned that this isotropy doesn’t seem to hold in some more exotic metals.”

Scientists have previously observed symmetry-breaking electronic nematicity in other unconventional superconductors. In 2017, Bozovic and his team detected the phenomenon in a metallic compound containing lanthanum, strontium, copper, and oxygen (LSCO), which becomes superconducting at relatively higher (but still ultracold) temperatures compared to low-temperature counterparts like strontium ruthenate. The LSCO crystal lattice also has square symmetry, with two equal periodicities, or arrangements of atoms, in the vertical and horizontal directions. But the electrons do not obey this symmetry; the electrical resistivity is higher in one direction unaligned with the crystal axes.

“We see this kind of behavior in liquid crystals, which polarize light in TVs and other displays,” said Bozovic. “Liquid crystals flow like liquids but orient in a preferred direction like solids because the molecules have an elongated rod-like shape. This shape constrains rotation by the molecules when packed close together. Liquids are typically symmetric with respect to any rotation, but liquid crystals break such rotational symmetry, with their properties different in the parallel and perpendicular directions. This is what we saw in LSCO—the electrons behave like an electronic liquid crystal.”

With this surprising discovery, the scientists wondered whether electronic nematicity existed in other unconventional superconductors. To begin addressing this question, they decided to focus on strontium ruthenate, which has the same crystal structure as LSCO and strongly interacting electrons.

Brookhaven Lab scientists (left to right) Anthony Bollinger, Ivan Bozovic, Xi He, Ian Robinson, and Jie Wu of the Condensed Matter Physics and Materials Science Division and collaborators at Cornell found evidence of an electronic "liquid crystal" state in a superconductor called strontium ruthenate. In this exotic state, electrons flow in a preferred direction that is unexpected from the arrangement of atoms in the host material's crystal lattice.

At the Kavli Institute at Cornell for Nanoscale Science, Darrell Schlom, Kyle Shen, and their collaborators grew single-crystal thin films of strontium ruthenate one atomic layer at a time on square substrates and rectangular ones, which elongated the films in one direction. These films have to be extremely uniform in thickness and composition—having on the order of one impurity per trillion atoms—to become superconducting.

To verify that the crystal periodicity of the films was the same as that of the underlying substrates, the Brookhaven Lab scientists performed high-resolution x-ray diffraction experiments.

“X-ray diffraction allows us to precisely measure the lattice periodicity of both the films and the substrates in different directions,” said coauthor and CMPMS Division X-ray Scattering Group Leader Ian Robinson, who made the measurements. “In order to determine whether the lattice distortion plays a role in nematicity, we first needed to know if there is any distortion and how much.”

Bozovic’s group then patterned the millimeter-sized films into a “sunbeam” configuration with 36 lines arranged radially in 10-degree increments. They passed electrical current through these lines—each of which contained three pairs of voltage contacts—and measured the voltages vertically along the lines (longitudinal direction) and horizontally across them (transverse direction). These measurements were collected over a range of temperatures, generating thousands of data files per thin film. 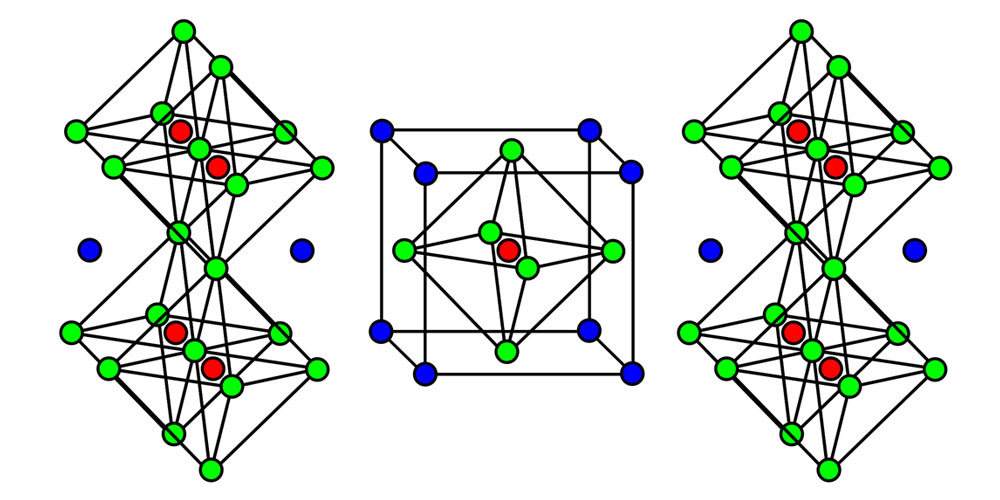 The crystal structure of strontium ruthenate, which is made up of ruthenium (red), strontium (blue), and oxygen (green).

Compared to the longitudinal voltage, the transverse voltage is 100 times more sensitive to nematicity. If the current flows with no preferred direction, the transverse voltage should be zero at every angle. That wasn’t the case, indicating that strontium ruthenate is electronically nematic—10 times more so than LSCO. Even more surprising was that the films grown on both square and rectangular substrates had the same magnitude of nematicity—the relative difference in resistivity between two directions—despite the lattice distortion caused by the rectangular substrate. Stretching the lattice only affected the nematicity orientation, with the direction of highest conductivity running along the shorter side of the rectangle. Nematicity is already present in both films at room temperature and significantly increases as the films are cooled down to the superconducting state.

“Our observations point to a purely electronic origin of nematicity,” said Bozovic. “Here, interactions between electrons bumping into each other appear to have a much stronger contribution to electrical resistivity than electrons interacting with the crystal lattice, as they do in conventional metals.”

Going forward, the team will continue to test their hypothesis that electronic nematicity exists in all nonconventional superconductors.

“The synergy between the two CMPMS Division groups at Brookhaven was critical to this research,” said Bozovic. “We will apply our complementary expertise, techniques, and equipment in future studies looking for signatures of electronic nematicity in other materials with strongly interacting electrons.”

This work was funded by the DOE Office of Science, the Gordon and Betty Moore Foundation, and the National Science Foundation.