The following news release was issued by Japan’s High Energy Accelerator Research Organization (KEK), home of the SuperKEKB electron-positron collider and the Belle II physics experiment. In addition to helping to design and build superconducting magnets for the SuperKEKB collider, as described in this release, scientists from the U.S. Department of Energy’s Brookhaven National Laboratory play significant roles in the physics research and data handling for the Belle II experiment. To learn more about Brookhaven’s contributions, see our Belle II website or this overview. To interview Brookhaven Lab Belle II scientists or SuperKEKB magnet developers, contact Karen McNulty Walsh, kmcnulty@bnl.gov, (631) 344-8350. 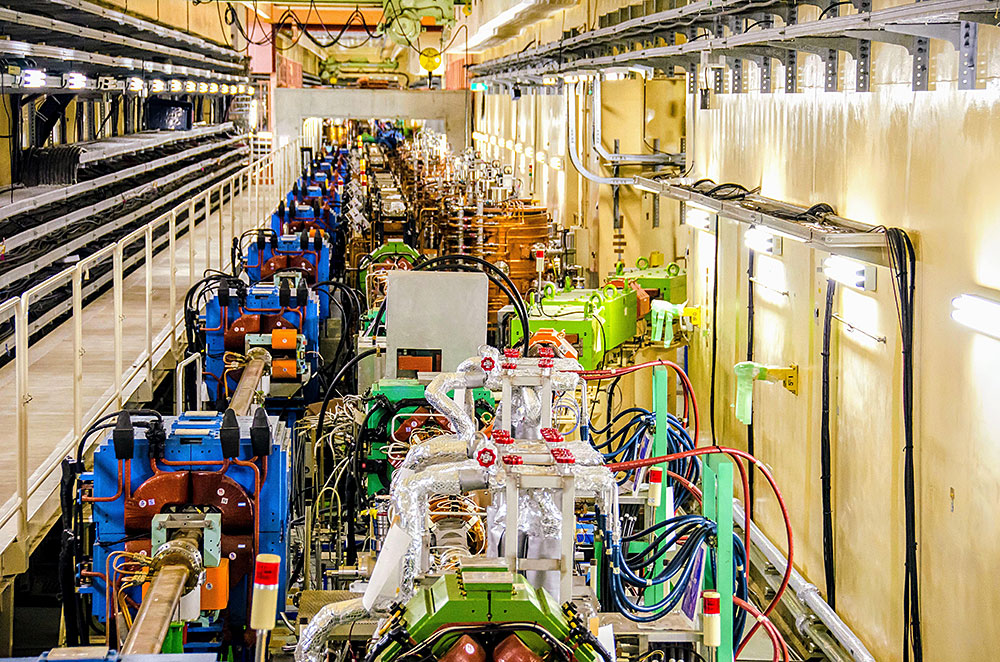 Japan's High Energy Accelerator Research Organization (KEK) has been steadily improving the performance of its flagship electron-positron collider, SuperKEKB, since it produced its first electron-positron collisions in April 2018.  At 20:34 on 15th June 2020, SuperKEKB achieved the world's highest instantaneous luminosity for a colliding-beam accelerator, setting a record of 2.22×1034 cm-2 s-1. Previously, the KEKB collider, which was SuperKEKB's predecessor and was operated by KEK from 1999 to 2010, had achieved the world’s highest luminosity, reaching 2.11×1034 cm-2 s-1. KEKB's record was surpassed in 2018, when the LHC proton-proton collider at the European Organization for Nuclear Research (CERN) overtook the KEKB luminosity at 2.14×1034 cm-2 s-1. SuperKEKB's recent achievement returns the title of world’s highest luminosity colliding-beam accelerator to KEK.[1]

In the coming years, the luminosity of SuperKEKB will be increased to approximately 40 times the new record. This exceptionally high luminosity is to be achieved mainly by using a beam collision method called the "nano-beam scheme", developed by Italian physicist Pantaleo Raimondi. Raimondi’s innovation enables significant increases in luminosity by using powerful magnets to squeeze the two beams in both the horizontal and vertical directions. Substantially decreasing the beam sizes increases the luminosity, which varies inversely with the cross-sectional area of the colliding beams.

SuperKEKB is the first collider in the world to realize the nano-beam scheme. In the beam operation of SuperKEKB, we keep increasing the luminosity by squeezing the beams ever harder, while solving various problems associated with the squeezing. Currently, the vertical height of the beams at the collision point is about 220 nanometers, and this will decrease to approximately 50 nanometers (about 1/1000 the width of a human hair) in the future. 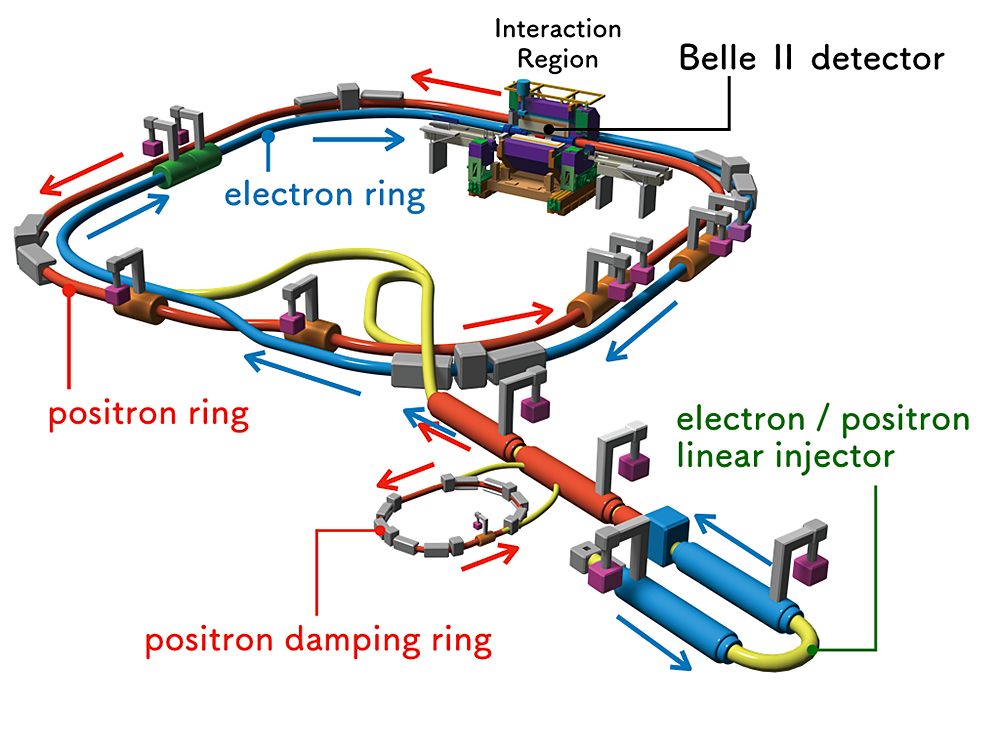 Another factor that determines luminosity is the product of the two beam currents, which is proportional to the product of the numbers of electrons and positrons stored in the collider. KEK physicists and accelerator operators continue to increase the beam currents, while mitigating various high-current problems, such as stray background particles that introduce noise in the Belle II detector. SuperKEKB achieved the new luminosity record with a product of beam currents that was less than 25% that of KEKB. This demonstrates the superiority of the SuperKEKB design. In the future, we aim to increase the beam current product to about four times the value achieved by KEKB.

In order to adopt the nano-beam scheme and increase the beam current, KEKB underwent significant upgrades that turned it into SuperKEKB. These included a new beam pipe, new superconducting final-focusing magnets, a positron damping ring, and an advanced injector. The most recent improvement was completed in April 2020, with the introduction of the “crab waist”, first used at the DAΦNE accelerator in Frascati, Italy, in 2010, and which reduces the beam size and stabilizes collisions.

The success of SuperKEKB relies also on contributions from overseas. As an example, the superconducting final-focusing magnets were built in cooperation with Brookhaven National Laboratory and Fermi National Accelerator Laboratory in the U.S. under the U.S.-Japan Science and Technology Cooperation Program. Other major contributions under this program were the development of a collision-point orbit feedback system (SLAC National Accelerator Laboratory) and an X-ray beam size monitor (University of Hawaii and SLAC National Accelerator Laboratory). Researchers from CERN (Switzerland), IJCLab (France), IHEP (China), and many other foreign research institutes have participated in accelerator research and operation under KEK's Multinational Partnership Project (MNPP-01). An example of one of this program’s outcomes is the luminosity monitoring system developed at BINP (Russia). Other important contributions have come through the Belle II experiment collaboration, such as the diamond-based radiation monitor and beam abort system (INFN and University of Trieste, Italy). 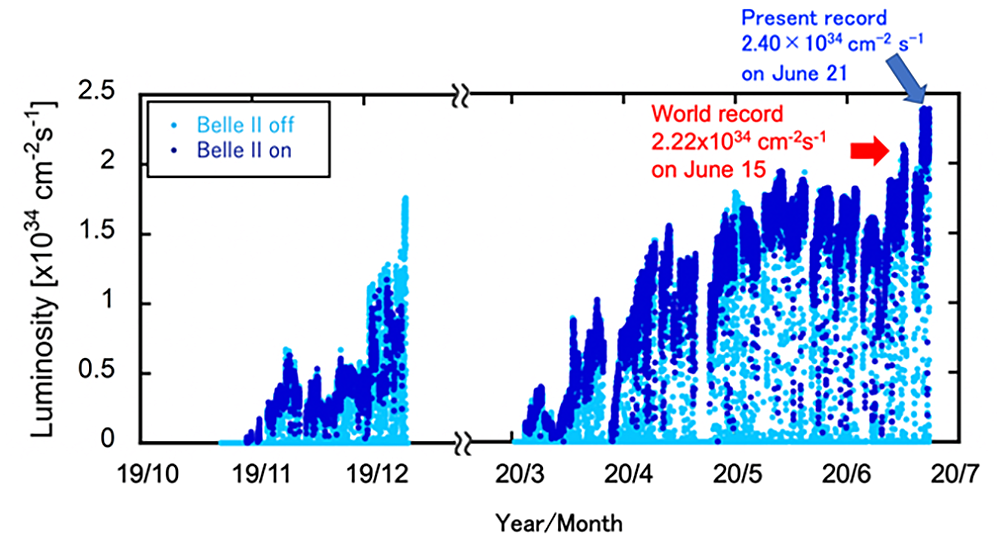 The instantaneous luminosity of SuperKEK measured at 5-minute intervals from Fall 2019 to June 22, 2020. Values are on-line measurements and contain an approximate 1% error. (Credit: KEK)

SuperKEKB brings its electron and positron beams into collision at the center of the Belle II particle detector. The detector has been built and is operated by the Belle II collaboration, an international group of approximately 1,000 physicists and engineers from 119 universities and laboratories located in 26 countries and regions around the world.   Belle II physicists use the detector to explore fundamental physics phenomena, by studying the production and decay processes of particles produced in the collisions, primarily B mesons, D mesons, and tau leptons.  To within the precision of current measurements, the behavior of particles such as these is well described by the theory known as the Standard Model. However, the Standard Model fails to address key questions, such as the mystery of the matter-dominated universe and the existence of dark matter. Therefore, new physical laws are needed to explain these observations.  Signals of such “new physics” may arise in decay processes that are very rarely observed. Maximizing the discovery potential of Belle II for such signals requires a large number of electron-positron collisions, necessitating a very high-luminosity collider, such as SuperKEKB.

Collecting data for about 10 years, the Belle II experiment will accumulate 50 times more particle collisions than its predecessor, the Belle experiment. The large data set, containing about 50 billion B-meson pairs and similar numbers of charm mesons and tau leptons, will enable Belle II physicists to explore nature at a much deeper level than was previously possible. The data will also be used in sensitive searches for very weakly interacting particles that may help answer some of the outstanding mysteries of the universe.