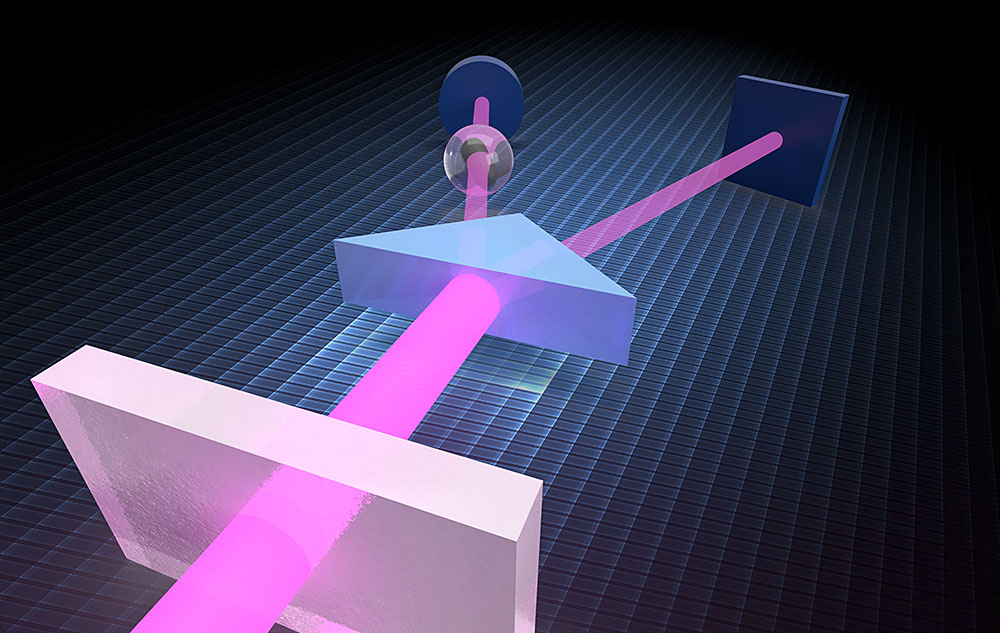 An artist's interpretation of ghost imaging. In this research technique, scientists split an x-ray beam (represented by the thick pink line) into two streams of entangled photons (thinner pink lines). Only one of these streams of photons passes through the scientific sample (represented by the clear circle), but both gather information. By splitting the beam, the sample being studied is only exposed to a fraction of the x-ray dose.

UPTON, NY—Scientists at the U.S. Department of Energy’s (DOE) Brookhaven National Laboratory have begun building a quantum-enhanced x-ray microscope at the National Synchrotron Light Source II (NSLS-II). This groundbreaking microscope, supported by the Biological and Environmental Research progam at DOE’s Office of Science, will enable researchers to image biomolecules like never before.

NSLS-II is a DOE Office of Science User Facility where researchers use powerful x-rays to “see” the structural, chemical, and electronic makeup of materials down to the atomic scale. The facility’s ultrabright light already enables discoveries in biology, helping researchers uncover the structures of proteins to inform drug design for a variety of diseases—to name just one example.

Now, by tapping into the quantum properties of x-rays, researchers at NSLS-II will be able to image more sensitive biomolecules without sacrificing resolution. While the high penetration power of x-rays enables superior resolution for imaging studies, this powerful light can also damage certain biological samples, such as plant cells, viruses, and bacteria. Low-dose x-ray studies can preserve these samples, but the imaging resolution is reduced. 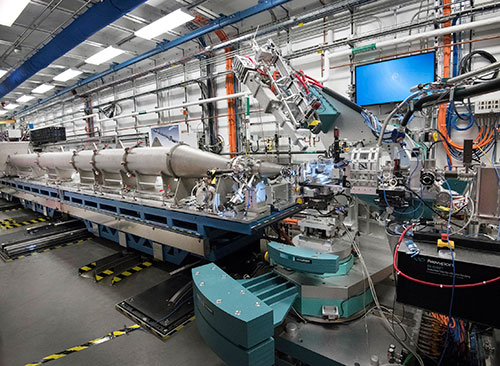 “If we are successful in building a quantum-enhanced x-ray microscope, we will be able to image biomolecules with very high resolution and a very low dose of x-rays,” said Sean McSweeney, manager of the structural biology program at NSLS-II.

The quantum-enhanced x-ray microscope at NSLS-II will achieve this remarkable combination of capabilities through an experimental technique called ghost imaging. Compared to typical x-ray imaging techniques, which send a single beam of photons (particles of light) through a sample and onto a detector, ghost imaging requires the x-ray beam be split into two streams of entangled photons—only one of which passes through the sample, but both gather information.

“One stream goes through the sample and is collected by a detector that records the photons with good time resolution, while the other stream of photons encodes the exact direction in which the photons propagate,” said Andrei Fluerasu, lead beamline scientist at NSLS-II’s Coherent Hard X-ray Scattering (CHX) beamline, where the microscope will be developed. “It sounds like magic. But with mathematical calculations, we’ll be able to correlate the information from the two beams.”

Ghost imaging techniques have already been successfully developed using photons of visible light, but translating this technique to x-ray light will be a major scientific achievement.

The quantum-enhanced x-ray microscope at Brookhaven Lab is being developed at NSLS-II’s CHX beamline, which was chosen for its ability to manipulate the coherence of the x-ray source, enabling scientists to tune the ghost imaging experiments as needed. CHX’s existing setup was also flexible enough to accommodate the addition of new and advanced equipment, such as a beam splitter and a new detector. NSLS-II will collaborate with physicists at Brookhaven Lab and Stony Brook University on the integration of these complex instruments.

“These measurements will require imaging detectors with the best possible timing resolution,” said Brookhaven physicist Andrei Nomerotski, “and this is something we are already using for high energy physics experiments, quantum information science projects like quantum astrometry, and fast optical imaging.”

The quantum-enhanced x-ray microscope project team will also collaborate with Brookhaven’s Computational Science Initiative (CSI) on data analysis. The Lab’s biology department is partnering with NSLS-II to design experiments that exploit the advanced capabilities of this microscope.

“Our Biology colleagues at Brookhaven are excited to bring us complex problems to solve using this new instrument,” McSweeney said. “With involvement from Physics, Biology, and CSI, we have put an excellent team together for this groundbreaking project.”

The team plans to gradually integrate new functionalities into the CHX beamline over the next two to three years. The project will be complete upon demonstrating ghost imaging of micron-sized objects with resolution below 10 nanometers, which is targeted for 2023.