Members of the Relativistic Heavy Ion Collider (RHIC) and Alternating Gradient Synchrotron (AGS) user community celebrated the future and the past at their 2010 users’ meeting by marking a trio of impressive anniversaries and an exceptional physics run.

The annual meeting, held June 7-11, brought together about 180 participants to learn about recent results, updates from management, and the current funding picture.

Following three days of workshops and a symposium on education and public outreach — sponsored with the National Users’ Facility Organization — attendees gathered in Berkner hall for the plenary session and a special event dubbed “90-50-10.” The numeric-heavy celebration recognized the 90th birthday of Ernest Courant — one of three scientists who originated the idea of “strong focusing” accelerators — the 50th anniversary of the startup of the AGS, and the 10th anniversary of RHIC operations.

During the plenary session, presenters from BNL’s Collider-Accelerator Department (C-AD) and the PHENIX and STAR experiments provided updates and details of Run 10, which provided beam collisions from New Year’s Eve 2009 up until the week of the users’ meeting in early June.

The run was devoted to gold-gold collisions over a wide range of energies, including the lowest beam energy ever attempted at RHIC — 3.85 GeV. This energy scan will help scientists search the nuclear matter phase diagram for a possible “critical point,” a unique combination of temperature and net quark density that separates regions of sharp vs. smooth transitions between normal matter and quark gluon plasma.

Run 10 experiments benefited from the highest luminosity — or beam intensity — that has ever been seen in RHIC, said run coordinator Kevin Brown (C-AD). This is due to a number of improvements made to the accelerator system, including bunched-beam stochastic cooling, lattice optics modifications to avoid instabilities, and new and improved feedback systems to more effectively control the optics and variations of the ion beam orbits. As a result, luminosity was increased by a factor of two as compared to Run 7, Brown said.

That luminosity was extremely beneficial for experimenters at PHENIX and STAR, who met or exceeded all of their Run 10 goals, said Creighton University’s Yury Gorbunov and the City University of New York’s Stefan Bathe.

Allena Opper, program director for Nuclear Physics at the National Science Foundation (NSF), told users that, if approved, the President’s request for fiscal year (FY) 2011would boost NSF’s overall budget by 8.2 percent. Of that, the physics division would receive a 2.8 percent increase.

“Unfortunately, the overall increase didn’t filter down to physics as well as we might have hoped,” Opper said.

The good news, she said, is that much of additional money coming into the physics division will be directed toward awards for private investigators; those programs would see an 11.4 percent budget increase over FY 2010.

Earlier in the week, the U.S. Department of Energy (DOE) perspective on nuclear physics funding and outlook was presented by Tim Hallman, the Associate Director for Nuclear Physics within DOE’s Office of Science. Hallman presented recent research highlights and upcoming facilities funded by the Office of Nuclear Physics. He emphasized the importance of making the case for how technological developments driven by basic research needs are addressing more general needs of society, and included many recent examples in his talk.

And the Award Goes to… 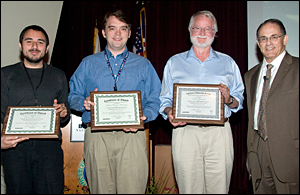 There were two recipients of this year’s thesis award competition: Burak Alver (Massachusetts Institute of Technology) for his work, “Studies of Elliptic Flow Fluctuations and Non-flow Correlations in Heavy Ion Collisions Using the PHOBOS Detector,” and Michael McCumber (University of Colorado at Boulder) for his work, Measurement of Fast Parton Interactions with Hot Dense Nuclear Matter via Two-Particle Correlations at PHENIX.” Lab Director Sam Aronson presented Alver and McCumber with the awards and checks for $3,000. The University of Tennessee’s Irakli Garishvili received an honorable mention.

The “90-50-10" celebration, held on the last two days of the meeting, filled Berkner Hall with an audience eager to hear reminiscences and talks about the past, present, and future of RHIC and AGS. More than 20 scientific leaders, including two Nobel Prize winners for work done at BNL, took the stage with stories of Brookhaven’s early days, fierce international competition, and building physics equipment with their own two hands.

“When I got here, it looked like an army camp, filled with barracks,” said Courant, the man of the hour, who first visited Brookhaven in 1947. “Part of the hospital had been made into apartments. My wife and I stayed in one of the apartments — inaugurated them, really — and we’re staying in one of them tonight.”

In 1948, Courant joined BNL “for good” as a member of the team assembling Brookhaven’s first accelerator, a proton synchrotron called the Cosmotron. It was the first machine to send particles to the billion electron volt, or GeV, region. In 1952, after reaching the world record of 1.3 GeV — almost five times more energy than ever achieved — word of BNL’s success traveled quickly, Courant said. It particularly interested a team of European physicists who wanted to build a similar, but larger, machine at CERN and formed a study group with the Brookhaven physicists to figure out how it could be done. Building an accelerator 10 times more powerful than the Cosmotron with existing technology would require 100 times more steel and would weigh about 200,000 tons. It was during one of these meetings that Courant, M. Stanley Livingston, and Hartland Snyder presented a solution to this barrier: strong focusing. The breakthrough was achieved by alternating the orientation of the magnets (which had all faced the same way in the Cosmotron) so some of their field gradients faced outward and some faced inward.

When the BNL physicists told the Europeans about their idea, one of them remarked, “I could kick myself that I haven’t thought of that,” Courant said.

This new principle was the basis for Brookhaven’s Alternating Gradient Synchrotron, CERN’s Proton Synchrotron, and numerous other accelerators around the world, including RHIC, where Courant continued to make important contributions.

“Little did I know when I joined Brookhaven back in 1948 that accelerator physics would be my whole career,” he said.

Samuel C.C. Ting, who shared the 1976 Nobel Prize in Physics for the discovery of the J/psi particle, told the audience about his experience with precision experiments on the ground, and most recently, in space.

Ting, who has worked at DESY (the German Electron Synchrotron), AGS, the Positron-Electron Tandem Ring Accelerator (PETRA), and the Large Electron-Positron Collider (LEP), now is heavily involved in the Alpha Magnetic Spectrometer (AMS), a detector that will soon take its home in the International Space Station (ISS) to study charged cosmic rays. In his 40-something year career, Ting said one of his most difficult tasks was acquiring five tons of soap (along with 100 tons of lead and five tons of uranium) for Experiment 598, the AGS study that eventually revealed the J/psi particle.

Ting is now working on something just as challenging, if not more so: sending AMS into space. Backed by institutions from 16 countries (and about 600 scientists), AMS will measure high-energy charged cosmic rays in order to search for antimatter, dark matter, and other mysteries of the universe.

NASA is scheduled to deliver the detector to the ISS on its last scheduled shuttle launch in November 2010, Ting said.

“My biggest worry is that this is different from accelerators,” he said. “In accelerators, if something goes wrong, you can go down by yourself or send a student down to fix it. In space, one mistake will be your last mistake.”

The second Nobel winner to speak, James Cronin, talked about his early days at Brookhaven, first as a research associate at the Cosmotron, and then as a visiting scientist from Princeton on the AGS.

“I want to stress that Brookhaven for me was an extraordinary experience, not only because of what I learned and did in my own physics, but because of all of the people who surrounded me,” Cronin said.

Cronin, who first came to the Lab in 1955 with a starting salary of $500 per month — “Today, that’s one big meal for four people in New York City” — reminisced about the discovery of the long-lived neutral K meson, playing bridge while waiting for the Cosmotron to start up, and the groups of “really, really smart” graduate students who would use the machine.

“I was so lucky to have this experience of interacting with these high-class, smart people going after problems that could be solved with simple, short experiments,” he said. “That gets into your culture.”

Years later, while at Princeton, Cronin made what would be a Nobel Prize-winning discovery with colleague Val Fitch at the AGS, where they had set up a detector built mostly with their own hands. The experiment only ran for one week in 1964.

“You only have to look at the messiness of this book to know that the run was not smooth,” Cronin said while displaying a copy of the historical logbook.

But the 5,211 measured events revealed something very surprising: two different particles can decay into the same products, a violation of a fundamental tenet of physics known as CP.

The audience also heard about the future of accelerator physics at Brookhaven from numerous scientists and managers, including Thomas Roser, chair of the Collider-Accelerator Department, and Steve Vigdor, Associate Laboratory Director for Nuclear and Particle Physics.

EBIS will be a low-maintenance, linear accelerator-based injector capable of producing bright beams and intense bunches of many species of ions, including uranium and helium 3, Roser said. It is being installed now, and could be ready for use in Run 11.

If awarded to Brookhaven by DOE, eRHIC will be based on an Energy Recovery Linac (ERL), a new concept in accelerator technology in which the beam is captured after collision, slowed down, and dumped at the same energy it was produced. This allows for the production of very high-brightness electron beams without limitation from synchrotron radiation, Roser said.

RHIC’s future sits firmly in the Laboratory’s vision for the next 10 years, which, as Vigdor summarized it, is “discovery to deployment in studying femtomatter to nanomatter supported by state-of-the art accelerator facilities, RHIC and NSLS-II.”

“RHIC is an enormously versatile facility just entering its scientific prime,” Vigdor said, adding that through stochastic cooling, RHIC physicists were able to achieve an order of magnitude improvement in heavy ion collision rates four years earlier and at 1/7 the cost that was originally envisioned. Combined with detector upgrades, the RHIC-II science era will permit researchers to quantify the properties of quark-gluon plasma, search for the “critical point,” and study local symmetry violation.

“All this will keep RHIC as the world’s premier facility to study matter under early-universe conditions, even as the Large Hadron Collider turns on,” Vigdor said.

In between RHIC-II science and eRHIC, estimated to start around 2020, Vigdor said a medium-energy version of the electron-ion collider, called MeRHIC, is a possibility. MeRHIC would start at about 5 GeV and be built up to 30 GeV over time.

“We have a real opportunity to position ourselves as a national center for discovery to deployment in accelerator technology,” Vigdor said, noting historical BNL breakthroughs such as strong focusing and the Chasman-Green Lattice, the new formation of the joint Brookhaven/Stony Brook University Center for Accelerator Science and Education, and the possible double use of eRHIC’s ERL as an x-ray free electron laser that would deliver world-leading brightness for materials studies.

“This expertise and culture of accelerator science and technology is the gift that keeps on giving,” Vigdor said. “It’s the unifying force underpinning the approach to our femtomatter to nanomatter destiny. It is the real legacy of Ernest Courant, the AGS, and RHIC, as well as other recent BNL honorees.”