Postdoctoral theorist recognized for her work at the intersection of fundamental particles, the cosmos, and quantum computing 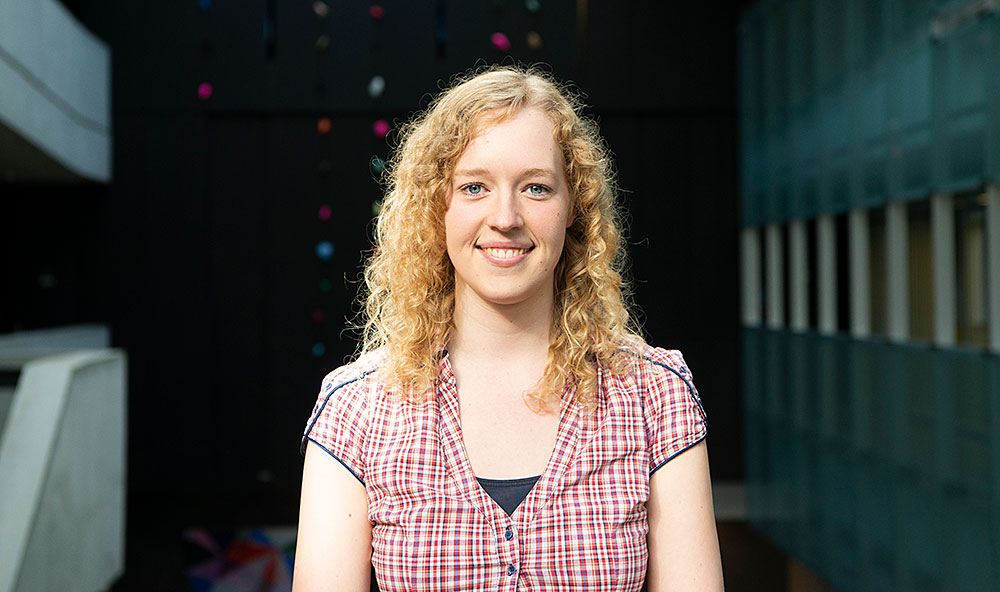 Lena Funcke, a recipient of the Leona Woods Distinguished Postdoctoral Lectureship Award, will discuss her work at the intersection of fundamental particles, the cosmos, and quantum computing in two virtual lectures. (Credit: Perimeter Institute)

UPTON, NY—Lena Funcke, a theoretical physicist who conducts research at the intersection of fundamental particles, the cosmos, and quantum computing, has been named a recipient of the Leona Woods Distinguished Postdoctoral Lectureship Award by the Physics Department at the U.S. Department of Energy’s Brookhaven National Laboratory. Currently working as a postdoctoral fellow at the Perimeter Institute in Waterloo, Canada, she will receive an honorarium of $1,000 and will give a virtual general-interest colloquium and technical talk about her work on Thursday, March 25, and Friday, March 26, respectively.

The Leona Woods award was established in honor of renowned physicist Leona Woods to celebrate the scientific accomplishments of outstanding female physicists and physicists from other under-represented minority groups, including the LGBTQ community—and to promote diversity and inclusion in the department.

“I am very honored to receive this award,” said Funcke. “Leona Woods was an outstanding scientist in many ways, and her life is very inspiring for me. She worked on an amazingly broad range of research topics, from nuclear physics to cosmology to climate change. In line with her interdisciplinary spirit, I’ve recently joined a new research field at the intersection between particle physics, nuclear physics, and quantum computing—which Brookhaven Lab is pioneering. I am therefore very excited that the Leona Woods award now gives me the opportunity to virtually visit Brookhaven and establish new collaborations in this field."

Funcke’s research focuses on two complementary approaches to tackling fundamental open problems of the Standard Model of particle physics. While this model is well tested, it only provides an incomplete understanding of the particles that make up our world and the forces through which they interact.

“There are some fundamental discrepancies between theoretical predictions of the Standard Model and experimental observations,” Funcke said.

One example is the Standard Model prediction that neutrinos—elusive particles produced in nuclear reactions that power our sun and other stars—should have no masses. Yet physicists have determined through careful experiments that neutrinos do have tiny masses. Funcke’s Ph.D. thesis, developed in collaboration with her advisor, Gia Dvali, sought to build a model that went beyond the Standard Model to explain these masses.

“It’s a unique approach, because other models usually predict neutrino masses to arise shortly after the Big Bang,” Funcke said. “In our model, neutrinos masses only appear in the very late Universe. If the model is true, this could have far-reaching implications for our understanding of the recent evolution of the Universe.”

The work may have relevance for understanding so-called dark energy, which makes up most of the content of the Universe. It may also help address another important problem of the Standard Model that relates to the strong-force interactions among quarks, the fundamental building blocks of visible matter.

Upcoming experiments in Antarctica and in outer space will soon test the predictions of Funcke’s model, which she will describe in her colloquium.

The mathematical techniques used to explore these fundamental physics questions also have relevance for the emerging field of quantum computing. In turn, there is hope that quantum computing will help tackle open challenges in nuclear physics, particle physics, and cosmology.

“Quantum computers have the potential to outperform classical computers in a variety of tasks ranging from combinatorial optimization to machine learning to performing physics computations that are not accessible by classical computers. But current intermediate-scale quantum devices still suffer from a considerable level of noise,” she said.

In her technical talk, Funcke will describe a method she has developed to mitigate quantum computers’ readout errors.

“We have implemented the method on IBM quantum hardware, which reduces the readout error by up to one order of magnitude,” she said. “We hope this method will bring us a step closer to exploring physical phenomena on noisy quantum devices.”

“Lena Funcke is an outstanding early career theoretical physicist,” said Raju Venugopalan, leader of Brookhaven’s Nuclear Theory Group, which will serve as Funcke’s host. “We are delighted to have the opportunity to host this virtual visit and hope to host an in-person visit by her in the future,” he said.

The Leona Woods Distinguished Postdoctoral Lectureship Award, established in 2017, is named for Leona Woods, one of a small number of female physicists who contributed to the Manhattan Project, who later served as a visiting physicist at Brookhaven Lab from 1958 to 1962. Leona Woods Lectureship awardees will be selected twice a year. Nominees must be within seven years of earning their doctoral degree and have achievements in broadly defined areas of interest to the Brookhaven Lab Physics Department. These include astrophysics, cosmology, and experimental and theoretical nuclear and high-energy physics. To submit nominations, please contact Peter Steinberg (Chair, Leona Woods Lecture Committee), peter.steinberg@bnl.gov.