The following news release, issued by Paul Scherrer Institut (PSI), describes research just published in Nature Communications. Scientists studied at the micro- and nanoscale how load-bearing shells of brachiopods (marine animals) dynamically adapt their mechanical properties in response to environmental changes, switching within minutes from hard and stiff when dry to soft and flexible upon absorbing water. Through the Center for Functional Nanomaterials (CFN) partner user program with the Complex Materials Scattering (CMS) beamline at the National Synchrotron Light Source II (NSLS-II), CFN materials scientist Esther Tsai and CMS beamline scientist Ruipeng Li collected wide-angle x-ray scattering measurements on brachiopod shells in hydrated and dried states. These measurements enabled the team to characterize changes in the organization and orientation of the shells’ building blocks as a function of hydration. Understanding how these changes endow the shells with their mechanical adaptability will help materials scientists design and synthesize new stimuli-responsive materials. Both the CFN and NSLS-II are U.S. Department of Energy Office of Science User Facilities located at Brookhaven National Laboratory. The CMS beamline is available to CFN users through the CFN Advanced UV and X-ray Probes Facility. General access to the CMS beamline and all other beamlines at NSLS-II is granted through a peer-reviewed proposal system. CFN media contact: Ariana Manglaviti, 631-344-2347, amanglaviti@bnl.gov | NSLS-II media contact: Cara Laasch, 631-344-8458, laasch@bnl.gov | PSI media contact: Brigitte Osterath, +41 56 310 39 57, brigitte.osterath@psi.ch.

The Mystery of the Flexible Shell

An international research team with participation of the Paul Scherrer Institute (PSI) has revealed a secret about a marine animal's shell: The researchers have deciphered why the protective cover of the brachiopod Discinisca tenuis becomes extremely soft in water and gets hard again in the air. The study appears today in the journal Nature Communications. 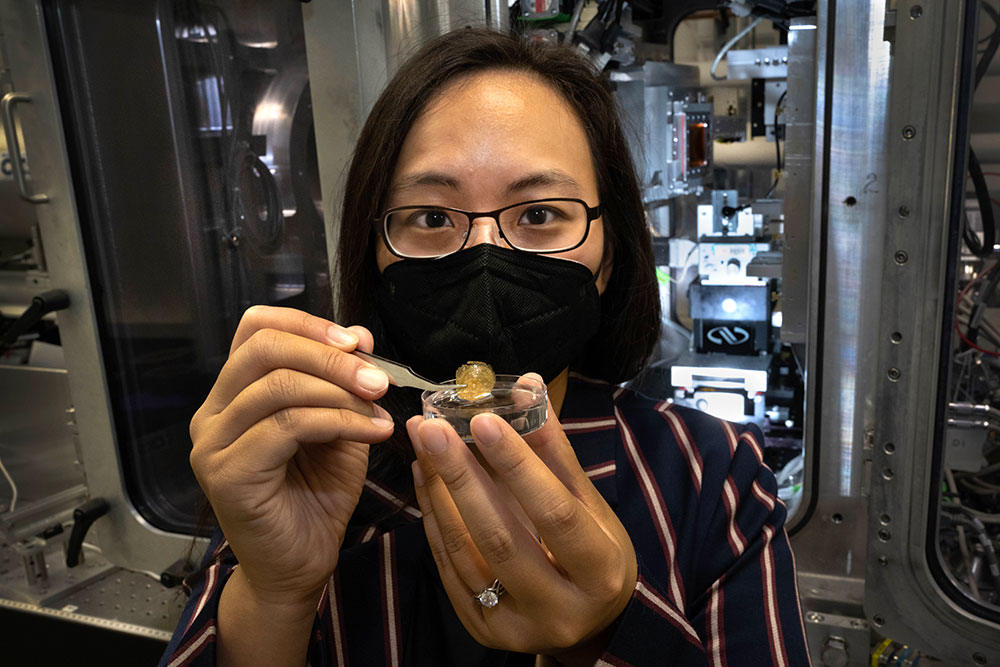 Materials scientist Esther Tsai of the Center for Functional Nanomaterials lifts a brachiopod shell out of a petri dish filled with water. Through x-ray scattering studies at the Complex Materials Scattering beamline at the National Synchrotron Light Source II (background), Tsai characterized the structure of dry and wet brachiopod shells.

The brachiopod Discinisca tenuis lives on the west coast of Africa. Like clams and other bivalves, it has a mineral-rich shell that protects it from harmful environmental influences. Bathing the shell in water leads to a structural change in the material: The flat, hard shell becomes so flexible that it can even be folded up without breaking. With the help of the Swiss Light Source (SLS), the researchers have deciphered exactly how this transformation takes place.

The phenomenon was discovered by chance a few years ago by Fabio Nudelman, a materials chemist currently at the School of Chemistry, University of Edinburgh in Scotland. Maggie Cusack, who was recently appointed president of Munster Technological University in Ireland, had provided Nudelman with shells of the brachiopod Discinisca tenuis, which originally came from Namibia. When he wanted to wash the hard object, it suddenly became soft and flexible in contact with water. The shell had absorbed liquid and thereby changed its structure. The process was reversible: When the shell dried, it became hard and brittle again.

Together with colleagues from six countries, Nudelman set out to discover what exactly takes place during this unexpected transformation. "In its composition, the shell resembles bone," he explains. "But bone doesn't change its structure when it gets wet." The same goes for clams: If the animals need to adapt the properties of their shell to different environmental conditions, they normally have to rework the material in a lengthy and energetically costly process, by resorbing and redistributing minerals. It doesn't work simply through the absorption of water.

Hybrid material with a special trick 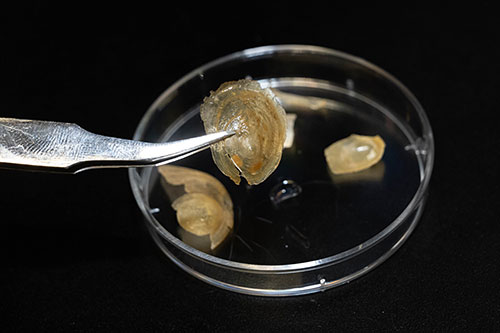 The shell of the brachiopod Discinisca tenuis is hard and brittle but becomes soft and flexible when exposed to water. (Photo: Brookhaven National Laboratory)

It was so-called cryo-tomography, performed at the Swiss Light Source (SLS), that "opened the door to reveal the secret," says Johannes Ihli, a PSI researcher at SLS. With this technique, the researchers examined the material as if under a very high-resolution microscope, and in fact at extremely low temperatures. "At room temperature it would not have been possible, since the high-energy X-ray light would immediately alter the sensitive shell structure," Ihli explains.

The brachiopod's shell, which is no more than half a millimetre thick, consists of a hybrid material: mainly inorganic mineral in which organic polymers made from proteins and sugars are embedded. Bones, clam shells, and teeth are structured in a similar way. The mineral that constitutes the main component of the shell is a type of fluoroapatite – similar to the material that makes up the enamel of our teeth.

Tiny nanocrystals of this material are arranged in layers. Nudelman compares it to brick walls: "In this analogy, the bricks are the nanocrystals, and the mortar between the bricks consists of organic molecules such as chitin and proteins." As the researchers observed, this "mortar" can absorb large amounts of water, causing it to swell up. Through the storage of water, it changes its structure: It becomes soft, and the bricks become movable with respect to each other. "Then water acts like a lubricant between the individual nanocrystals," Ihli explains. "The crystals can then slip against each other." Through this movement, the shell becomes flexible. The researchers found a network of pores in the shell that was especially effective in guiding water inside and rapidly distributing it throughout the material. 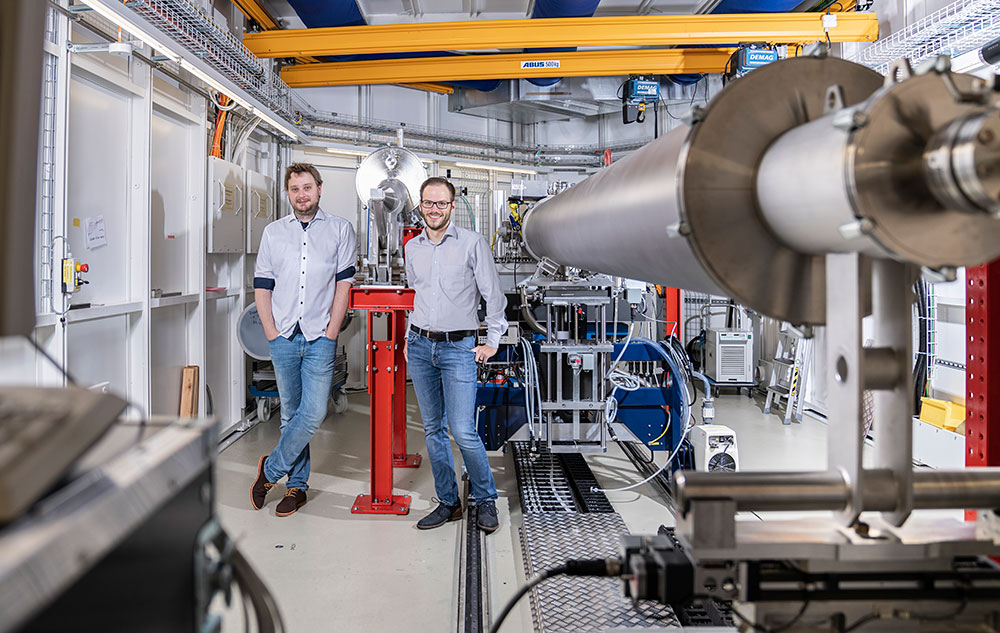 Discinisca tenuis lives in large clusters in tidal zones on the coast where, depending on the tide, the animals are exposed to strong waves or calm waters. The researchers speculate that it is probably advantageous if the animals can quickly adapt the softness or hardness of their shell to the respective situation: "This could prevent damage to the shell and thus be a key to the animals' survival," they write in the study. The phenomenon may even be more widespread than suspected: "We don't know how many other animal species there might be that have this kind of property," says Nudelman.

Aside from biology and evolution, the newly gained insights are also of interest for materials science: The development of a hard, brittle material whose stiffness can be controlled could hold promise for many applications. Sports clothing or helmets, for example, might be able to flexibly adapt to movements and always offer the protection required depending on the impact. Harnessing this phenomenon could also prove useful in developing bone-replacement materials.