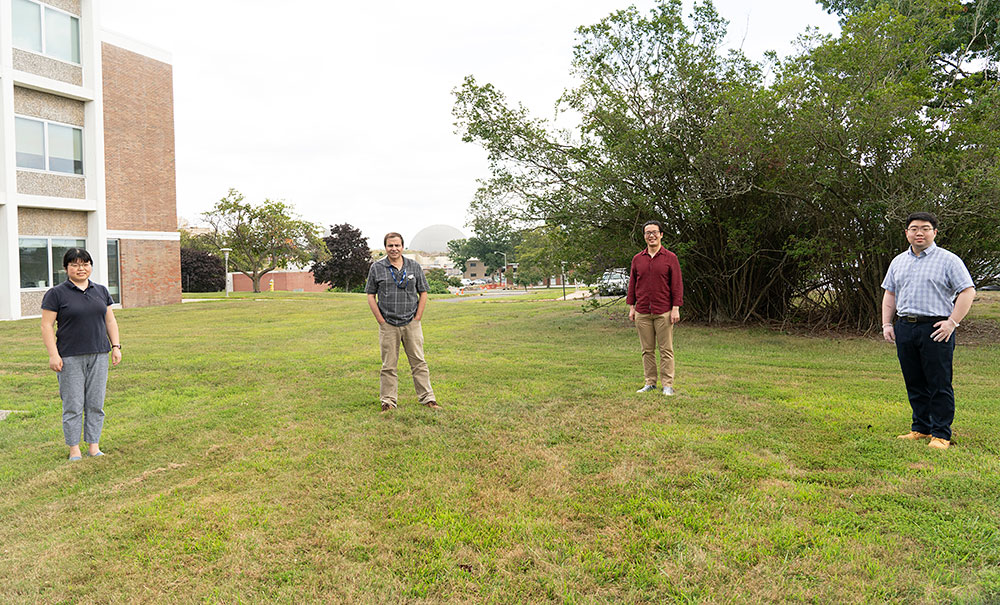 UPTON, NY – An international collaboration of scientists has taken a significant step toward the realization of a nearly “green” zero-net-carbon technology that will efficiently convert carbon dioxide, a major greenhouse gas, and hydrogen into ethanol, which is useful as a fuel and has many other chemical applications. The study reports a “roadmap” for successfully navigating this challenging reaction and provides a picture of the full reaction sequence using theoretical modeling and experimental characterization.

Led by the U.S. Department of Energy’s (DOE) Brookhaven National Laboratory, the group determined that bringing cesium, copper, and zinc oxide together into a close-contact configuration catalyzes a reaction pathway that transforms carbon dioxide (CO2) into ethanol (C2H6O). They also discovered why this three-part interface is successful. The study, which is described in a paper in the July 23 online edition of the Journal of the American Chemical Society and is featured on the publication’s cover, will drive further research into how to develop a practical industrial catalyst for selectively converting CO2 into ethanol. Such processes will lead to technologies that are able to recycle CO2 emitted from combustion and convert it into usable chemicals or fuels.

None of the three components examined in the study is able to individually catalyze the CO2-to-ethanol conversion, nor can they in pairs. But when the trio is brought together in a certain configuration, the region where they meet opens a new route for the carbon-carbon bond formation that makes the conversion of CO2 to ethanol possible. The key to this is the well-tuned interplay between the cesium, copper, and zinc oxide sites.

“There has been much work on carbon dioxide conversion to methanol, yet ethanol has many advantages over methanol. As a fuel, ethanol is safer and more potent. But its synthesis is very challenging due to the complexity of the reaction and the difficulty of controlling C-C bond formation,” said the study’s corresponding researcher, Brookhaven chemist Ping Liu. “We now know what kind of configuration is necessary to make the transformation, and the roles that each component plays during the reaction. It is a big breakthrough.”

The interface is formed by depositing tiny amounts of copper and cesium onto a surface of zinc oxide. To study the regions where the three materials meet, the group turned to an x-ray technique called in x-ray photoemission spectroscopy, which showed a likely change in the reaction mechanism for CO2 hydrogenation when cesium was added. More details were revealed using two widely used theoretical approaches: “density functional theory” calculations, a computational modelling method to investigate the structures of materials, and “kinetic Monte Carlo simulation,” computer simulation to simulate the reaction kinetics. For this work, the group utilized the computing resources of Brookhaven’s Center for Functional Nanomaterials and Lawrence Berkeley National Laboratory’s National Energy Research Scientific Computing Center, both DOE Office of Science User Facilities.

One of the things they learned from the modeling is that the cesium is a vital component of the active system. Without its presence, ethanol cannot be made. In addition, good coordination with copper and zinc oxide is also important. But there is much more to learn.

“There are many challenges to overcome before arriving at an industrial process that can turn carbon dioxide into usable ethanol,” said Brookhaven chemist José Rodriguez, who participated in the work. “For example, there needs to be a clear way to improve the selectivity towards ethanol production. A key issue is to understand the link between the nature of the catalyst and the reaction mechanism; this study is on the front lines of that effort. We are aiming for a fundamental understanding of the process.”

Another goal of this area of research is to find an ideal catalyst for CO2 conversion to “higher” alcohols, which have two or more carbon atoms (ethanol has two) and are, therefore, more useful and desirable for industrial applications and the production of commodity goods. The catalyst studied in this work is advantageous because copper and zinc oxide-based catalysts are already widespread in the chemical industry and utilized in catalytic processes such as methanol synthesis from CO2.

The researchers have planned follow-up studies at Brookhaven’s National Synchrotron Light Source II, also a DOE Office of Science User Facility, which offers a unique suite of tools and techniques for the characterization of catalysts under working conditions. There, they will investigate in more detail the Cu-Cs-ZnO system and catalysts with a different composition.