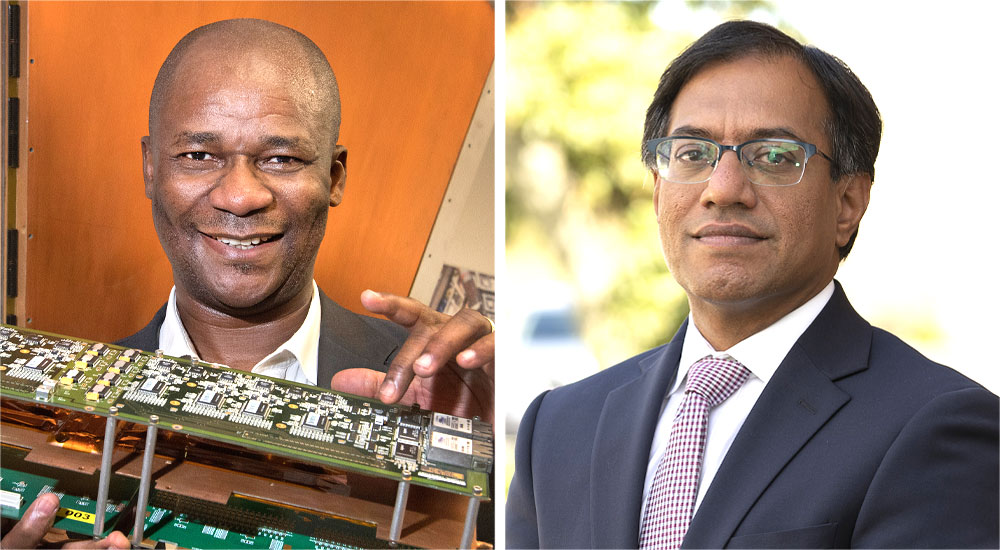 UPTON, NY—The American Physical Society (APS) has elected two scientists from the U.S. Department of Energy’s (DOE) Brookhaven National Laboratory as 2021 APS fellows. With more than 45,000 members from academia, government, and industry, APS seeks to advance and share physics knowledge through research journals, scientific meetings, and activities in education, outreach, and advocacy. Each year, a very small percentage of APS members are elevated to the status of fellow through a nomination and selection process. Fellows are recognized for their exceptional contributions to physics, including in research, applications, leadership and service, and education. 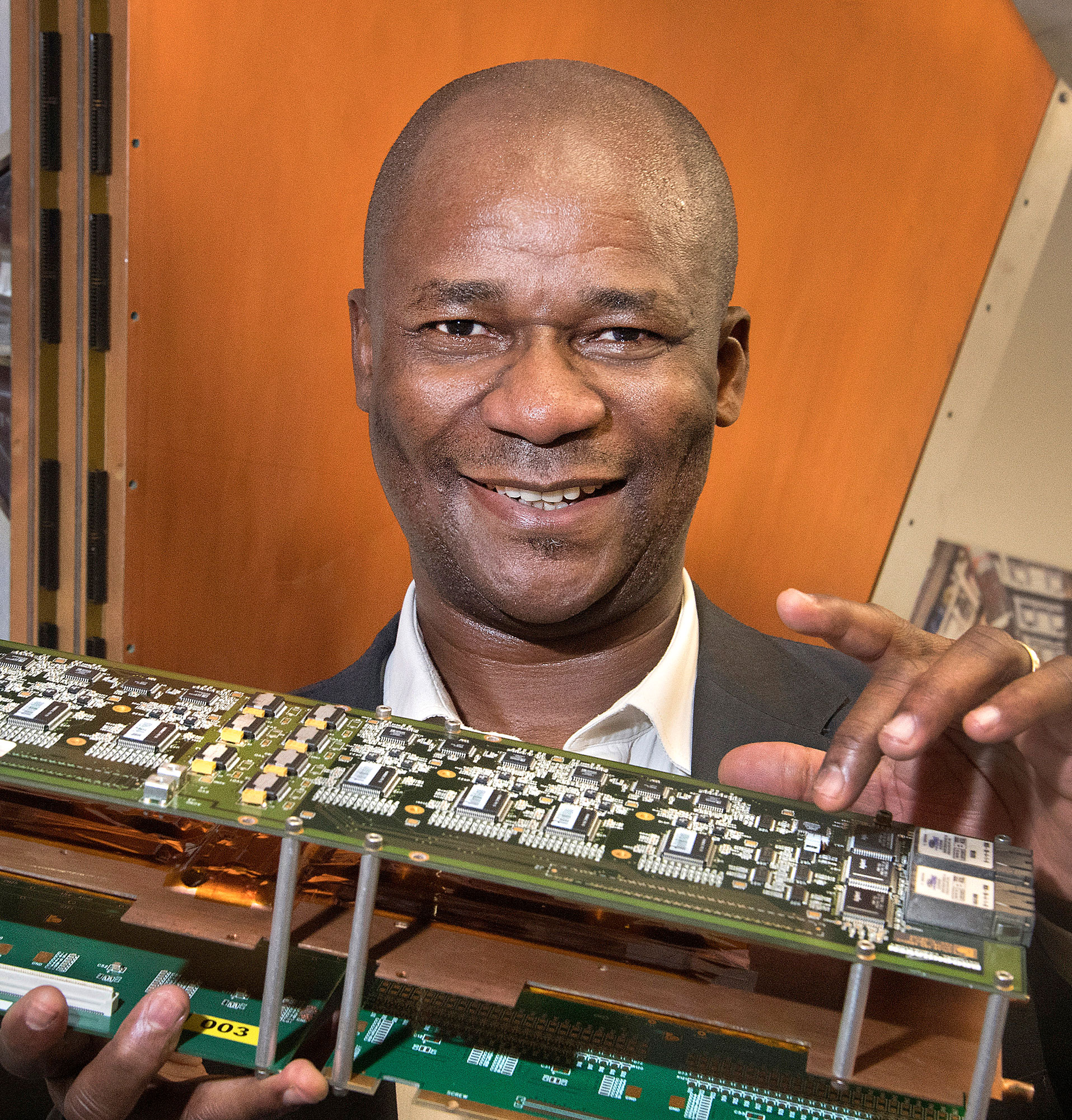 Brookhaven Lab particle physics experimentalist Kétévi Adiklè Assamagan is being honored “for significant contributions to experimental studies of the Standard Model Higgs boson and the search for new phenomena beyond the Standard Model using the Higgs boson as a tool, and for leading physics outreach in Africa including founding the African School of Fundamental Physics and Applications.”

As member of the ATLAS Collaboration of the Large Hadron Collider (LHC)—the world’s largest particle collider, located at the European Center for Nuclear Research (CERN)—Assamagan was on the front lines leading up to the 2012 discovery of the Higgs boson. He led a group that prepared the framework for ATLAS computing software and methodology used to analyze LHC collision data.

The Higgs discovery filled in the last predicted particle of physicists’ Standard Model of particle physics, validating the case for how the Higgs boson helps to generate the masses of all fundamental particles. But even complete, the Standard Model leaves many questions still to be explored—including the nature of dark matter, the matter/antimatter imbalance in the universe, and the role of gravity in the subatomic world. Assamagan has been scouring LHC data for clues. He is interested in discovering how the fundamental interactions between matter and forces make the universe what it is now—and what “new physics” may lie beyond our current Standard Model understanding using the recently discovered Higgs boson as a tool.

Assamagan has also been a champion for bringing young people from Africa into the field of fundamental physics. In 2010, with support from Brookhaven, CERN, and a host of other U.S. and international research institutions, he helped to establish the African School of Fundamental Physics and Applications. The outreach program is held every two years in a different African nation, serving ~70 graduate level students out of hundreds of applicants. It also provides programs for local high school students and teachers and facilitates interactions with industry and government representatives as well. Participants learn about nuclear and particle physics theory; the computational tools used for experiments, data analysis, and simulations; the latest experimental programs, including detector designs and construction; as well as the application of fundamental physics knowledge and technology in fields such as medicine, clean energy, and nanotechnology. Since 2019, the DOE Office of High Energy Physics has provided direct funding to Brookhaven Lab in support of the School and the associated activities.

“I feel honored and humbled to be named an APS Fellow,” Assamagan said. “I appreciate the support that I have received from Brookhaven Lab in my professional growth. This recognition will serve to further develop physics education and outreach towards Africa, and it will encourage research collaborations with African physicists.”

Assamagan was born in Gabon, Central Africa, and grew up in Togo, West Africa. He attended the University of Lomé (formerly Université du Bénin) and continued his education at Indiana’s Ball State University and the University of Virginia, where he earned a Ph.D. in nuclear and particle physics in 1995. He held appointments and other positions at CERN, the Saclay Nuclear Research Centre in France, the University of Johannesburg in South Africa, Hampton University, and Thomas Jefferson National Accelerator Facility before joining Brookhaven’s Physics Department in 2001. Assamagan is a member of Brookhaven Lab’s African American Affinity Group. In 2019, he was elected Fellow of the African Academy of Sciences, and earlier this year, Fellow of the South African Institute of Physics.

Brookhaven Lab nuclear physics theorist Swagato Mukherjee is being recognized “for seminal work employing ab initio lattice quantum chromodynamics (QCD) to uncover fundamental information on the QCD phase diagram at finite temperatures and baryon density, and for the creative use of these methods to provide limits on the location of the critical point in heavy-ion collisions."

Mukherjee’s work explores the interactions of quarks and gluons, the fundamental building blocks that make up protons and neutrons of atomic nuclei. These interactions are governed by the strongest force in nature and described by a physics theory called quantum chromodynamics (QCD). The equations that make up QCD are extremely complex, involving billions of variables. To make such complex problems manageable, Mukherjee and his theorist colleagues use powerful supercomputers to represent the particles on a four-dimensional imaginary lattice—a stepwise grid made of three spatial dimensions plus time. The simulations explore all possible interactions of each particle with each of its adjacent neighbors, and how those interactions might ripple through the lattice over time.

The complex calculations allow physicists to model how the particle interactions change over different experimental conditions at the Relativistic Heavy Ion Collider (RHIC). RHIC, a DOE Office of Science user facility for nuclear physics research, collides the nuclei of heavy atoms such as gold to recreate the conditions of the early universe, before protons and neutrons existed. By feeding data from RHIC’s particle collisions into the models, Mukherjee can explore whether quarks and gluons are bound within protons or other composite particles, or free in their early-universe deconfined state, known as a quark-gluon plasma. He can also map out the transitions between these phases of matter—and help identify the conditions where physicists might find a so-called “critical point,” where the nature of transition between the two phases itself changes.

The complexity of the calculations grows as the questions scientists seek to answer require simulations of quark and gluon interactions on smaller and smaller scales, and under the fluctuating conditions expected near the QCD critical point. Mukherjee has been leading an effort to develop the next generation of computational tools to enable these calculations and push the field forward. Software and workflow management systems developed by his team are designed to exploit the diverse and continually evolving architectures of DOE’s Leadership Computing Facilities—some of the most powerful supercomputers and fastest data-sharing networks in the world. These tools will ultimately benefit nuclear research facilities across the DOE complex, and potentially other fields of science as well.

“I feel truly humbled to receive this recognition,” Mukherjee said. “This honor is only made possible by the privilege I have of working with outstanding scientific collaborators and the supportive research environment of Brookhaven Lab. I would especially like to thank the present and former members of the Lab’s Nuclear Theory group for creating a stimulating scientific environment and for providing unconditional professional support throughout my time at Brookhaven. I only hope to pass these kinds of opportunities forward to the next generations of scientists.”

Swagato Mukherjee was born and raised in India. He earned his B.S. and M.S., both in physics, from Calcutta University in 1999 and 2001, respectively. He went on to study theoretical physics at the Tata Institute of Fundamental Research in Mumbai, earning his Ph.D. in 2007. He joined Brookhaven Lab as a postdoctoral associate in 2009, was hired as an assistant physicist in 2010, and has been a physicist with tenure since 2016. He has been a principal investigator and co-author on a wide range of studies, organizer of conferences and workshops, and has given nearly 100 invited talks about his work. In addition, he serves on a range of committees to guide and review research, including the Executive Committee of the USQCD collaboration.

Brookhaven Lab’s research in nuclear and high-energy physics and operations at RHIC are all funded primarily through the DOE Office of Science.