Zhoudunming Tu explains the science of exploring gluon distributions and deuteron breakup in ultra-peripheral collisions of deuterons and gold ions while speaking with a group of students at Princeton University. Credit: Yingshi Peng, Princeton

UPTON, NY — Scientists have found a new way to “see” inside the simplest atomic nuclei to better understand the “glue” that holds the building blocks of matter together. The results, just published in Physical Review Letters, come from collisions of photons (particles of light) with deuterons, the simplest atomic nuclei (made of just one proton bound to one neutron).

The collisions took place at the Relativistic Heavy Ion Collider (RHIC), a U.S. Department of Energy (DOE) Office of Science user facility for nuclear physics research at DOE’s Brookhaven National Laboratory. Scientists from around the world analyze data from RHIC’s subatomic smashups to gain insight into the particles and forces that build up the visible matter of our world.

In these particular collisions, the photons acted somewhat like an x-ray beam to provide the first glimpse of how particles called gluons are arranged within the deuteron.

*The strong force is the strongest of the four fundamental forces in nature (strong, weak, electromagnetic, and gravitational force). And unlike any of the other forces, the interaction strength becomes larger with increasing distance. The binding force between two quarks at a distance beyond 10-15 meters (any farther than a millionth of a billionth of a meter) is more than 10 tons!

“The gluon is very mysterious,” said Brookhaven Lab physicist Zhoudunming Tu, who led this project for RHIC’s STAR Collaboration. Gluons, as “carriers” of the strong force,* are the glue that binds quarks, the inner building blocks of protons and neutrons. They also hold protons and neutrons together to form atomic nuclei. “We want to study the gluon distribution because it’s one of the keys that binds the quarks together. This measurement of gluon distribution in a deuteron has never been done before.”

In addition, because the photon-deuteron collisions sometimes break the deuterons apart, the collisions can help scientists understand this process.

“Measuring the breakup of the deuteron tells us a lot about the basic mechanisms that hold these particles together in nuclei in general,” said Tu.

Understanding gluons and their role in nuclear matter will be a central focus of research at the Electron-Ion Collider (EIC), a future nuclear physics research facility in the planning stages at Brookhaven Lab. At EIC, physicists will use photons generated by electrons to probe gluon distributions inside protons and nuclei, as well as the force that holds nuclei together. But Tu, who has been developing plans for research at the EIC, realized he might get some clues by looking at existing data from RHIC’s 2016 experiments on deuterons.

“The motivation for studying the deuteron is because it is simple, but it still has everything a complex nucleus has,” Tu explained. “We want to study the simplest case of a nucleus to understand these dynamics—including how they change as you move from a simple proton to the more complex nuclei we’ll study at the EIC.”

So, he started sifting through data collected by STAR from hundreds of millions of collisions in 2016.

“The data were there. Nobody had looked into the deuteron’s gluon distribution until I started when I was a Goldhaber Fellow in 2018. I had just joined Brookhaven, and I found this connection to the EIC.” 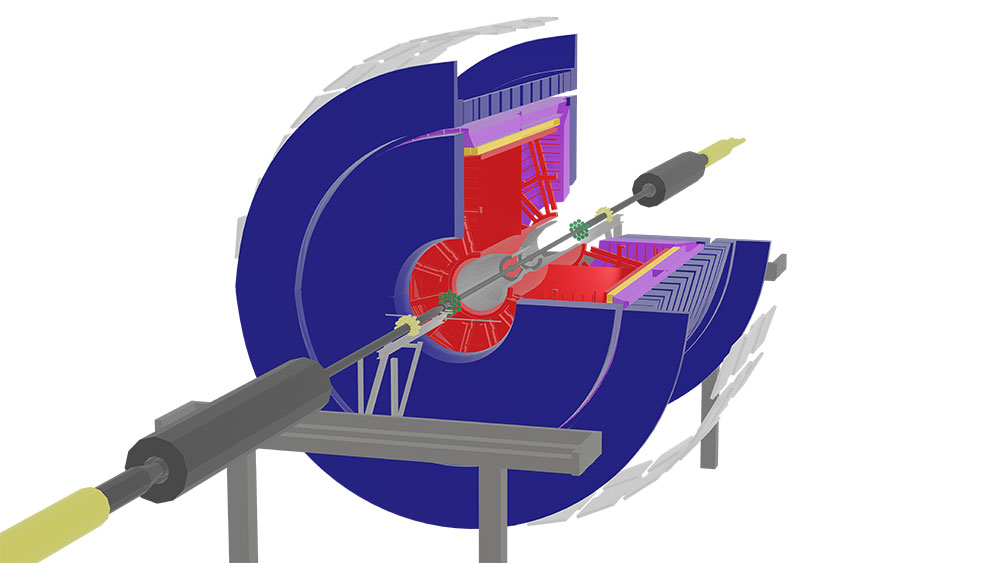 An end-on view of the barrel-shaped STAR detector. For this study, scientists tracked the decay products of a Jpsi particle created in ultraperipheral collisions between deuterons and gold ions at the center of the barrel. In addition, they tracked "spectator neutrons" that struck detectors at one end of the barrel when deuterons broke up into a single proton and neutron.

RHIC can accelerate a wide range of ions—atomic nuclei stripped of their electrons. It can even send beams of two different kinds of particles speeding in opposite directions through the twin rings of its 2.4-mile circular racetrack at nearly the speed of light. But it can’t accelerate photons directly.

But thanks to physics, recently covered here, fast-moving particles with a lot of positive charge emit their own light. So, in 2016, when RHIC was colliding deuterons with highly charged gold ions, those speeding gold ions were surrounded by clouds of photons. By identifying “ultra-peripheral collisions”—where the deuteron just glances by a gold ion’s cloud of photons—Tu realized he could study photons interacting with deuterons to get a glimpse inside.

The telltale sign of those interactions is the production of a particle called J/psi, triggered by the photon interacting with gluons inside the deuteron.

“I found 350 J/psi. There are only 350 events out of the hundreds of millions of collisions recorded by the STAR experiment. It is actually a very rare event,” Tu said. 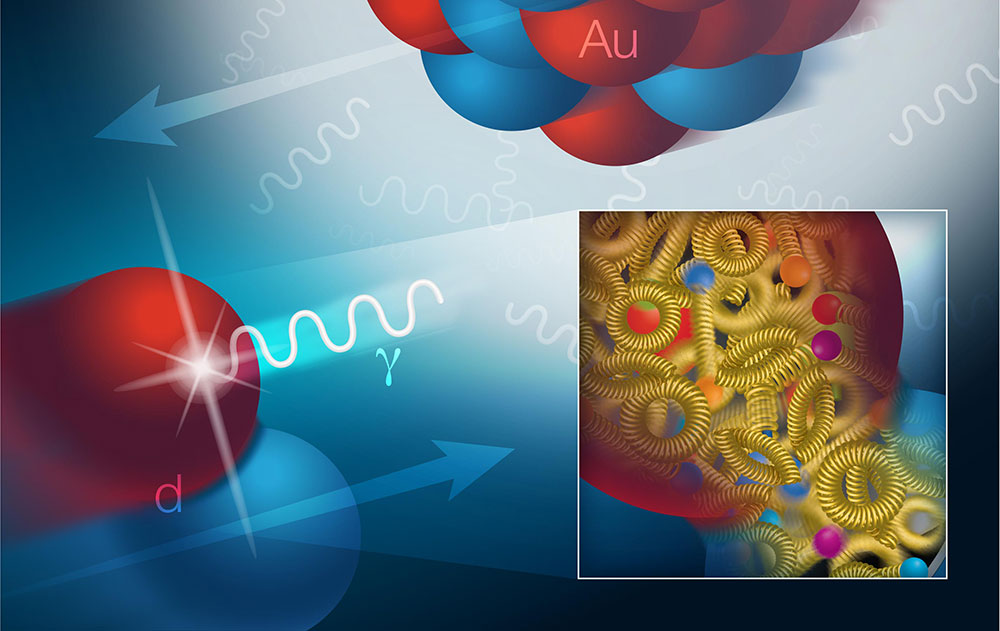 Mapping gluon distribution: Ultra-peripheral collisions between gold (Au) ions and deuterons (d) allow scientists to study what happens when photons (white wavy lines, labeled γ), which surround the fast-moving gold ions, interact with gluons (yellow squiggles) within the deuteron. Those interactions give scientists a glimpse of the distribution of gluons within this simplest atomic nucleus (inset).

Though the J/psi quickly decays, the STAR detector can track the decay products to measure how much momentum was transferred from the interaction. Measuring the distribution of momentum transfer across all the collisions allows scientists to infer the gluon distribution.

“There is a one-to-one connection between the momentum transfer (the ‘kick’ given to the J/psi) and where the gluon is located in the deuteron,” Tu explained. “On average, gluons inside the very core of the deuteron give a very large momentum kick. Gluons on the periphery give a smaller kick. So, looking at the overall momentum distribution can be used to map out the gluon distribution in the deuteron.”

“The findings from our study have filled a gap in our understanding of gluon dynamics between a free proton and a heavy nucleus,” said Shuai Yang, a STAR collaborator from South China Normal University. Yang has been a leading physicist in the use of light emitted by fast-moving ions to study the properties of nuclear matter in ultra-peripheral nucleus-nucleus collisions at RHIC and at Europe’s Large Hadron Collider (LHC). “This work builds a bridge connecting particle physics and nuclear physics,” he said.

Another leading contributor, William Schmidke of Brookhaven Lab, said, “In fact we have been studying this process for many years. But this is the first result that tells us the gluon dynamics for both individual nucleons (the collective term for protons and neutrons) and the nucleus in the same system.”

In addition to generating a J/psi particle, each photon-gluon interaction also gives a momentum kick that deflects the deuteron—or breaks that simple nucleus apart into a proton and neutron. Studying the breakup process gives insight into the gluon-generated force that holds nuclei together.

In the case of a breakup, the positively charged proton curves away in the magnetic field of the RHIC accelerator. But the neutral neutron keeps moving straight ahead. To capture these “spectator neutrons,” STAR has a detector positioned 18 meters away from its center right along the beamline at one end.

“This process is very simple,” Tu noted. “Only one J/psi gets produced in the center of STAR. The only other particles that can be created are from this deuteron breakup. So, any time you get a neutron, you know this is coming from the deuteron breakup. The STAR detector can unambiguously measure this process at high energy.” 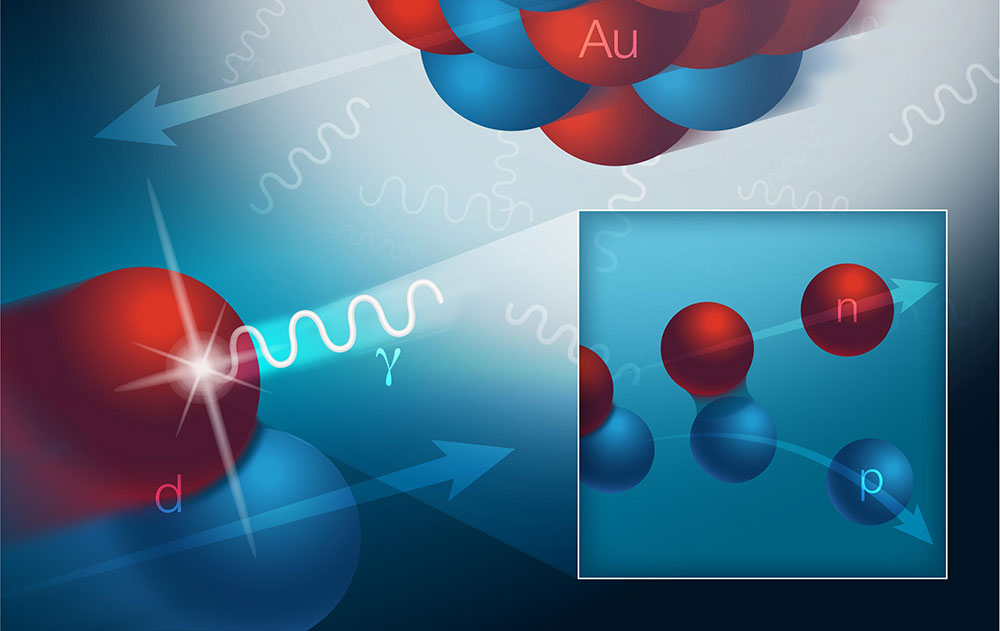 Tracking deuteron breakup: In ultra-peripheral collisions between gold (Au) ions and deuterons (d), photons (white wavy lines, labeled γ) surrounding the fast-moving gold (Au) ions can sometimes give deuterons a strong enough "kick" to break the deuteron's proton (p) and neutron (n) apart. The positively charged proton curves away in the magnetic field, but scientists can track the "spectator neutron" to study the role of photon-gluon interactions in deuteron breakup.

“At high energy, the photon ‘sees’ almost nothing but gluons inside the deuteron,” Tu said. “After the gluons ‘kick’ the J/psi particle, how this ‘kick’ leads to a breakup is very likely related to the gluon dynamics between the proton and neutron. The advantage of this measurement is that we can experimentally identify the gluon-dominated channel and the nuclear breakup at the same time.”

In addition, Tu notes that measuring neutrons produced via nuclear breakup—generally known as “spectator tagging”—is a broad and useful technique and will definitely be used at the future EIC.

But at the EIC, “the instrumentation will be much better and will have more coverage,” he explained. “We’ll be able to further improve the precision of gluon spatial distribution measurements from light nuclei to heavy nuclei. And EIC detector systems will capture almost everything about the nucleus breakup, so we can study in even more detail how nucleons interact with each other.”

Brookhaven Lab’s role in this work and RHIC operations are funded by the DOE Office of Science (NP). Additional funding came from the U.S. National Science Foundation and a range of international funding agencies listed in the scientific paper. The STAR team used computing resources at the RHIC and ATLAS Computing Facility at Brookhaven Lab, the National Energy Research Scientific Computing Center, a DOE Office of Science user facility at Lawrence Berkeley National Laboratory, and the Open Science Grid Consortium.