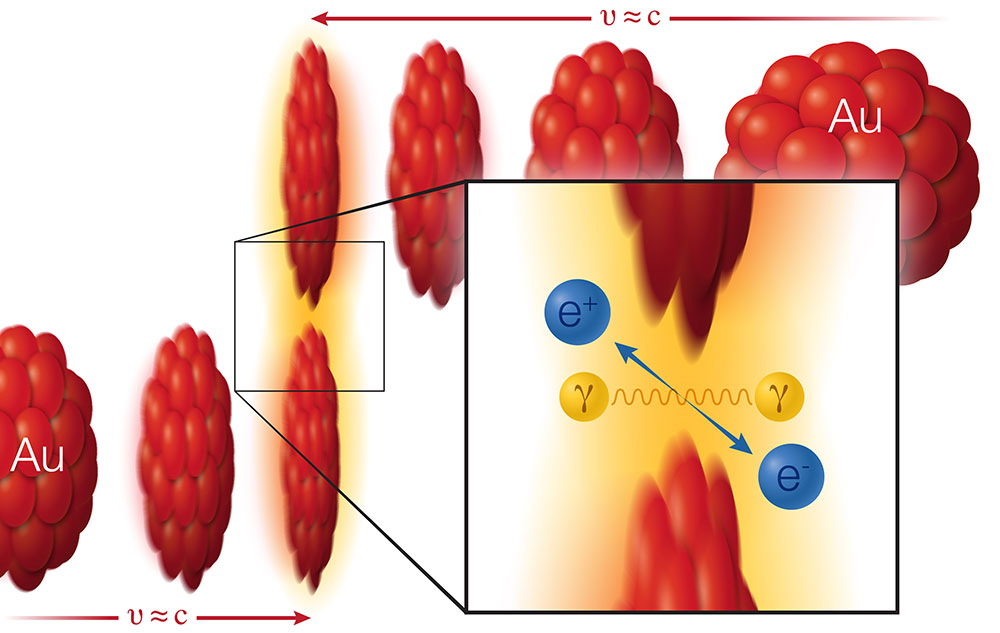 Making matter from light: Two gold (Au) ions (red) move in opposite direction at 99.995% of the speed of light (v, for velocity, = approximately c, the speed of light). As the ions pass one another without colliding, two photons (γ) from the electromagnetic cloud surrounding the ions can interact with each other to create a matter-antimatter pair: an electron (e-) and positron (e+).

UPTON, NY—Scientists studying particle collisions at the Relativistic Heavy Ion Collider (RHIC)—a U.S. Department of Energy Office of Science user facility for nuclear physics research at DOE’s Brookhaven National Laboratory—have produced definitive evidence for two physics phenomena predicted more than 80 years ago. The results were derived from a detailed analysis of more than 6,000 pairs of electrons and positrons produced in glancing particle collisions at RHIC and are published in Physical Review Letters.

The primary finding is that pairs of electrons and positrons—particles of matter and antimatter—can be created directly by colliding very energetic photons, which are quantum “packets” of light. This conversion of energetic light into matter is a direct consequence of Einstein’s famous E=mc2 equation, which states that energy and matter (or mass) are interchangeable. Nuclear reactions in the sun and at nuclear power plants regularly convert matter into energy. Now scientists have converted light energy directly into matter in a single step.

The second result shows that the path of light traveling through a magnetic field in a vacuum bends differently depending on how that light is polarized. Such polarization-dependent deflection (known as birefringence) occurs when light travels through certain materials. (This effect is similar to the way wavelength-dependent deflection splits white light into rainbows.) But this is the first demonstration of polarization-dependent light-bending in a vacuum.

Both results depend on the ability of RHIC’s STAR detector—the Solenoid Tracker at RHIC—to measure the angular distribution of particles produced in glancing collisions of gold ions moving at nearly the speed of light. 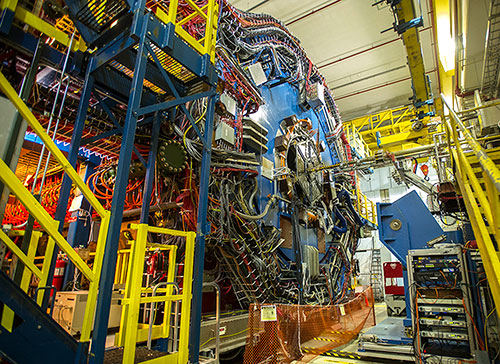 The STAR detector at the Relativistic Heavy Ion Collider measured the angular distribution of particles produced in glancing collisions of gold ions moving at nearly the speed of light to provide evidence for two physics phenomena predicted more than 80 years ago.

Such capabilities didn’t exist when physicists Gregory Breit and John A. Wheeler first described the hypothetical possibility of colliding light particles to create pairs of electrons and their antimatter counterparts, known as positrons, in 1934.

“In their paper, Breit and Wheeler already realized this is almost impossible to do,” said Brookhaven Lab physicist Zhangbu Xu, a member of RHIC’s STAR Collaboration. “Lasers didn’t even exist yet! But Breit and Wheeler proposed an alternative: accelerating heavy ions. And their alternative is exactly what we are doing at RHIC.”

An ion is essentially a naked atom, stripped of its electrons. A gold ion, with 79 protons, carries a powerful positive charge. Accelerating such a charged heavy ion to very high speeds generates a powerful magnetic field that spirals around the speeding particle as it travels—like current flowing through a wire.

“If the speed is high enough, the strength of the circular magnetic field can be equal to the strength of the perpendicular electric field,” Xu said. And that arrangement of perpendicular electric and magnetic fields of equal strength is exactly what a photon is—a quantized “particle” of light. “So, when the ions are moving close to the speed of light, there are a bunch of photons surrounding the gold nucleus, traveling with it like a cloud.”

At RHIC, scientists accelerate gold ions to 99.995% of the speed of light in two accelerator rings.

“We have two clouds of photons moving in opposite directions with enough energy and intensity that when the two ions graze past each other without colliding, those photon fields can interact,” Xu said. 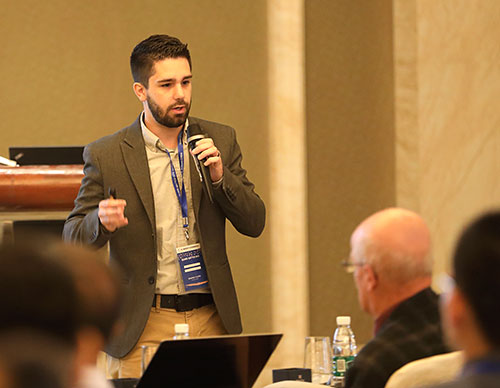 Daniel Brandenburg, a Goldhaber Fellow at Brookhaven Lab, presented the STAR results related to this discovery at the Quark Matter 2019 conference.

STAR physicists tracked the interactions and looked for the predicted electron-positron pairs.

But such particle pairs can be created by a range of processes at RHIC, including through “virtual” photons, a state of photon that exists briefly and carries an effective mass. To be sure the matter-antimatter pairs were coming from real photons, scientists have to demonstrate that the contribution of “virtual” photons does not change the outcome of the experiment.

To do that, the STAR scientists analyzed the angular distribution patterns of each electron relative to its partner positron. These patterns differ for pairs produced by real photon interactions versus virtual photons.

“We also measured all the energy, mass distributions, and quantum numbers of the systems. They are consistent with theory calculations for what would happen with real photons,” said Daniel Brandenburg, a Goldhaber Fellow at Brookhaven Lab, who analyzed the STAR data on this discovery.

Other scientists have tried to create electron-positron pairs from collisions of light using powerful lasers—focused beams of intense light. But the individual photons within those intense beams don’t have enough energy yet, Brandenburg said.

One experiment at the SLAC National Accelerator Laboratory in 1997 succeeded by using a nonlinear process. Scientists there first had to boost the energy of the photons in one laser beam by colliding it with a powerful electron beam. Collisions of the boosted photons with multiple photons simultaneously in an enormous electromagnetic field created by another laser produced matter and antimatter.

“Our results provide clear evidence of direct, one-step creation of matter-antimatter pairs from collisions of light as originally predicted by Breit and Wheeler,” Brandenburg said. “Thanks to RHIC’s high-energy heavy ion beam and the STAR detector’s large acceptance and precision measurements, we are able to analyze all the kinematic distributions with high statistics to determine that the experimental results are indeed consistent with real photon collisions.”

Bending light in a vacuum

STAR’s ability to measure the tiny deflections of electrons and positrons produced almost back-to-back in these events also gave the physicists a way to study how light particles interact with the powerful magnetic fields generated by the accelerated ions.

“The cloud of photons surrounding the gold ions in one of RHIC’s beams is shooting into the strong circular magnetic field produced by the accelerated ions in the other gold beam,” said Chi Yang, a long-time STAR collaborator from Shandong University who spent his entire career studying electron-positron pairs produced from various processes at RHIC. “Looking at the distribution of particles that come out tells us how polarized light interacts with the magnetic field.”

Bending polarized light: This illustration shows how light with different polarization directions (indicated by black arrows) passes through a material along two different paths (yellow beams). This is called the birefringence effect. Results from RHIC provide evidence that birefringence also happens in a magnetic field in a vacuum.

Werner Heisenberg and Hans Heinrich Euler in 1936, and John Toll in the 1950s, predicted that a vacuum of empty space could be polarized by a powerful magnetic field and that such a polarized vacuum should deflect the paths of photons depending on photon polarization. Toll, in his thesis, also detailed how light absorption by a magnetic field depends on polarization and its connection to the refractive index of light in a vacuum. This polarization-dependent deflection, or birefringence, has been observed in many types of crystals. There was also a recent report of the light coming from a neutron star bending this way, presumably because of its interactions with the star’s magnetic field. But no Earth-based experiment has detected birefringence in a vacuum.

At RHIC, the scientists measured how the polarization of the light affected whether the light was “absorbed” by the magnetic field.

This is similar to the way polarized sunglasses block certain rays from passing through if they don’t match the polarization of the lenses, Yang explained. In the case of the sunglasses, in addition to seeing less light get through, you could, in principle, measure an increase in the temperature of the lens material as it absorbs the energy of the blocked light. At RHIC, the absorbed light energy is what creates the electron-positron pairs.

This is the first Earth-based experimental observation that polarization affects the interactions of light with the magnetic field in the vacuum—the vacuum birefringence predicted in 1936.

“Both of these findings build on predictions made by some of the great physicists in the early 20th century,” said Frank Geurts, a professor at Rice University, whose team built and operated the state-of-the-art “Time-of-Flight” detector components of STAR that were necessary for this measurement. “They are based on fundamental measurements made possible only recently with the technologies and analysis techniques we have developed at RHIC.”

Additional contributors to the analyses that led to these results include STAR co-spokesperson Lijuan Ruan of Brookhaven, Shuai Yang of Rice University, Janet Seger of Creighton University, and Wangmei Zha of the University of Science and Technology of China. The scientists made use of computational resources at Brookhaven’s Scientific Data and Computing Center, the National Energy Research Scientific Computing Center (NERSC) at DOE’s Lawrence Berkeley National Laboratory, and the Open Science Grid consortium.

Brookhaven Lab’s role in the work and operations at RHIC are supported by the DOE Office of Science (NP). Additional funders include the U.S. National Science Foundation and a range of international agencies listed in the published paper.