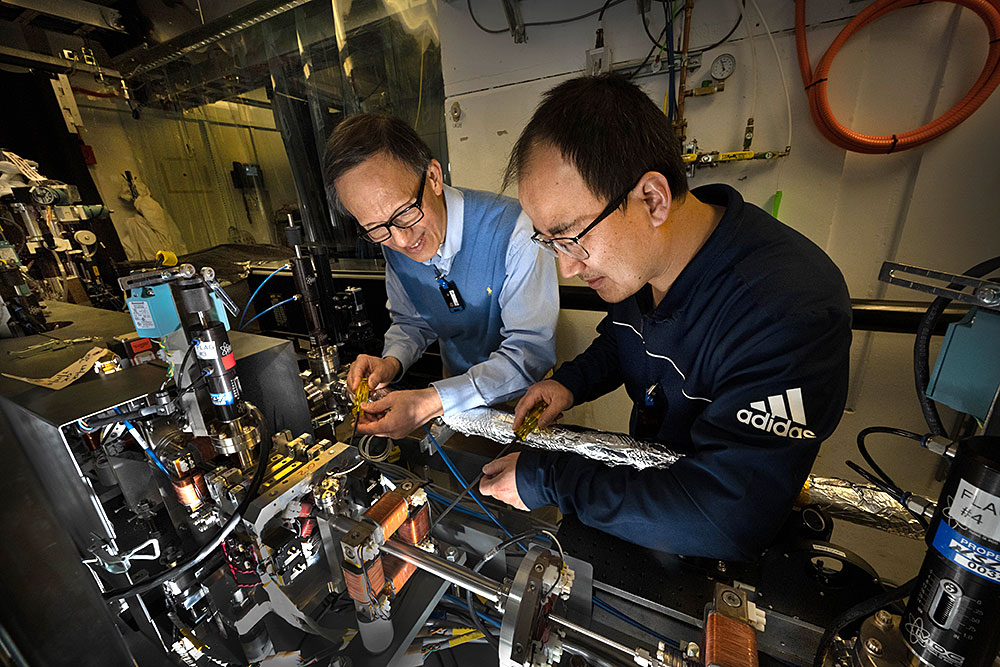 Yimei Zhu and Junjie Li at the 3 MeV ultrafast electron diffraction instrument, which acts like a high-resolution stroboscopic "camera" to track trajectories of atoms.

UPTON, NY—Imagine a computer that can think as fast as the human brain while using very little energy. That’s the goal of scientists seeking to discover or develop materials that can send and process signals as easily as the brain’s neurons and synapses. Identifying quantum materials with an intrinsic ability to switch between two distinct forms (or more) may hold the key to these futuristic sounding “neuromorphic” computing technologies.

In a paper just published in the journal Physical Review X, Yimei Zhu, a physicist at the U.S. Department of Energy’s (DOE) Brookhaven National Laboratory, and his collaborators describe surprising new details about vanadium dioxide, one of the most promising neuromorphic materials. Using data collected by a unique “stroboscopic camera,” the team captured the hidden trajectory of atomic motion as this material transitions from an insulator to a metal in response to a pulse of light. Their findings could help guide the rational design of high-speed and energy-efficient neuromorphic devices.

“One way to reduce energy consumption in artificial neurons and synapses for brain-inspired computing is to exploit the pronounced non-linear properties of quantum materials,” said Zhu. “The principal idea behind this energy efficiency is that, in quantum materials, a small electrical stimulus may produce a large response that can be electrical, mechanical, optical, or magnetic through a change of material state.”

“Vanadium dioxide is one of the rare, amazing materials that has emerged as a promising candidate for neuro-mimetic bio-inspired devices,” he said. It exhibits an insulator-metal transition near room temperature in which a small voltage or current can produce a large change in resistivity with switching that can mimic the behavior of both neurons (nerve cells) and synapses (the connections between them).

“It goes from completely insulating, like rubber, to a very good metal conductor, with a resistivity change of 10,000 times or more,” Zhu said.

Those two very different physical states, intrinsic in the same material, could be encoded for cognitive computing.

For their experiments, the scientists triggered the transition with extremely short pulses of photons—particles of light. Then they captured the material’s atomic-scale response using a mega-electron-volt ultrafast electron diffraction (MeV-UED) instrument developed at Brookhaven.

You can think of this tool as similar to a conventional camera with the shutter left open in a dark setting, firing intermittent flashes to catch something like a thrown ball in motion. With each flash, the camera records an image; the series of images taken at different times reveals the ball’s trajectory in flight. 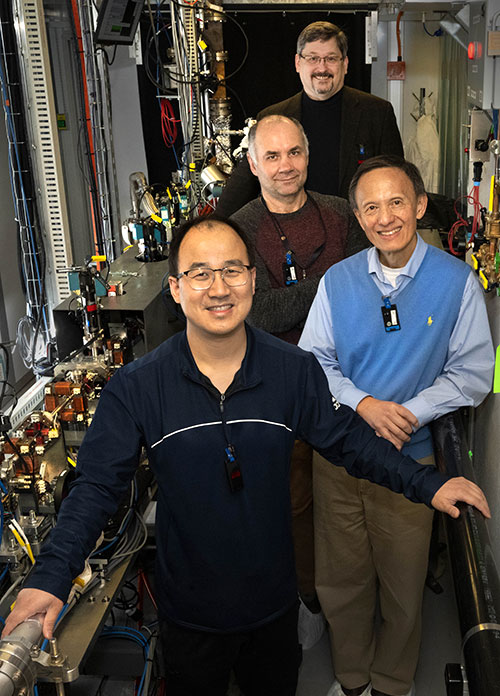 The MeV-UED “stroboscope” captures the dynamics of a moving object in a similar way, but at much faster time scale (shorter than one trillionth of a second) and at much smaller length scale (smaller than one billionth of a millimeter). It uses high-energy electrons to reveal the trajectories of atoms!

“Previous static measurements revealed only the initial and final state of the vanadium dioxide insulator-to-metal transition, but the detailed transition process was missing,” said Junjie Li, the first author of the paper. “Our ultrafast measurements allowed us to see how the atoms move—to capture the short-lived transient (or ‘hidden’) states—to help us understand the dynamics of the transition.”

The pictures alone don’t tell the whole story. After capturing upwards of 100,000 “shots,” the scientists used sophisticated time resolved crystallographic analysis techniques they’d developed to refine the intensity changes of a few dozen “electron diffraction peaks.” Those are the signals produced by electrons scattering off the atoms of the vanadium dioxide sample as atoms and their orbital electrons move from the insulator state to metallic state.

“Our instrument uses accelerator technology to generate electrons with an energy of 3 MeV, which is 50 times higher than smaller laboratory-based ultrafast electron microscopy and diffraction instruments,” Zhu said. “The higher energy allows us to track electrons scattered at wider angles, which translates to being able to ‘see’ the motions of atoms at smaller distances with better precision.”

“You would think the trajectory from position A to B would be a direct straight line—the shortest possible distance. Instead, it was a curve. This was completely unexpected,” Zhu said.

The curve was an indication that there is another force that also plays a role in the transition.

This animation shows the change in positions of vanadium atoms as vanadium dioxide switches between insulating and metallic states. This fast switching can be triggered by a tiny stimuli and changes the material's electrical resistance by 10,000 times or more—all promising properties for energy-efficient neuromorphic applications.

Think back to the stroboscopic images of a ball’s trajectory. When you throw a ball, you exert a force. But another force, gravity, also pulls the ball to the ground, causing the trajectory to curve.

In the case of vanadium dioxide, the light pulse is the force that gets the transition going, and the curvature in atomic trajectories is caused by the electrons orbiting around the vanadium atoms.

The study also showed that a measure related to the intensity of light used to trigger the atomic dynamics can alter atomic trajectories—similar to the way the force you exert on a ball can impact its path. When the force is large enough, either system (the ball or the atoms) can overcome the competing interaction to achieve a near linear path.

To verify and confirm their experimental findings and further understand the atomic dynamics, the team also carried out molecular dynamics and density functional theory calculations. These modeling studies helped them decipher the cumulative effects of forces to track how the structures changed during the transition and provided time-resolved snapshots of the atomic motions.

The paper describes how the combination of theory and experimental studies provided detailed information, including how vanadium “dimers” (bound pairs of vanadium atoms) stretch and rotate over time during the transition. The research also successfully addressed some long-standing scientific questions about vanadium dioxide, including the existence of an intermediate phase during the insulator-to-metal transition, the role of photoexcitation-induced thermal heating, and the origin of incomplete transitions under photoexcitation.

This study sheds new light on scientists’ understanding of how photoinduced electronic and lattice dynamics affect this particular phase transition—and should also help continue to push the evolution of computing technology.

When it comes to making a computer that mimics the human brain, Zhu said, “we still have a long way to go, but I think we are on the right track.”

This research was funded primarily by the DOE Office of Science. The 3 MeV ultrafast electron diffraction (MeV-UED) instrument was developed with a series of Laboratory Directed Research and Development awards and is operated and maintained at Brookhaven Lab’s Accelerator Test Facility (ATF)—a DOE Office of Science user facility.