Research reveals new tools for tailoring plants for range of applications, including carbon-neutral utilization of plant biomass for agro-industrial applications 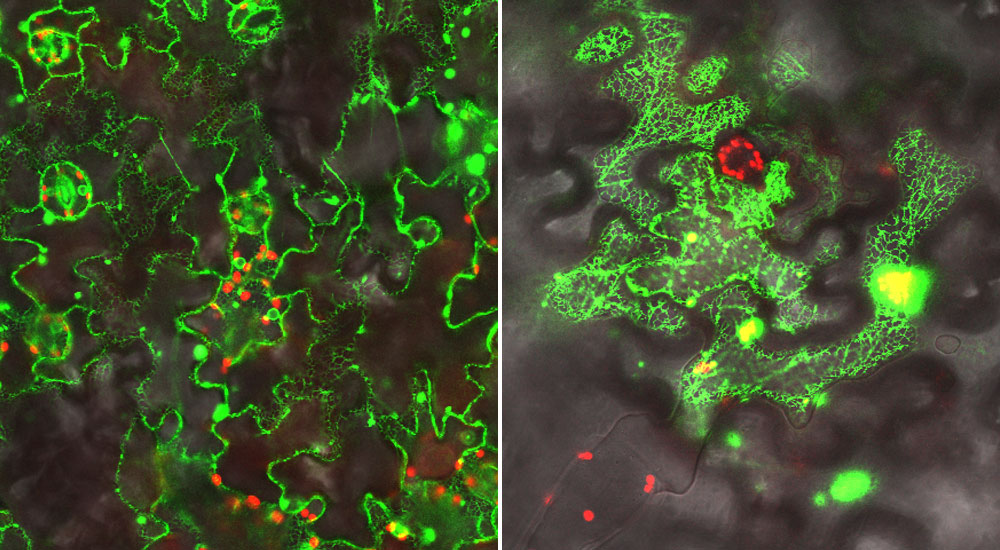 Fluorescent visualization of proteins in leaf cells (details below).

UPTON, NY—Plant biochemists at the U.S. Department of Energy’s Brookhaven National Laboratory have discovered a new level of regulation in the biochemical “machinery” that plants use to convert organic carbon derived from photosynthesis into a range of ring-shaped aromatic molecules. The research, just published in the journal Science Advances, suggests new strategies for controlling plant biochemistry for agricultural and industrial applications.

“Our study reveals the long-overlooked complexity and versatility of a key set of enzymes known as cytochrome P450 monooxygenases,” said study lead author Chang-Jun Liu of Brookhaven Lab’s biology department. “These enzymes operate as a synthetic machine to produce a wide range of aromatic compounds in plants—including compounds that build plants’ waterproof skeleton and vasculature, and others that provide defense from insect invasions and ultraviolet (UV) radiation.”

Uncovering the complexity of how these enzymes are regulated provides a new set of genetic tools scientists can use to precisely control which compounds get produced in different parts of a plant. The work could help facilitate long-term carbon storage and the carbon-neutral utilization of plant biomass for energy applications, improve plants’ nutritional properties, or increase their resistance to disease and harsh environmental conditions. 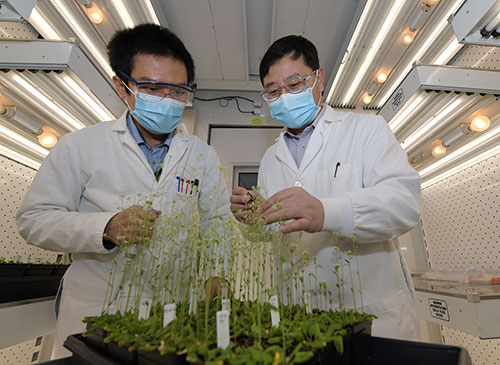 Scientists have long known that P450 enzymes do not work alone to determine the structural and biological features of aromatic compounds.

“To make P450 machines run, they need partner molecules to deliver electrons. These electrons act as a power source to fuel the machine,” Liu explained.

The scientists made these discoveries by analyzing the aromatic compounds that accumulated in different parts of plants in which the genes for different electron donors had been selectively deleted.

“By knocking out these genes, we were able to determine the contributions of distinct electron donors, identifying which ones drive the production of different aromatics in different parts of the plant,” Liu said. “Then, in yeast cells, we re-assembled different electron transport chains in combination with plant P450 enzymes to mimic the reactions in plants. Those studies helped us verify the contributions of individual electron donors and transport chains in supporting P450 activity.” 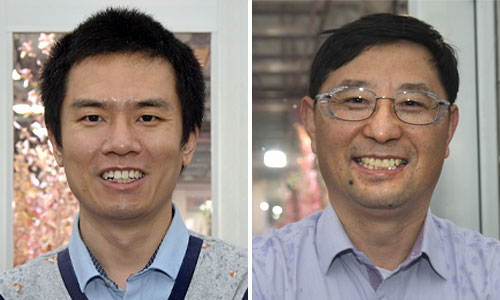 “Plants have evolved a number of homologous genes for electron donors,” Zhao explained, “so we needed to create plants with deletions of single genes and combinations of genes. We then examined the changes in the product distribution of aromatics over the course of plant development.”

“We also conducted a comprehensive comparative analysis of electron-donor gene expression and the abundance of electron source molecules in different parts of the plant and measured the electron transfer rates of different transport chains,” Zhao added.

The knowledge gained provides scientists with a new set of genetic tools they can manipulate to control aromatic production.

“We can manipulate particular electron donors—instead of the P450s—to suppress a distinct set of aromatics and achieve a desired outcome,” Liu said.

For example, reducing an aromatic compound known as lignin in stems could make plants easier to break down and convert to biofuels. Reducing levels of certain aromatics in seeds could improve their nutritional value. 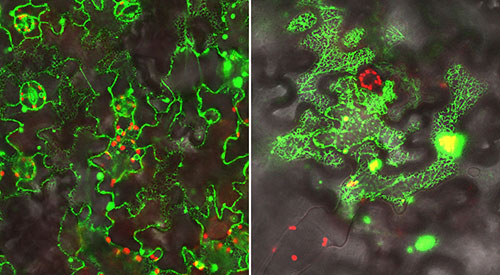 In addition to performing genetic and biochemical studies, the scientists used a green fluorescent protein (GFP) "tag" and microscope facilities at Brookhaven Lab's Center for Functional Nanomaterials to visualize the proteins they were studying in leaf cells. Left: Localization of a GFP-labeled electron donor protein along the endoplasmic reticulum (inner network of membranes) in leaf cells. Right: A GFP-labeled complex of the P450 enzyme interacting with the electron donor. In this case the scientists attached half of the GFP tag to each of these proteins; the fluorescent glow occurs only when the two halves come together as the proteins interact. (In both images the red signal comes from chlorophyl.)

“The detailed knowledge presented in this study allows us to make selected changes in one part of a plant without affecting another—like the accumulation of aromatic compounds that provide UV sunscreen in leaves,” Liu said.

“Exploring the molecular basis for the selective P450-electron donor association will help us further understand how the P450 system operates,” Liu said. “That, in turn, will allow us to potentially create more efficient enzyme systems to produce desired bioproducts and to enhance the conversion and storage of carbon taken in through photosynthesis.”