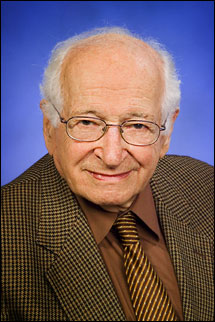 Gerhart Friedlander began his distinguished career at BNL in 1948 and retired in 1981, but he remained active in research for more than a decade afterwards. Nowadays, he gives talks annually to undergraduate students in BNL's Summer School for Nuclear Chemistry. In addition, he is a member of a committee of nine BNL scientists - all National Academy of Sciences members - who recommend candidates for major scientific awards.

Now, at the age of 91, Friedlander has been honored with the title of Senior Chemist Emeritus, and thus retains many of the rights, privileges and obligations of active employees. He has earned this status because of his numerous noteworthy contributions to the Laboratory's reputation as a world-class scientific institution.

"I am delighted to receive this honor," Friedlander said. "It has been most rewarding for me to spend the bulk of my career in Brookhaven's Chemistry Department. It's been a wonderful place to work, together with so many gifted colleagues, many of whom have also been good friends. My time at Brookhaven was during the golden era of science, when BNL researchers could pursue their scientific interests relatively unfettered by red tape."

In his early days at BNL, Friedlander led research in high-energy nuclear reactions at Brookhaven's Cosmotron, the first accelerator in the world to send particles to energies in the billion-electron volt region. Later, he pursued this research at the Alternating Gradient Synchrotron. With colleagues from several institutions in the U.S. and abroad, Friedlander pioneered the development of computerized Monte Carlo calculations of nuclear reaction mechanisms, helping to formulate theoretical models that are still used today. 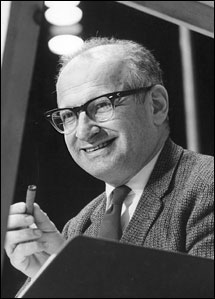 Both before and after his retirement, Friedlander played a leading role in advocating for and preparing the gallium solar-neutrino experiment, which eventually came to fruition as the international GALLEX experiment in the Gran Sasso Underground Laboratory in Italy. Brookhaven chemist Raymond Davis Jr. won the 2002 Nobel Prize in Physics for being the first to detect solar neutrinos, but he consistently detected fewer neutrinos than predicted by theory. The GALLEX experiment was aimed at determining why this was so and established that the cause of the discrepancy lies in the intrinsic properties of neutrinos.

Friedlander is senior author of the classic textbook Nuclear and Radiochemistry that he wrote with Joseph W. Kennedy. Written in 1948 with the title Introduction to Radiochemistry, it has gone through several revisions, has been printed in eight languages, and is still used today. Also, Friedlander trained numerous postdoctoral research associates during his career at BNL.

In the 1990s, Friedlander was editor-in-chief of a new magazine, Science Spectra. "While intended for a general audience interested in science, the articles were written by experts in their fields, including several Nobel Laureates," he said. "We covered all sciences, from astrophysics to psychology. As editor-in-chief I made sure that I, a non-expert, understood the essence of each article. So I learned a lot about many subjects."

Before joining BNL, Friedlander had been a scientist for the Manhattan Project at Los Alamos National Laboratory. He witnessed the explosion of the first nuclear bomb in Alamogordo, New Mexico, in 1945, and, at the time, he was elated that the project that he and hundreds of others helped to produce worked as planned. While he never wants to see the use of nuclear weapons again, he thought the use of the bomb was necessary to end World War II.

"I have no regrets," Friedlander said. "Working at Los Alamos was the most exciting time of my life. There was such a collection of bright people that I worked with and grew to be friends with. We were all cut off from the outside world due to security, and that led to a very close-knit community and an intense work atmosphere."

Born in Munich, Germany, Friedlander came to the U.S. in 1936, and he received his Ph.D. in nuclear chemistry from the University of California, Berkeley, in 1942. In 1942-1943, he was an instructor at the University of Idaho, and, after serving on the Manhattan Project from 1943 to 1946, he worked at the General Electric Research Laboratory. He joined Brookhaven Lab as a chemist in 1948, was named senior chemist in 1952, and served as chair of the Chemistry Department from 1968 to 1977.