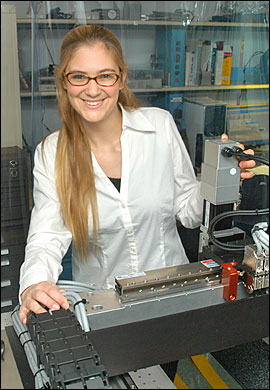 Rose Malinow's parents are both biologists, but the 2007 high school graduate will tell you that their love for life sciences isn't genetic.

"I really don't like biology," she said. "Math is different because it just makes sense; there's always a right answer. But more than anything, I just like to build stuff."

It's no surprise that Malinow, who graduated from Cold Spring Harbor High School, plans to study engineering at Georgia Tech in the fall. Recently, however, she's gotten a taste of a different scientific flavor - physics. Since January, Malinow has worked with Brookhaven physicists Peter Takacs and Paul O'Connor on specialized instrumentation for the Large Synoptic Survey Telescope (LSST).

To learn more about dark energy and dark matter, the LSST will take pictures of the sky using a gigantic camera within a ground-based telescope. Brookhaven has the lead role in developing the "film" for this camera, which is composed of electronic sensors - just as in a digital camera - but hundreds of times larger and sensitive to near-ultraviolet and infrared as well as visible light. These sensors, which will provide more than 3 gigapixels of resolution when complete (more than 500 times the amount of information captured by a conventional digital camera), are the focus of Takacs and O'Connor's group.

Specifically, the team is experimenting with charge-coupled devices (CCD), which will capture light that has taken billions of years to reach Earth from distant galaxies. The CCDs, each measuring just 42 square millimeters, are assembled into "rafts" made of nine sensors. Then, the rafts must be lined up to form a flat mosaic in the camera's focal plane. Precision is key here: the more than 200 CCDs must lay almost perfectly flat, with no more than a 5-micron (5 millionths of a meter) tilt in any direction. Malinow is responsible for figuring out just how to do that.

"All of these pieces are supposed to work as one camera together and if they're not all aligned, it won't take the same picture," she said. 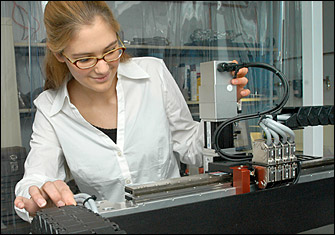 With a set of dummy CCDs and spacers, Malinow uses a special microscope to measure the height and orientation of the pieces at various points. Based on these measurements, she polishes down the spacers to adjust the thickness of the overall raft. Soon, she'll also experiment with built-in screws, which allow for fine adjustments without taking the pieces apart. Once the alignment technique is perfected, the group will move on to the CCDs that will be used in the actual telescope.

Malinow spends four days a week at Brookhaven, where she also assists in the Office of Educational Programs, which is funding her work.

"Rose is definitely not your ordinary student," Takacs said. "She has incredible talent and she is contributing a significant amount of work to this project. We are able to point her in a direction and she does it."

And Malinow enjoys the opportunity to be self-sufficient.

"They always ask me what I think the best thing is and what the next step should be," she said. "They are not teaching me all of the time and I really feel like they value my opinions."

Although Malinow says her experience with the LSST project isn't likely to transform her into a physicist, her curiosity has been stirred.

"It makes me realize how little I knew about physics," she said. "Dark matter, dark energy -- there's all of this stuff that I had no idea about."

"We're working to turn her into an engineer," Takacs said. "But maybe she'll get the bug to actually become a researcher, too."