From Turtles to Geckos, Love of Reptiles Is a Family Affair

When John Heiser was a teenager growing up in Seaford, his backyard adjoined a wetlands filled with frogs, snapping turtles, and garter snakes, and the Environmental Sciences Department researcher began what has been a lifelong love affair with reptiles. When he started attending Long Island University, he donated his collection of exotic species to zoos and museums, but his 22-year-old daughter Katie, who shares his passion for the creatures, has continued the family tradition. 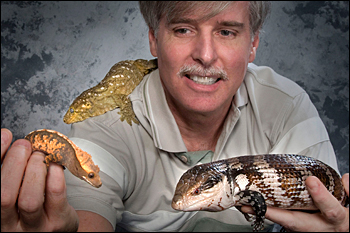 John Heiser holds some of the family reptile menagerie. The little crested gecko has no fear of Frank, a Blue-tongued skink. On Heiser's shoulder is a New Caledonian Giant gecko, the largest gecko in the world.

The Heisers currently keep more than 100 lizards and geckos in tanks and terrariums in their large basement, and John Heiser now serves as vice-president of the Long Island Herpetological Society.

"Reptiles have fairly simple care needs, can be left alone for long periods, and they live a long time," he said. "They have become the fastest-growing family pet. More than 15 percent of American households have reptiles now!"

When Katie Heiser was in first grade, she requested a lizard for Christmas and received a pair of Leopard Geckos. She recently graduated from the University of Maryland with a degree in molecular biology, and still counts 12 of the original family of geckos among her pets. She was a champion lizard breeder at the age of 11, appearing on Nickelodeon's "Figure It Out," a kids' version of "What's My Line?," and one of her geckos won her a trip to Florida. As an undergraduate, she interned for several summers at Brookhaven with Cultural and Natural Resources Manager Tim Green, assessing sunfish populations and also helped keep an eye on Tiger salamanders and Eastern box turtles on the Lab site. Along with Jeremy Feinberg, she appeared on the PBS show "Science Investigators," checking frogs for Chytrid fungus.

John Heiser's job of tracking the airborne transport of tracer gases has little connection with the family hobby, but he assisted Green with a project tracking hognose snakes after finding a large female hognose while running onsite. "They need to be a certain size to fit the radio-tracker, so it was an important find," he said.

Heiser considers his involvement with the Long Island Herpetological Society a family activity.

"Owners have gone from an 'oddball' group of people - the tattooed snake charmers -- to more family-oriented hobbyists," he said.

The group meets monthly, inviting speakers to talk about reptile conservation and captive care. Members assist with projects including locating and counting box turtles, frog counts, and a 24-hour "Bio-blitz" inventory of Long Island's birds, fish, reptiles and insects. They also do extensive educational outreach to schools, scouts, and other groups.

Heiser said the creatures have become so popular that breeding them in captivity keeps them from being taken from the wild, which can cause a species to decline.

"Some reptiles I keep for fun, and others for conservation," he said. "I want to make sure they are captive-bred or zoo stock. Since we started breeding electric blue geckos, the price went from $500 each to $40. High prices make them amendable to poaching."

Heiser often trades geckos with fellow enthusiasts. "I have reptiles from every continent -- except Antarctica that has none -- and every different eco-system from tropical rainforest to Saharan desert," he said. "They all behave differently, and all have something similar and something unique."

Heiser is also among thousands who regularly attend an international reptile show held every August in Daytona Beach, Florida.

"It's a nice atmosphere with lots of young families," he said. "And any reptile you can imagine can be seen there."