Meet Ron Kim, A Stony Brook Researcher of the Month 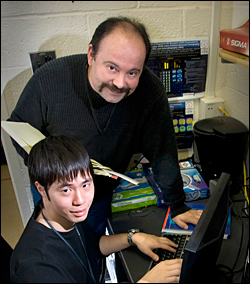 Kim is involved in many projects at Brookhaven and has already proven to be a valuable researcher as he studies the brain and what affects its behavior. "Drugs, obesity - I want to know why so many people are addicted. Understanding and curing addiction will help a lot of people," he stated.

"Ron is a soft-spoken, intelligent and hardworking young scientist who goes beyond just following instructions - an impressive quality for an undergraduate student," said Thanos. "Ron shows tremendous potential in continuing neuroscience research at the graduate level."

Kim came across Brookhaven's website while looking for a research position. "I was amazed by the work going on and the technologies being used at BNL," he said. He then contacted Thanos, who offered him an opportunity to work in his lab. Kim began work at the Lab in the fall of 2007.

A winner of Stony Brook's Researcher of the Month Award for undergraduate students, Kim received a grant that allowed him to travel to the Society for Neuroscience's 38th annual conference in Washington DC in November 2008. There he presented his addiction research done at Brookhaven, which suggests that those more prone to obesity are less prone to become addicted to cocaine.

"Those who are obese get more pleasure out of eating," Kim explained. "Others need to get pleasure elsewhere so they are more likely to become addicted to drugs." A paper on this topic will soon be submitted for journal publication.

Kim's research at BNL has also helped him in the classroom. "It's been great to listen in class and be able to say, 'I've done this,' or 'I know how this works,' from working at the Lab," he said. "My professors and the other students are really interested when I talk about what I'm doing and it creates a lot of good discussions."

Kim will graduate from Stony Brook in May. He will continue working towards a master's degree in the future, but does not have immediate plans. In the meantime, he will continue his research at Brookhaven during the summer of 2009 through DOE's Science Undergraduate Laboratory Internship program.