Keith Lewin Volunteers to Save Lives 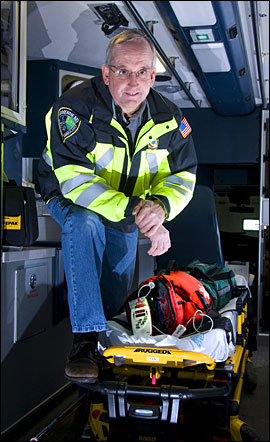 For the past 30 years, Brookhaven Lab's Keith Lewin has researched climate change by day, then gone home to answer ambulance calls on nights and weekends. As a volunteer, he has responded to more than 4,000 emergencies at all hours of the day and night -- including hundreds of car accidents and heart attacks, and has even helped deliver a few babies.

"It's not that I don't like to sleep at night," he said. "But there is a lot of satisfaction in helping people. That's why I do it.

Lewin started in this path in 1978, when he found himself at the scene of a car accident and didn't know how to help the victims, who fortunately were not seriously injured. Shortly after that, the Town of Riverhead sponsored an Emergency Medical Technician (EMT) course for people willing to serve on a new volunteer-based community ambulance service, and he and 16 others signed up. After becoming New York State certified EMTs, they started the Riverhead Town Volunteer Ambulance Corps, which was initially managed as a part of the Riverhead Town government. In 1996, they became a not-for-profit corporation, Riverhead Volunteer Ambulance Corps, Inc., to provide emergency medical coverage to the newly formed Riverhead Ambulance Tax District. Three charter members are still active, but Lewin is the only member who has responded to calls for all 30 years.

"We are one of the largest ambulance coverage districts in Suffolk County, and also one of the busiest." Lewin said. "Our ambulance district covers 56 square miles and 30,000 residents. In a typical year, we respond to just under three thousand emergency calls for assistance. Once you're trained and have gained some field experience, you can quickly assess what the real problems are and what needs to be done to help the patient. One of the unfortunate facts of emergency medicine is that the patient's outcome is often determined before you arrive. The flip side, which is one of big the reasons we keep doing this, is that sometimes your actions save the life of someone who otherwise would have died. To know you have saved another person's life is a pretty good feeling."

Much of Lewin's work at Brookhaven has been as part of the Free Air CO2 Enrichment (FACE) program, monitoring the effects of carbon dioxide on terrestrial systems, often at remote sites. In the field, his medical training has come in handy.

"A lot of the field research is done pretty far from civilization," he said. "Things can go wrong, and the consequences can be severe. You need to be able to recognize potential dangers, and know what medical equipment should be available, just in case. "

At a forest research site in Florida, Lewin made sure the first aid kits contained snakebite kits, but his training also taught him not to overreact.

"We checked on the species of rattlesnake common to this area, and learned that you have hours to get someone to the hospital after a bite," he said. "So, the important thing wasn't immediate treatment of the snake bite, it was knowing the location of the nearest hospital."

Lewin also had a Lab co-worker run into his office complaining that she had a grape stuck in her throat and requesting him to perform the Heimlich maneuver to dislodge it.

The Heimlich maneuver can be a lifesaver for someone who is choking, but it also carries significant risks of internal organ damage and of turning a partial airway obstruction into a complete airway obstruction. That's where training and experience come in.

"She was breathing well and could talk in full sentences, so performing the Heimlich maneuver would have been more dangerous than leaving the grape where it was," Lewin said. "So I calmed her down and called BNL Fire/Rescue to take her to the hospital, where there were facilities and doctors able to handle both the immediate problem of the grape in her throat and any complications that might arise as they tried to dislodge it. As it turned out, the grape popped out on its own in the emergency room."

Lewin's wife, Barbara, and three grown children joke about years of "gruesome" dinnertime conversations, but his eldest daughter, Kimberly Schmidt, followed his example and became a physician's assistant. Second daughter Anita is a photographer and son Robert works in industrial design. For his volunteer efforts, Lewin was honored as 2008's Civic Person of the Year by the Riverhead News-Review. In February, he was part of the celebration for the organization he helped create when the Riverhead Volunteer Ambulance Corps held a 30th anniversary dinner to honor the hundreds who have participated over the years.

"In general, an emergency medical services volunteer will devote the equivalent of a week's worth of work to their community every month," Lewin said. "We can give them very little in return but thanks and kudos for their efforts. "